An electron and a proton are moving on straight parallel path with same velocity. They enter a region of semi infinite magnetic field perpendicular to velocity. What will happen there? Will both of them never come out of the field? Or they come out with same velocity at same time?

Hint: A semi-infinite uniform magnetic field would be one which would be described by something like this: $B=0$ (for $x<0$) and $B=constant$ (for $x\ge0$).

The question describes a situation of this sort: (The $X$s indicate that the region has a magnetic field directed into/out of the page): 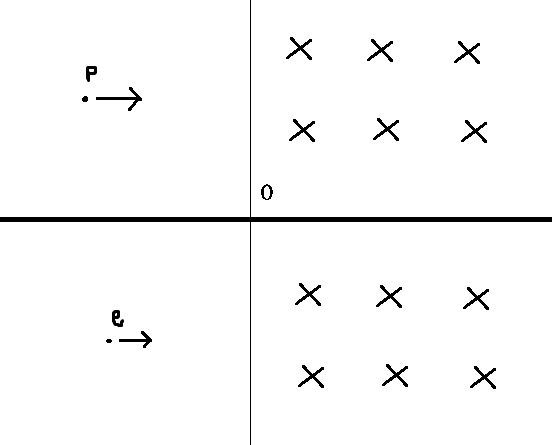 The spirale paths are from different curvature. The electrons spirale is more bended then the protons. This is because they have the different masses.

Last not least why they move in spirale paths and not in a circle. This is because both particles emit photons when get deflected. Photons have momentum and this momentum they get from the particles which loose this moment and move slower and slower until they stop.