Why does spinning a golf ball one way make it go further than spinning it the other way?

In golf, you'll often hear people say that one person hits the ball further than another because the one person "draws" the ball while the other "fades" it. I want to know why the direction of side-spin could possibly matter?

A draw is when a (right-handed) golfer hits the ball so that it turns from right to left due to the side-spin imparted on the ball.

A fade is when a (right-handed) golfer hits the ball so that it turns (you guessed it) from left to right due to the side-spin imparted on the ball.

Now, I am fairly certain that this phenomenon has to do with primarily two things: a change in flight trajectory and a change in spin caused by these two different ways of contacting the ball.

One of the reasons I say that is that this extra distance gained from hitting a draw on the ball almost always manifests itself in additional roll. That is, the ball that is hit as a draw does not necessarily land further than the faded ball, but it will end lying further by a fairly significant margin (significant in golf being 10+ yards). I imagine that this would mean spin is playing a large role (i.e. more or less backspin) combined with a different trajectory (a shallow trajectory would likely result in more roll).

Which leads me to what I find to be the interesting part of the problem. This shot which is hit as a draw will often fly further than the same shot (meaning same force applied to the ball) if the ball is hit completely square so that no side-spin results from the shot. It seems to me that both the draw and the fade should result in a deviation from the "no side-spin shot" by losing total distance, but this is not the case. One possibility for this is that the shallower shot trajectory of the draw may actually be a "better" shot trajectory than the "no side-spin swing".

Some details which may be useful to know, the usual loft (angle away from 90 degrees) of a driver is 9.5 degrees. Meaning that this club face would be 99.5 degrees from the horizontal (that information might be hard to use though). Also, drag plays a significant role in a golf shot, so maybe there is less drag imposed on the drawn shot which improves distance somehow.

My problem is that I don't understand drag and have no formal education on the Magnus Effect and haven't gotten around to reading about it.

I hope that the answer to this manifests itself in interesting Physics, rather than just being impossible to answer at all.

The golf ball is at the origin of an $x,y,z$ coordinate system (see Fig.1). $x$ and $y$ are in the horizontal plane. The golfer wants to project the ball in the $y$ direction. 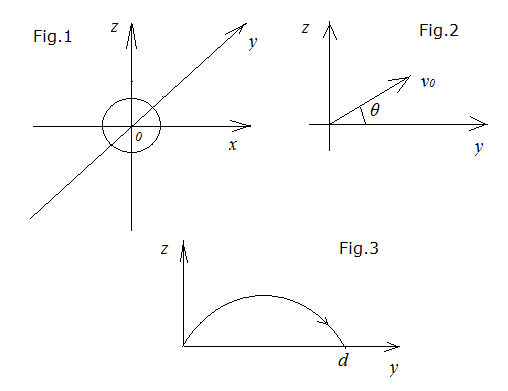 The ball is hit in such a way that it acquires an initial speed $v_0$, at an angle $\theta$ (see Fig.2). The ball will now follow a more or less parabolical trajectory (in the absence of air drag it would be perfectly parabolical). This motion is known as tranlational motion.

Now the golfer may want to impart on the ball an additional rotational motion, known as spin. A rotating object always rotates about an axis, so we can distinguish three possibilities.

b. Rotation around the $z$ axis, in golf known as slice or hook.

c. Rotation around the $y$ axis (axis of translation): not important is sport but this spin is imparted by the rifles of a gun barrel to a bullet and increases stability of the bullet in flight.

Due to the Magnus effect, in air the rotation of the ball causes a drag force acting on it, perpendicularly to both the air flow and to the axis of rotation, because the airflow has been deflected in the direction of spin. Back spin thus causes extra lift and extends the flight path somewhat (see Fig.4). 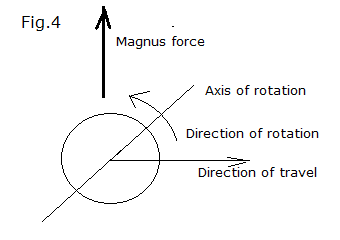 Similarly, slice or hook causes a horizontal force to act on the ball, creating (left or right pointing) curvature of the trajectory.

Due to conservation of angular (rotational) momentum, spin also has consequences for the ball’s post-impact trajectory. It’s well known that tennis ball with backspin will travel faster and at lower angle (bounce) after hitting the floor, compared to a spin-less ball. This is similar for a golf ball.

A ball with spin/hook will also experience a slight change in horizontal direction on impact with the floor.

6. From an energy perspective:

One could argue that imparting spin on a ball is a form of loading it with extra kinetic energy.

A spinning ball that’s also translating through the air has a translational kinetic energy at the start of the trajectory:

But a rotating body also has kinetic energy:

During flight, part of the rotational kinetic energy is converted to work by the Magnus force.

Gert's answer covers the physics of the motion well, but glancing through I didn't see it address the issue of why one spin travels farther (rather than just in a different direction) so consider this a supplement.

I see you specified in your definitions of draw and fade that they are for right-handed golfers. This is important because due to the geometry of a golf swing, with the golfer standing to one side, a strike that imparts side-spin will also impart top- or backspin on the ball. So an ambidextrous golfer could have a right-curving shot that sails away, switch hands, and make another right-curving shot that falls short, without any other changes in technique.

A draw and fade is backspin on a tilted axis less gear effect.

From a basic standpoint neither hits the ball further than the other. Assuming all factors like Launch angle, Ball speed Spin loft Backspin:gear effect ratio

are all equal then it will be equal.

The real question is which is easier to hit consistently given the factors required to pull one off efficiently without negative loss. Secondly Even if you choose one or the other as a preferred swing, golf courses are not designed to make one swing a be all end all.

Now it does take less physical effort to draw a ball as far a a fade but not because a fade style swing is harder.

There is more loft at impact with a fade and that reduces MOI. Yet the effort was the same. It is when you have to swing faster to make up for the transfer of energy loss due to loft that the fade becomes harder yet again it has been also demonstrated that draw spin is trickier to control for a righty.

It has already been proven that a draw requires less deviation between the swing path, face alignment to path and angle of attack to produce counter clockwise spin for a right handed golfer. That means for a lefty the fade is counter clockwise spin. So technically a fade or a draw is not superior because in right hand swing or left hand swing player the same rotation that produced a draw for the righty is producing a fade for the lefty. Look at it from the others hand swing perspective instead of a one hand swing perspective called balancing the equation.

Effects are the same in relation to distance if we control for initial ball velocity and other launch variables like spin, launch angle, etc.

With a draw you have an extra lever: your right hand is probably rotating the clubface through impact. With a fade this extra lever does not exist: right hand is led by left hand and holding clubface open. Thus clubhaead speed at impact is likely to be lower with a fade.

You can certainly point out exceptions of golfers who hit the ball further with a fade than a draw, but this usually violates the first principle: this is so because some other variable say like maybe spin rate is being optimized.

Given: A draw has a lower trajectory and carries further and rolls more. A fade has a higher trajectory, carries shorter, and rolls less. Lastly a well hit draw feels more powerful than a well hit fade.

The distance question can mostly be answered with the angle of the club face to horizontal at impact. Elevation is determined by dynamic loft at impact and backspin. If the loft is lower the ball rebounds on a lower trajectory with less back spin both result in a lower flight. (Of course a flight too low would result in a shortening not lengthening of the shot, but we'll assume a constant swing speed etc. near the club's design ideal.) Therefore we must conclude that a draw swing has a lower dynamic loft than a fade swing.

As we know the fade and draw are the result of sidespin (or tilting of the the spin axis). Assuming an exactly neutral club face at impact with the exact same static loft angle, the transfer force on the ball is the only variable left that can impart sidespin. So when the club path impacts the ball from either side of the straight target line, it imparts side spin.

But why does the loft/backspin change from a draw swing to a fade swing, and why does the actual power of the swing seem better with a draw? This is the really interesting part. It happens because of two things that both affect mechanical advantage--essentially power of the impact transfer which is greater for the draw.

The bigger mechanical advantage of a draw swing though, happens because we stand to the side of the ball and the swing path is an arc. You can understand this best by thinking in terms of force vectors. Lets look at the extreme. You have a very open club face and cut across the ball from outside the target line, then the vector of the club face and the vector of the path create a very wide angle to each other. Contrary, if the swing path is from the inside with a closed face, the two vectors form a narrow angle. When you summate them the narrow angle results in a higher vector length ie. power. Because the swing is always an arc from the side we stand on (even when cutting across the ball from the outside-in), it is mechanically more powerful to draw the ball rather than fade it. Hence when we "cover" or "gather" or hook-spin the ball we can impart more power than cutting across it. If more power is transferred directly with less being dissipated into sidespin, at the same swing speed or force, the ball goes further, even if elevation where the same.

Not the answer you're looking for? Browse other questions tagged newtonian-mechanics drag or ask your own question.

1
Does a ball spin more from left to right than it does from right to left?

4
What is the optimal weight for a golf ball?
7
In tennis, why does topspin serve bounce higher than flat serve?
2
Golf: spin direction resulting from striking out of the toe
1
Does a ball spin more from left to right than it does from right to left?
4
Does the Inertia of a Cue Ball Affect its Reflection Angle off a Resting Billiard Ball?
4
In golf, what influences more on how far the ball travels?
8
Will a tennis ball go further if i hit it with the side of the racket?
1
Rolling ball hits the wall
0
Billiard ball with side spin