Theres a photo on the wikipedia page Quantum Entanglement there's a image of a photon being split into two entangled photons via crystal. I used this picture to demonstrate the scenario below.

If this is possible, I'm wondering what the relationship the children of an entangled photon and it's cousins, and the relationship if child to aunt / uncle particle. I'm curious toward the behavior of the spin relation between a family of entangled particles. 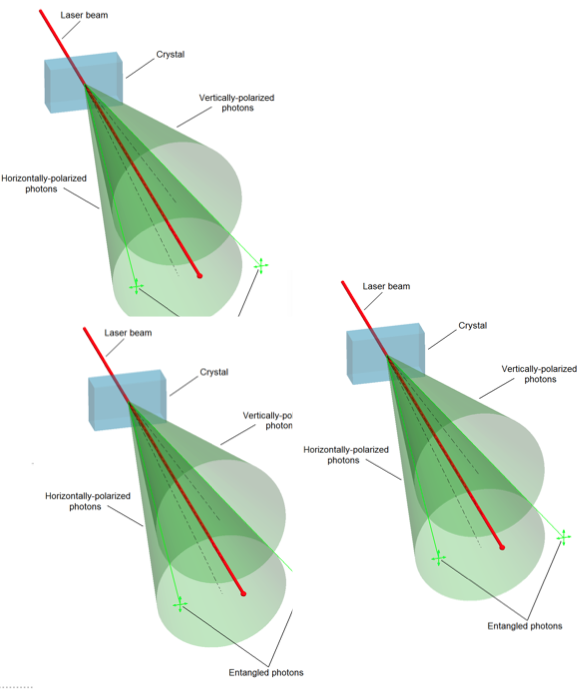 Im interested in a notion where all particles in the universe are more hierarchically related then we think.

A laser beam emerges from zillions of coherent photons, i.e. their phases with respect to each other and the beam are know. The wavefunction describing individual photon contributions may be explored. This is what the description is about.

A photon beam cannot be split into two entangled or not photons as it is composed out of zilions of photons. The beam itself can be split, and because the quantum dynamics solution for a laser beam is known the phases between individual photons may be also known.

It is just stating that a photon from the vertically polarized beam has a counterpart in the horizontally polarized beam. From the zillions of photons there are pairs that are entangled, i.e. if you measure the polarization of one photon you know that there exists another photon with the complimentary polarisation. That is all. No family trees and relationships because it is not the same photon that does the gymnastics .

Not the answer you're looking for? Browse other questions tagged quantum-mechanics quantum-spin quantum-entanglement or ask your own question.

5
Tracking photon color in Bell experiments
0
Would synchronized dancing be a good way to describe entangled atoms to a laymen?
0
Does the Delayed Choice Quantum Eraser require the signal and idler photons to be entangled?
4
Why is splitting light using a beam splitter an example of entanglement?
3
Why use 2 nonlinear crystals in conjunction for SPDC?
2
Is everything entangled?
4
Are entangled particles indistinguishable?
1
Question on the creation of an entangled photon pair in a specific realization of the EPR-Bohm Experiment
1
Do we always have to "create" new particles to entangle? or can we entangle already existing particles?