What ice pack formula can hold the largest energy difference?

I recently bought some Freez Pak brand ice packs. The label advertises: "Colder Than Ice". I realize now that it's just a stupid marketing claim, but at first, it got me wondering if they had some special formula in them.

Some possibilities of different formulations I thought of:

Number 3 is the most likely scenario because simple water is the cheapest.

Creating My Own Ice Packs

The principle here is a substance that can hold the biggest difference in energy. Temperature is irrelevant because given 12 hours, anything in my freezer will be at the same -15$^\circ$C.

Let's assume when the ice pack warms up to 5$^\circ$C it is no longer useful for keeping food fresh. I will be filling 1 liter bottles.

That phase change gave me a ton of energy!

Unfortunately, alcohol won't pass its freezing point of -114$^\circ$C in my kitchen fridge. :/

Wow! That would be a worthless ice pack!

Glycol has a freezing point at -13$^\circ$C! My freezer can do that.

Glycol's Specific Heat = ~.5 (? I couldn't find this one, but estimated based off graphs)

Nope! That's still half the capacity of water.

What have I done wrong in my math?

What materials and/or properties have I overlooked?

I will not answer your question directly; only give you some tools that should help you answer the question (in practice) yourself.

To focus the attention, find below a typical heating/cooling diagram for a frozen pure substance. 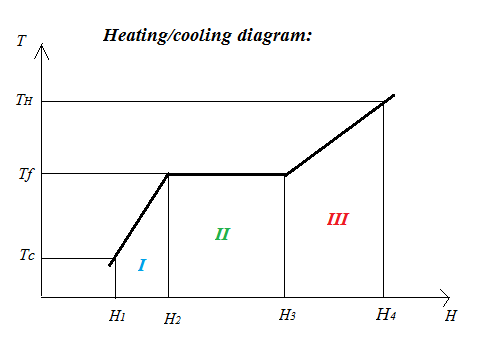 Three significant temperatures are indicated on the $T$ axis:

$T_c$: this is the temperature of the cold pack while in your freezer.

$T_f$: this is the melting (fusion) point of the material in the pack.

$T_H$: this is the temperature after the pack has been carrying out its function for some time. Often it will be room temperature.

The horizontal axis marked $H$ represents Enthalpy. Enthalpy is what is known in physics as Heat Energy. $H_1$, $H_2$ etc are various heat energy contents of the pack as it slowly heats up from $T_c$ to $T_H$.

You’re quite correct that the best pack (there are other, practical criteria, of course) would be the one that on heating would extract the highest amount of Enthalpy from its surroundings (typically a cooled picnic box or such like) to heat up from $T_c$ to $T_H$. So let’s analyse this.

The overall Enthalpy the pack has to absorb is simply $\Delta H = H_4 - H_1$. We can calculate this as follows.

The heating diagram is divided in three areas marked $I$, $II$ and $III$.

Area $II$: in this area the pack is melting (during melting $T$ stays constant at $T_f$). The Enthalpy change for area $II$ is given by:

We can now conclude a few things, in order to maximise $\Delta H$:

This general treatment was for a pack filled with a single pure substance but can as an approximation also be used for mixtures of substances, by adjusting the masses, latent heats and specific heat capacities.

15
Thermodynamics of supercooled water
4
Heat capacity of solids vs liquids $s_{liquid} = 2\ s_{solid}$
8
Does an ice cube change its core temperature as it melts?
38
Does too little ice make my martinis watery?
0
Finding the partition function with degeneracy levels
7
Why do different materials have different specific heat capacities?
0
Deriving the time needed until Thermal Equilibrium
0
How does salt begin to melt ice?