I have searched the web and found that optical switches are activated either through mechanical or electro/magnetics. Making them sort of Optomechanical or optoelectronic switches.

Lets exclude electromagnetically induced transparent switches. Are there other solid state based optical switches at are fully operated using lasers only?

I would be grateful if you could include link and/or references.

A sum-frequency system with a "hot" mirror could act something like an optical switch: 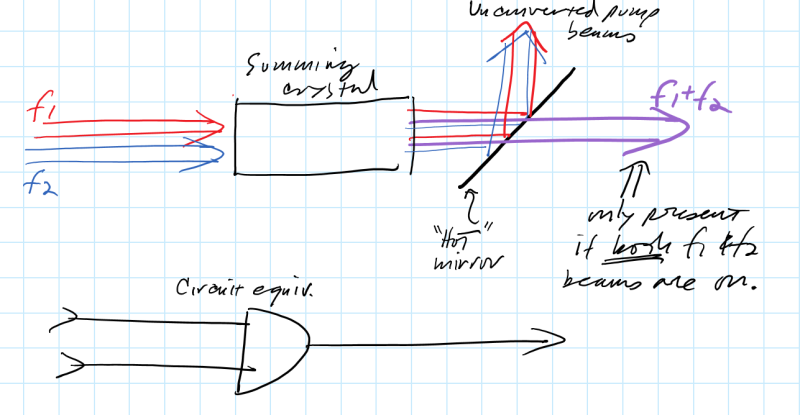 Unlike a switch, the output frequency will be different from either of the inputs.

Edit: For an example of sum-frequency generation crystals see:

An acousto-optical modulator can act as an optical switch, with the switching controlled by the application of radiofrequency power. An AOM operates by setting up a compression wave in a crystal from which the light diffracts. Light which is diffracted into at least the first order can then be used for whatever you like.

However, there are some caveats -- it's not possible to diffract 100% of the light into one of the orders -- 40-50% would be quite good. When the switch is "off", there is still a small amount of power that leaks through, and the AOM also shifts the frequency of the laser by a small amount (the RF frequency).

Not the answer you're looking for? Browse other questions tagged optics solid-state-physics quantum-information laser quantum-optics or ask your own question.

5
Optical laser pumping and reflectors
2
Silicon Laser and Laser mirrors
0
Is glass considered as a linear optical medium?
16
How does a laser emit light in a coherent state?
0
Laser: Looking for name for optical component
2
Can we tune the Mach-Zehnder modulator or equally mix it with a pure RGB laser signal with a broadband optical source at the same efficiency?
0
Photonics, twist in laser beam, optical vortex
1
Unexpected wavelength jumps in a laser observed: a fundamental noise source in VCSELs?
1
Do the results of this laser experiment demonstrate nonlinear optical phenomenon?