Intepretation of area under velocity-time graph for a bouncing ball 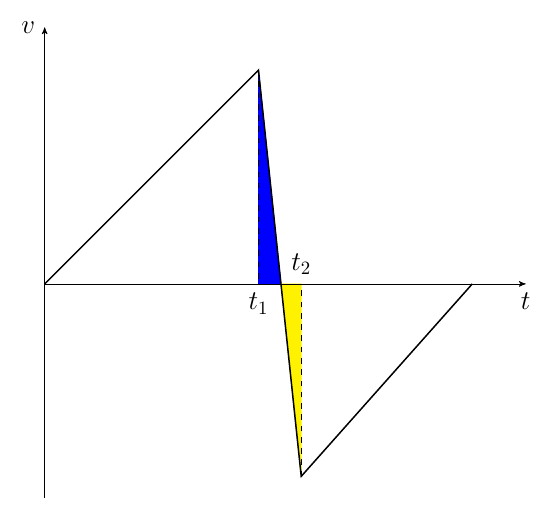 Here is what confuses me. As the area bounded by the velocity-time graph can be interpreted as the distance traveled. I don't really understand what is the interpretation of the blue and yellow piece shaded in the graph below. For a ball hitting the floor at a speed of about 10 metres per second, with time of impact of about 0.1 seconds, the calculation shows this distance could be as large as 0.5 metre, way larger than the size of a tennis ball. If the time of impact is even larger, this distance would increases in proportion as well. But obviously during this time, the ball does not go anywhere but hits hard with the floor.

I guess the solution lies in the fact that the ball cannot be treated as a point mass anymore during the time of impact, as the velocities at different positions inside the ball would be all different. But I still have no idea about what these two coloured area represent. Is the distance interpretation wrong? Or should this graph be understood in a different way?

Yes your reasoning is completely right but is important to add some information.

The diagram you show has no information on the ball size and assumes all the mass is concentrated in the center of mass, which for a spherical and isotropic ball should be in the geometrical center.

Now, at the moment of impact $t_1$, the border of the ball will start touching the ground and the ball will start deforming. But in the diagram only the continuous decrease in speed of the center of gravity is shown. So that area characterizes the vertical movement of the center of gravity, which as you correctly deduced for the values you gave, is $0.5m$. So this already tells you that the ball cannot be a tennis ball, it has to be one with a diameter larger than that.

But wait, there are further constrains that can be drawn from the diagram. The fact that there is a line from $t_1$ to $t_2$ means that during this time the force was constant (straigth line = constant acceleration). This can only be the case if the deformation of the ball was small enough that it can be considered an elastic hit. This is true only deformations small compared to the radius of the sphere, because larger deformations, even in elastic bodies, provoke reaction forces even larger, and the line would turn into a parabolic curve (for $F=-kx$), or even cubic.

If we simply equate the displacement of the center of mass to the vertical compression of the ball, then if it is displaced $0.5m$ the actual stretching of the spring is twice that amount: $1m$. So the ball deformed $1m$, but this has to be a small deformation!?

Small in this case would mean that the vertical radius should not be compressed more than a certain amount, which would depend from material to material, but I would say it should not be more than $10\%$ in general. This would mean that if $1m$ is $10\%$ of the total diameter, the actual sphere you are describing there should have a $10m$ of diameter!

So, on the other hand, the response time will have to be considerably smaller for a tennis ball right? Let's we assume the same conditions of elastic force, and maximum $10\%$ deformation. The tennis ball is about $7cm$ diameter, which means it can only have compressed $7mm$ and this is twice the distance traveled by the center of mass: $3.5mm$. The you get for the same initial velocity you gave $t_2-t_1 = 0.7ms$!

Not the answer you're looking for? Browse other questions tagged kinematics velocity or ask your own question.

0
Experiment to measure initial speed of high speed tennis ball?
0
Velocity time graph for a ball thrown vertically upwards and falling back down to be caught again by a person
0
Instantaneous Velocity after bouncing off a wall
1
Kinematics of bouncing ball
0
Distance and Displacement from a velocity vs. time graph
0
Acceleration of a Bouncing ball when it hits the ground
1
Why does calculating relative velocity with vectors yield diferrent results than with distances?