This article on Carnot's theorem states that

All reversible engines that operate between the same two heat reservoirs have the same efficiency.

and in the latter proof

No irreversible engine is more efficient than the Carnot engine operating between the same two reservoirs.

These proofs derive the result that the Carnot engine is the engine with optimal efficiency which are in accordance with my textbook being used for self study (Resnick and Halliday 10th edition, though I haven't referenced Callen's book which is more advanced since I wish to brush up on some mathematics skills). However, I have two questions predicated on the same premise:

Premise: The article claims that all heat engines are less efficient than a Carnot engine.

#1: Why then can't an irreversible engine not be as efficient as a Carnot engine (for this doesn't violate the result of the latter proof, which simply states that it cannot be more efficient)?

If Callen deals with this, citations are appreciated. Also, any links including references to the early thermodynamicists (Clausius, Gibbs, Maxwell, etc.) are appreciated. Even though Carnot worked under the caloric theory of heat, links to his work and his reasoning are also appreciated.

The proof behind Carnot's upper limit posed on the efficiency of heat engines is more robust than this. The quotes you've pasted are among the various statements of the second law of thermodynamics. Here I'll sketch for you some of the ideas of the proof, mainly to show where these formulations (related to Carnot) of the second principle come from. Inevitably I'll repeat most of the things you probably already know, but they're repeated more for discussion purposes. Towards the end I'll touch on your two main questions more closely.

Now from a purely schematic point of view, we know that one such engine should be described by a thermodynamic cycle maximizing the area under the curve in the PV diagram! So Carnot set out to come up with a thermodynamic cycle that satisfies this. Remember that the net useful work provided by the system is equal to the area enclosed by one closed cycle, so intuitively we already have an idea of the type of expansions and compressions the cycle should be made of: i.e. the cost of compression being minimised by compressing at cold (lowest $T$), and the expansion yielding the maximum amount of work by expanding at hot (highest $T$), hence the choices of the main two reversible (no form of loss whatsoever, no entropy production) isothermal compression and expansion parts of the Carnot cycle. Here's the PV diagram taken from wikipedia ("Carnot cycle p-V diagram". Licensed under CC BY-SA 3.0 via Commons): 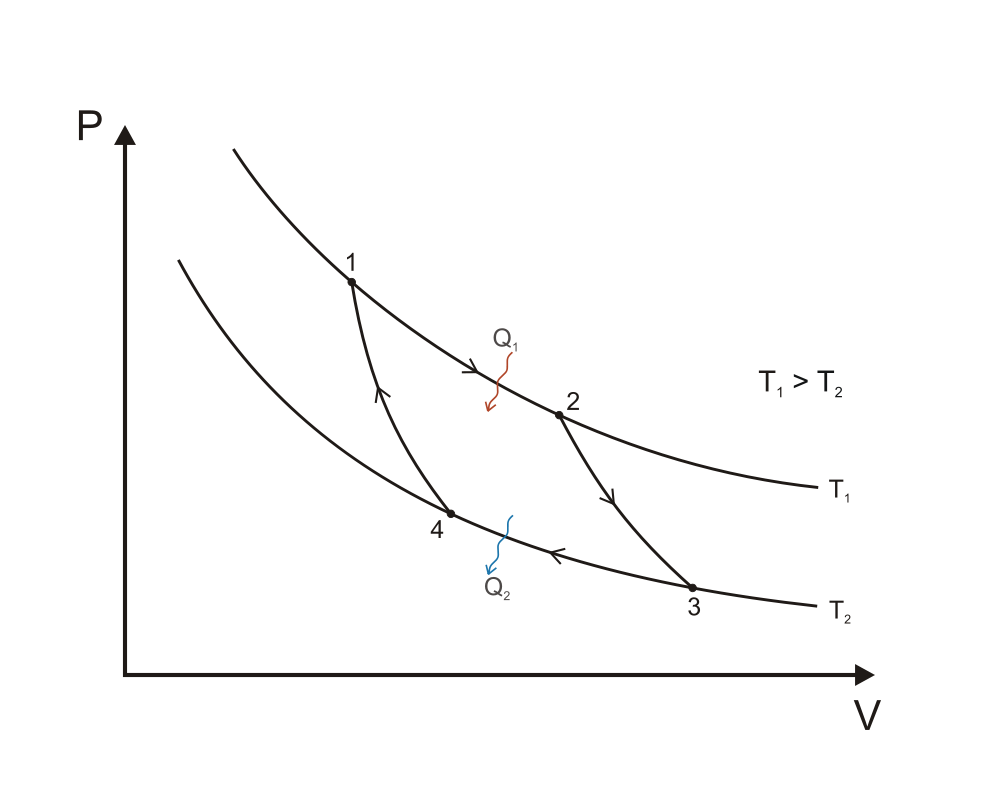 A quick reminder of each step involved along with the work/heat provided to outside (minus sign) or received (plus sign):

All the ingredients there to calculate the thermal efficiency $\eta_{Carnot}$, given by the net work provided by the system to environment divided by the total received heat during one cycle (important idea is to use the adiabatic transformations to express $W$ in terms of $T_{1,2}$ and $V_{1,2}$). Once done, it should be a unique function of the two heat bath temperatures (in Kelvin): $$ \eta_{Carnot} = \frac{T_1-T_2}{T_1}=1-\frac{T_2}{T_1} $$ To see why any irreversible engine would have a lower efficiency, replace any of the 4 steps of the cycle by an irreversible one and re-calculate the efficiency, e.g. let's replace the 2 to 3 adiabatic expansion by an irreversible process, for our purposes a simple free expansion (see Gay-Lussac) will do, during which no work is done and $T_1$ remains constant, this process is immediately followed by another irreversible process, corresponding to the heat exchange (hence the irreversibility) with the cold bath as soon as contact is established, to reach $T_2.$ If all other 3 steps are left unaffected (i.e. reversible), the efficiency becomes: $$ \eta = \eta_{Carnot}-\frac{C_V (T_1-T_2)}{RT_1 \ln{V_2/V_1}} < \eta_{Carnot} $$ To further convince yourself, you can repeat the calculation for the replacement of any of the other 3 steps, by an irreversible one, and you will always find $\eta < \eta_{Carnot}.$ If you prefer, in terms of entropy, any irreversible process can be shown to have less heat flow to the system during an expansion and more heat flow out of the system during a compression, which simply means more entropy is given to environment than received from it, which consequently transforms the Clausius theorem into an inequality, i.e. $$ \oint \frac{dQ}{dT} \leq 0 $$

Regarding your second question, the key idea is that no other engine can yield a greater efficiency than Carnot's (which conceptually we now expect it to be true, remember the earlier points on how to build a cycle that maximizes $\eta$), but this does not mean that there are no other engines with reversible transformations that cannot yield the same efficiency, take e.g. the Stirling engine (a 4 step cycle again):

which should convince you that Carnot's cycle is not unique. To sum up, all this leads yet to another statement of the second principle of thermodynamics: There's no machine performing a cyclic process with an efficiency greater than $\eta_{Carnot}.$

It sounds like you'd enjoy reading some classic books on thermodynamics; one especially good one is the one by Fermi. It has lots of nice arguments; short and simple, but logically airtight.

For your second question: all reversible engines have the same efficiency. All of these engines pretty much look the same: you're only allowed to transfer heat from the reservoirs isothermally (with the engine's material at the same temperature as the reservoirs), and you're allowed to do anything else in between. Carnot does adiabatics in between, but you could do isochorics. Or an adiabatic one way and an isochoric the other. Or an isobaric, then an isochoric, then an adiabatic, etc. There are plenty of possibilities.

Reversible engine is the most efficient and all reversible engines have the same efficiency. It can be shown like this: If there is a machine X that is more efficient then the R (reversible) engine then we could reverse the R to give warm reservoir its heat which X took but to do that we would have to take more heat from cold reservoir then the X because X is more efficient by assumption. In total, work of X, reduced by work of R in reversing, comes only from takeing the heat from the cold reservoir and that is not possible by the second law. Kelvins formulation of the second law: It is not possible to have such a change of a state of a system where only effect would be to completely turn some ammount of heat into work. It is a claim that heat goes only one direction and this is somewhat fenomenological statement of the second law.

Not the answer you're looking for? Browse other questions tagged thermodynamics heat-engine carnot-cycle or ask your own question.

9
Can the efficiency of a thermodynamic cycle be worked out from a pV diagram?
0
Carnot engine (theorem) Proof