Was Leverrier-Adams prediction of Neptune a lucky coincidence?

According to historians both Adams and Leverrier used Bode's law to guess the distance to Neptune, which led to a vast overestimation of its orbital period (Adams - 227 years, Le Verrier - 218 years, actual - 165 years). Apparently, their estimate of Neptune's mass was also largely off. Nonetheless, both came up with a position in the sky close to each other's, and to the actual one:"The only actual value they were close to, if one looks at the table, is the location in the sky it would be found. It is possible that both men were simply lucky with this. We shall never truly know."

This is somewhat mystifying. The first thought is that their errors in distance and mass "compensated" each other, although I am not familiar with this type of calculation to tell if this makes sense. But it should be possible to tell if they were "simply lucky" or not. For instance, is the prediction of Neptune's position in the sky based on the parameters they assumed correct only for a short time period or more broadly? Is it the case that visible orbital deviations of Uranus only determine some function of Neptune's distance and mass, but not each value separately? And was their value close to the actual one? Did anybody look into these kinds of questions? Is there a "reason" for the correct prediction despite the erroneous estimates, or were they indeed "simply lucky"?

Although this may not be what you're looking for... They weren't "simply lucky." In fact, they didn't use Bode's law at all- they used calculations based on Neptune's supposed gravitational effect on Uranus. In fact, had the two used Bode's law, they would never have found Neptune, as the Bode "law" would predict a completely different location. (This is when the "law" became discredited) 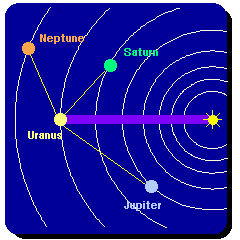 Astronomers noticed that the then-newly discovered planet, Uranus was appearing at its predicted positions later than what would be expected- this meant something should be tugging on it from behind, the opposite of its direction of motion. From the angle of this apparent slowing, astronomers could tell what angle the perturbing "bully" planet was from- applying this over multiple places in the Uranian orbit, and newtons laws of gravity, enabled them to predict where this new planet was at multiple given times, thus being able to predict its orbit. Then, they predicted where it should be at a certain time and looked for it- there it was!

Thus, it was not sheer coincidence and luck that this planet was discovered; rather, their math was what led them to it. Note that the perturbations could be attributed to bodies of different mass at different distances from Uranus -I take it that's the reason for the two astronomers' miscalculation of

Neptune's orbital semi-major axis. NOTE- Please don't downvote it if it's not what you were looking for, I will try to fix that if I haven't.

I suspect that they were lucky that their predictions agreed with reality so closely, but any prediction was going to have Neptune roughly (perhaps very roughly) in the same direction as Uranus, during the times when it affects Uranus the most. So I suspect their calculations meaningfully ruled out large swathes of sky, which improved odds of finding it.

Not the answer you're looking for? Browse other questions tagged orbital-motion history planets solar-system celestial-mechanics or ask your own question.

9
Will Neptune change Pluto's orbit some day?
11
Are Uranus and Neptune too big for their location?
12
What is the irregularity in Uranus' orbit that is caused by Neptune?
11
Was Jupiter's mass "guessed at" by Kepler or Galileo?
12
Planets and Pluto? Neptune?
7
Did Newton conduct any experiments to find something called momentum, or was he such a great genius that he was able to spot it intuitively?
7
Kepler's 3rd law: ratios don't fit data
0
How do I calculate evection and variation for the moon in my simple solar system model?
0
How does the Sun's gravity affect the shape of the orbit of the Moon around the Earth?