Is there an intuitive explanation of the work formula?

Upon learning calculus, I decided it was time to derive all of classical mechanics to give myself a good understanding of physics. What I found was that, while trying to do so, I would need some definitions for the more abstract concepts, such as work and energy. What I found was that the definition of work, W = Fs, has weird implications and does not seem intuitively correct as it is based on two variables that affect each other as the system continues.

Work is the least psychologically pleasing (I chose my words carefully) topic in all of physics for me. It implies that it takes more work to move objects that already have a high velocity than objects with velocity 0, but don't different inertial reference frames contradict this definition? i.e. a baseball moving through space at v=a from the reference of a bystander at v=0 would be moving through a lot more space while being accelerated than from the reference of, say, a train that's going at v=a and sees the baseball at v=0.

I want an answer to that question (on the contradiction of the energy formula with different inertial frames), and I'd also like an intuitive explanation of work.

As you point out, work done is a function of the frame of reference. More specifically, if you apply a force on an object, that force typically connects two different objects, and it's the relative velocity of these two objects that really concerns us.

Example: you are walking in a train, and pull a suitcase behind you. The friction between the suitcase and the ground is 5 N. When you cover the 20 m length of the rail car, you have done 100 J of work.

Now look from the perspective of someone outside the train. If they were trying to apply a force of 5 N on that suitcase while running along next to the train, they might have to cover a significantly greater distance than 20 m in order to move the suitcase. If it took 20 seconds in each case to move the length of the rail car, and the train was moving at 10 m/s (just to keep numbers simple), the person running alongside the train would have covered 220 m, all the while applying a force of 5 N. Total work done 1100 J.

Not sure if that makes it clearer for you - but these are the kinds of things you need to consider as you figure out "how work works".

With regards to intuition, it might help to think about situations of mechanical advantage. 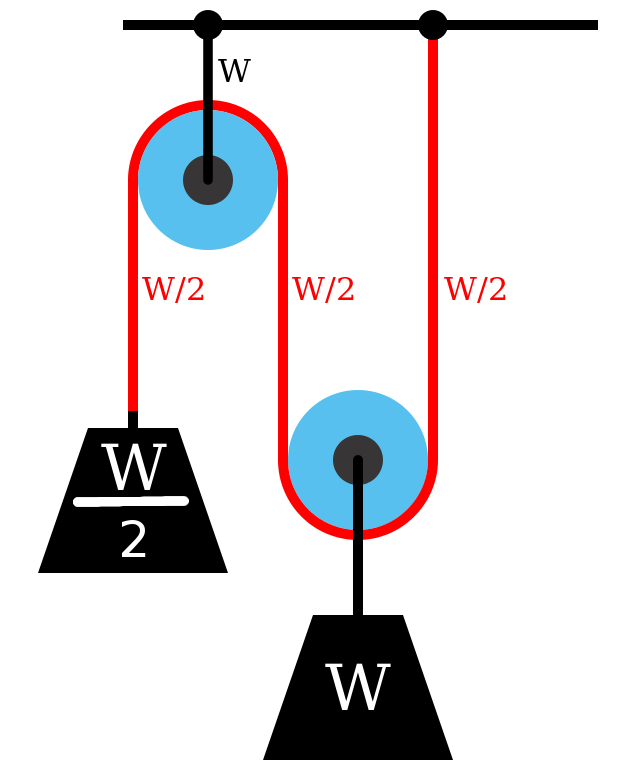 In doing so, we put effectively zero energy into the system. However, work is being done on weight $W$ since it is rising. That energy must come from weight $W/2$. The force of gravity on weight $W/2$ is half as much as on weight $W$, but weight $W/2$ falls twice as far. Thus, the total energy change (work done by gravity) is the same magnitude. This is what allows the pulley to balance, and it shows that the work formula should have force*distance in it.

As others have written there is no contradiction with reference frames or relativity; one simply must keep in mind that kinetic energy is quadratic in velocity. See Ron's answer for a thought experiment about that and the other answers on this page for more intuition and math regarding reference frames.

Work does depend on frame of reference, but so does change in kinetic energy.

Work done and changes in kinetic energy should either both bother you or neither bother you.

To know how much the kinetic energy changes from one location to another you need to know the force (if constant) and how far apart the locations are:

Not the answer you're looking for? Browse other questions tagged classical-mechanics energy kinematics work or ask your own question.

238
Why does kinetic energy increase quadratically, not linearly, with speed?
23
Kinetic energy with respect to different reference frames

1
Conservation of mass energy and kinetic energy in different reference frames
2
Relative kinematics and laws of Newton
0
When moving from one position to another at a constant velocity, how does the conservation of energy hold?
4
Work done changes between reference frames?
1
Is there any other way to describe work done instead of saying the force applied to move an object through a distance?
0
Same energies are transferred to 2 objects. But they gain different amounts of energy. Where is the mistake?
0
Why a Box moving at Constant Velocity isn't doing Work?
0
How is energy conserved in terms of “Work”
2
Is work-energy theorem valid in non-inertial frames?