Are there tides in the atmosphere?

Analogous to the tides of Earths oceans, do the Moon and Sun cause our atmosphere to bulge in what could be described as a low and high tide?

The differential force of gravity on the atmosphere works the same as it does for the rest of the earth (the oceans etc). However, moving the equipotential surface by a few m will be almost undetectable on the atmosphere, since the density of the atmosphere decreases so gradually – over many km. Contrast this with the surface of the ocean, which is crisp.

So while it might be theoretically possible to look for small changes in the height of an isobar of, say, $10^4\,\mathrm{Pa}$, I don't think that it will be possible to measure such a change in practice.

See for example this graph from the Australian weather service showing pressure changes over four days. The units on the left are $\mathrm{hPa}$ – you expect tidal variations to be much smaller. It may take a while (many cycles) to pick out the lunar variations - although I am sure it has been done. 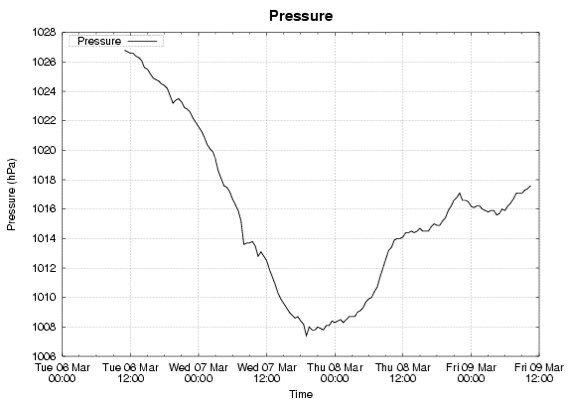 There is a thing called "lunar atmospheric tides" - see Wikipedia which describes the math behind this. And it describes it as "weak".

So the short answer is "yes".

The introduction of that article states:

Atmospheric tides refer to those oscillations in the atmosphere whose periods are integral fractions of a lunar or solar day. The 24-hour Fourier component is referred to as a diurnal tide, the 12-hour component as a semidiurmal tide. The total tidal variation is referrred to as the daily variation. Although atmospheric tides are, in small measure, gravitationally forced, they are primarily forced by daily variations in solar insolation.

So – the main cause of daily variation is solar heating. There is a (much) smaller component due to gravity:

Analogous to the tides of Earths oceans, do the Moon and Sun cause our atmosphere to bulge in what could be described as a low and high tide?

The answer is yes, if you generalize beyond gravitation. Sunlight heats the atmosphere, and this causes atmospheric tides. The two dominant effects are absorption of visible and near infrared sunlight by water vapor in the troposphere and absorption of ultraviolet by ozone in the stratosphere.

The article by Lindzen cited in Floris' answer says exactly that. Atmospheric tides are caused primarily by solar heating rather than by gravitation. They are still "tides", however.

This isn't really an answer, and I will take it down shortly, just want to put it here as a demonstration of the clear dominance of the 12-hour constituent in the atmospheric tides in the tropics (can't put images in comments). The pressure record comes from last year in the Eastern tropical Pacific. There's a fair amount of variability on weekly timescales, and the 12-hour oscillation stands out, but you can't really make out a 24-hour component at all.

So even though the tides are driven by solar heating, which certainly sounds like it would mean they'd follow a daily cycle, they actually have a half-day cycle. 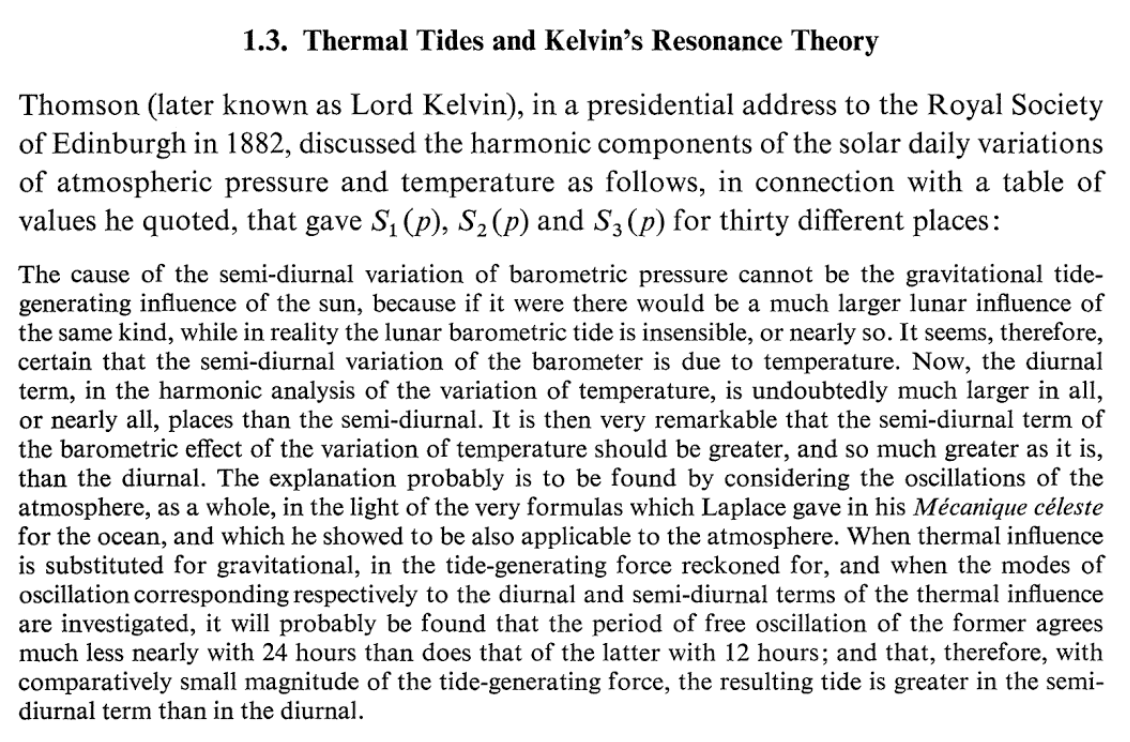 Not the answer you're looking for? Browse other questions tagged newtonian-gravity atmospheric-science geophysics tidal-effect or ask your own question.

228
Does Earth really have two high-tide bulges on opposite sides?
16
Does the moon affect the Earth's climate?
13
Leading-order cause of diurnal (not semidiurnal) variations in $g$?
2
Atmospheric Tides effect on atmospheric pressure

4
How gravitation affects tides
3
Where does energy for high and low tides come from?
60
Why is the Moon considered the major cause of tides, even though it is weaker than the Sun?
0
By which factors are tides and waves affected?
4
Height of tidal bulge: reference needed
0
The role of the Sun in spring and neap tides
31
Does bottle water rise a little bit on full moon days?
0
NASA's explanation on tidal acceleration