I'm currently planning an experiment (high school biology) where I will drill a hole into a bone, then load weights onto it until it breaks. I will be repeating this with holes of different diameters.

So my question is- what is the name of the property I'm measuring? I thought this might be the 'fracture toughness', or 'lateral shear' as a physicist suggested, but this is similar to how a three-point flexural test works, so it could be 'flexural strength' too? 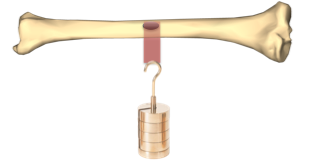 Your test will not be measuring a single property of the test specimens, so it won't have a specific name.

But we can try and draw some inferences about what you'll be measuring with these experiments, using the idealised schematic above. In it the bone has been replaced with a uniform bar, with a hole drilled through it at the halfway point. The bar is suspended on two frictionless supports.

The force $F_b$ at which the bone breaks is likely to be correlated with the so called stress at break of the bone, $\sigma_b$. We can expect:

Increasing the diameter $D$ of the drilled hole reduces the area of the zone under tension, so that for comparable values of $F$, the stress at break of the bone will be reached earlier. We can expect:

Combined, we can expect:

Not the answer you're looking for? Browse other questions tagged material-science stress-strain or ask your own question.

77
Will a hole cut into a metal disk expand or shrink when the disc is heated?
3
Decomposition of deformation into bend, stretch and twist?
3
Why does glass break at the line where you score it?
70
Why does dry spaghetti break into three pieces as opposed to only two?
2
How much weight would I need to put on the end of a tube to break it?
2
Are hardness, strength and toughness of materials not the same thing in a way?
1
What's the difference between critical load and yield stress?
0
Does the impact location of small stones on car windshields significantly affect the likelihood and extent of a break?