Why is it effectively impossible to balance this rectangle block on a triangle block? (See photo)

I've always wondered why it's basically impossible to balance a rectangle block on top of a triangle one like this. This is my nine-year-old giving it a try.

I have never in my life gotten it to giving even a hint of balancing, not even for a fraction of a second.

Why is this so difficult? 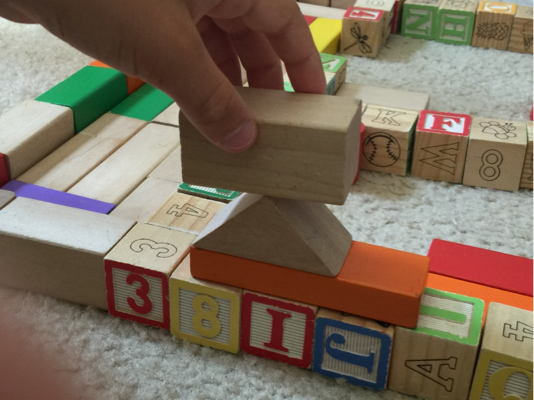 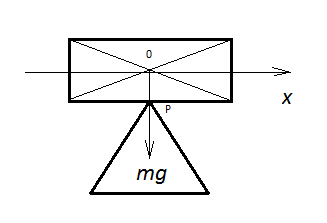 This block is perfectly balanced because the weight force vector $mg$ runs precisely through the top point $P$ of the triangle. The triangle provides an equal and upward reaction force $-mg$ and there are no net forces or momenta acting on the rectangular block: it is perfectly stationary.

But that is so easily changed. Suppose we move the bloc along the $x$-axis to the right, by a tiny amount that I'll call $\Delta x$. Now the weight vector $mg$ no longer passes through the point $P$. The product $mg\Delta x$ now provides a small moment ('torque', if you prefer) which causes the rectangle to start rotating clockwise around the point $P$ and eventually the bloc falls off the triangle.

Note that exactly the same would happen if we had moved the bloc a little to the left ($-\Delta x$). The bloc would then have started rotating counter-clockwise around $P$.

So getting the position of the centre of gravity right with respect to $P$ is crucial here for precise balancing.

Edit (on request of the OP) - some factors that affect ease of balancing: 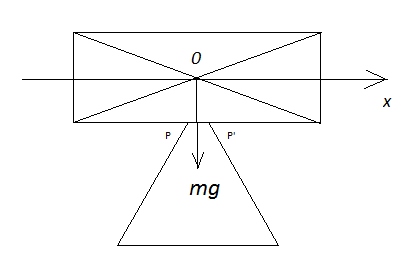 In the schematic above the previously sharply defined pivot point P has been (exaggeratedly) replaced by two points P and P’. On this ‘blunt’ triangular bloc’s top edge there’s now a narrow flat ridge of width PP’. As long as the rectangular bloc’s weight vector $mg$ passes through the interval PP’ there is no moment that can cause the rectangular bloc to start moving. The bloc has now a little freedom in the $x$ direction. So it’s easier to balance on a blunt pivot than on a sharp one.

As a consequence it’s also easier to balance on a softer pivot than a harder one: the softer one will 'sag' slightly under the weight of the rectangular bloc, causing a geometry that’s similar to the case of the blunter pivot point. For example, high precision balancing scales use very hard and very sharp anvils for maximum precision.

For the rectangular block we can define the aspect ratio $AR$ as:

$AR=\frac{W}{D}$ with $W$ the widest horizontal dimension and $D$ the largest vertical dimension. For the rectangular bloc used in the schematics, clearly $AR > 1$.

In general, the larger the AR of the object, the easier it is to balance it.

Not the answer you're looking for? Browse other questions tagged newtonian-mechanics forces statics free-body-diagram equilibrium or ask your own question.

1
Why is the force of Friction less than the force applied on the block in this situation?
3
Why are triangles drawn like so when working with gravity on an inclined plane?