How fast do electrons travel in an atomic orbital?

I am wondering how fast electrons travel inside of atomic electron orbitals. Surely there is a range of speeds? Is there a minimum speed? I am not asking about electron movement through a conductor.

The state of an electron (or electrons) in the atoms isn't an eigenstate of the velocity (or speed) operator, so the speed isn't sharply determined. However, it's very interesting to make an order-of-magnitude estimate of the speed of electrons in the Hydrogen atom (and it's similar for other atoms).

The speed $v$ satisfies $$ \frac{mv^2}2\sim \frac{e^2}{4\pi\epsilon_0 r}, \qquad mv\sim \frac{\hbar}{r} $$ The first condition is a virial theorem – the kinetic and potential energies are comparable - while the second is the uncertainty principle. The second one tells you $r\sim \hbar / mv$ which can be substituted to the first one (elimination of $r$) to get (let's ignore $1/2$) $$ mv^2 \sim \frac{e^2 \cdot mv}{4\pi\epsilon_0\hbar},\qquad v \sim \frac{e^2}{4\pi\epsilon_0\hbar c} c = \alpha c $$ so $v/c$, the speed in the units of the speed of light, is equal to the fine-structure constant $\alpha$, approximately $1/137.036$. The smallness of this speed is why the non-relativistic approximation to the Hydrogen atom is so good (although a non relativistic kinetic energy was assumed from the start): the relativistic corrections are suppressed by higher powers of the fine-structure constant!

One could discuss how the speed of inner-shell electrons and valence electrons is scaling with $Z$ etc. But the speed $v\sim \alpha c$ would still be the key factor in the formula for the speed.

This is the realm of quantum mechanics and classical notions about point like electrons travelling at certain speeds don't really apply in this domain. So there isn't an average speed or a minimum speed or even a maximum speed (except for the speed of light which is the maximum speed for any particle with mass).

The closest you can come to having any concept of speed for an electron in an orbital would be to apply the Heisenberg uncertainty relation which states that $$\Delta x \Delta p \geqslant \hbar$$ So if you plug the size of the orbital in for $\Delta x $ and solve for $ \Delta p $ you would have an estimate for the uncertainty in the momentum which you could then relate to the uncertainty in speed.

I think it may be helpful to fill out the answer to this question by summarizing what happens for inner electrons.

Now let's consider neutral atoms. The above calculation gives a rough order-of-magnitude estimate if we replace $Z$ by $Z-\sigma_n$ where $\sigma_n$ is a screening factor which accounts for the fact that an electron in shell $n$ (i.e. having principal quantum number $n$) does not, on average, experience the whole electric field of the nucleus, but a reduced electric field owing to the presence of the negative charge of the other electrons. For the outermost shell this $\sigma_n$ will be about $Z-g/2$ where $g$ is the number of electrons in the outermost shell (equal to the group number in many cases). The idea is that all the electrons in lower shells shield the nuclear charge, and each of those in the final shell shield it about half the time for the other electrons in the same shell. All this is just a rough statement which ignores the effects of the shape of the orbitals. It leads to an order-of-magnitude estimate of the r.m.s. speed of the outermost electrons: $$ v_{\rm outer} \approx \frac{g \alpha c}{2} $$ Note, we have ignored the fact that the wavefunction itself is different for $n > 1$ compared to $n=1$, so there will be further factors relating to $n$.

One thus finds that for uranium ($Z = 92$) the speeds for the inner-most shell are of the order of the speed of light. This makes this atom a useful test-bed for relativistic quantum theory. More widely, from caesium $(Z = 55)$ on up the inner electrons have speeds of the order of half the speed of light, and from francium $(Z=87)$ about half the electrons have speeds above a third of $c$.

Altogether, then, fast electrons are a significant feature of the atomic physics of heavy elements. (And for precision calculations one must allow for relativistic effects in every case, not just the high $Z$ atoms).

This sounds absurdly simple, but for order of magnitude results, it matches well with online results and other results here. People tend to think that good old Newtonian dynamics are useless on the atomic scale, but they still apply if the velocity is well below light speed.

Simply take the electric force between the electron and nucleus, convert it to an acceleration by a = F/m, and then balance that acceleration with centripetal acceleration of velocity squared over r. That is, v = SQRT(rF/m).

I know, you might say that doesn't work, an electron is not like a satellite at a point location, but is rather smeared out in an electron cloud about an orbital. But remember - the definition of the orbital is a path at which each point is a balance between kinetic and potential energies. So each location on a spherical orbital has to be a point of balance between centripetal acceleration and electrostatic attraction. 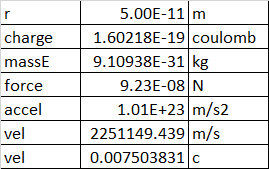 4
A neutrino has rest-mass and travels at (near) $c$, why isn't its mass/ energy (nearly) infinite?
3
Higher order corrections to hydrogen and their consquence
2
How fast do molecules move in objects?
3
What is the height of the electron orbits of an atom?
1
Is it possible to travel at the speed of light?
1
Finding the velocity of a bounded quark of a meson
-1
What are the distributions of electron speeds in a star and in a planet?
0
Can the Lorentz force stabilize the Hydrogen atom?
0
Speed of Electron in matter:
0
Why the things small seemed to move faster?
See more linked questions

19
How do electrons jump orbitals?
2
How is the energy of an electron-shell related to the speed of electrons in that shell?
12
How do electrons actually move in a circuit?
1
Is there experimental evidence for the model of discrete intervals and orbital distances for electrons around the atomic nucleus?
4
What does it mean to talk about electron's "orbital speed", quantum mechanically?
42
Do electrons really perform instantaneous quantum leaps?
0
How do delocalized electrons conduct electricity?
2
Incredible electron drift velocity in atomic thin layer of graphene?