What type of neutrinos do we detect

There are three types of neutrinos known today. When detecting them, how can we tell which type we are detecting? 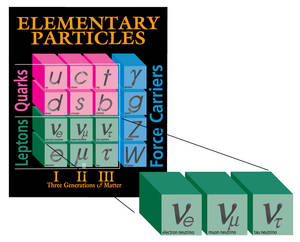 Neutrino flavor is defined as agreeing with the flavor of the charged lepton participating in the interaction, so that the neutrino in the reaction $$ \nu + A \to \mu + X \,, $$ is defined to be a muon neutrino and the one in $$ \nu + n \to e + p $$ is a electron neutrino by definition.

We have no way of knowing the alleged flavor of a neutrino participating in a neutral current interaction.

As a matter of experimental fact electron and moun neutrinos (and anti-neutrinos) are easy, but tau neutrinos are much harder because demonstrating that you have a tau-lepton is hard, but both OPERA and IceCube can do that (to chose currently running experiments).

Not the answer you're looking for? Browse other questions tagged standard-model neutrinos .

1
How is each neutrino associated with a specific charged lepton?
-1
What we observe in neutrino experiments?

50
How do we know Dark Matter isn't simply Neutrinos?
11
Do solar neutrinos actually oscillate between electron, mu and tau?
1
In typical decay experiments what range of energies do electron neutrinos and muon neutrinos exhibit?
5
Could a 4th generation neutrino be a viable candidate for dark matter?
14
If the mass of neutrino is not zero, why we cannot find right-handed neutrinos and left-handed anti-neutrinos?
3
A terminology question: What are active neutrinos and why?
0
How to discern between the accelerator and atmospheric neutrinos in detectors?
1
Why is a fourth type of active neutrinos not allowed by the invisible width of the $Z$-boson?