Why does electron-positron annihilation prefer to emit photons?

If gravitons are also massless, and neutrinos nearly so, why aren't pairs of either of them normally expected outcomes of electron-positron annihilations? Are they possible but simply unlikely, or is there actually some conserved quantity prohibiting their creation?

Edit: I'm talking about the low-energy limit, not in accelerator beam collisions.

It's possible, just very unlikely. You can get a clue of the relevant probabilities by looking at the Feynman diagrams for different kinds of $e^+e^-$ annihilation. Here's $e^+e^-\to\gamma\gamma$: 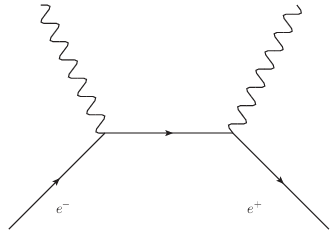 For neutrino production, on the other hand, the simplest Feynman diagram is this: 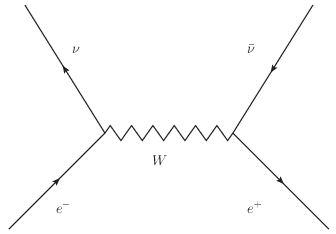 The probability of this is proportional to two factors of the weak coupling, $g_\text{weak}$, and $\alpha_\text{weak} = \frac{g_\text{weak}^2}{4\pi} \approx 10^{-6}$ (source). So this process is on the order of 10000 times less likely than the annihilation into photons. (In fact, it's actually even less likely than that, because at low energies, as akhmeteli pointed out, the probability is further suppressed by a factor of $m_W^{-2}$, where $m_W$ is the relatively large mass of the W boson.)

Gravity is an even weaker force, so we would expect the corresponding diagram for annihilation into gravitons to be much less probable. You can estimate that $\alpha_\text{gravity} \approx 10^{-39}$. But in this case, it's not even clear how well Feynman diagrams describe the process at all, since we don't have a proper quantum theory of gravity.

It is my understanding that electron-positron annihilation with neutrino-antineutrino production is possible at any energy, but the cross-section of such reaction is extremely low at low energy. While electron-positron annihilation with two photon production requires a virtual electron, electron-positron annihilation with neutrino-antineutrino is only possible due to weak force, so it requires a virtual W or Z boson (Phys. Rev. D, D.A. Dicus, v.6, p.941 (1972)). The masses of these bosons are five orders of magnitude greater than that of electron, so the cross-section is extremely small at low energies. Or, in other words, the reaction is possible, but very rear, as weak force is much weaker than electromagnetic force at low energy.

All sorts of particles might be created with various probabilities depending on the energy of the collision. Charge, momentum, energy, and angular momentum should be conserved so typically you see results like particle-antiparticle pairs. At higher energies there are many products that are less likely but not impossible: $D^+D^-$,$\nu\ \bar{\nu}$,$W^+W^-$,even the $Z^0$. CERN built an entire accelerator, the LEP, devoted to this interaction.

Not the answer you're looking for? Browse other questions tagged particle-physics photons antimatter or ask your own question.