Density of the Sun

The image below represents the Sun's density gradient, which shows how the density changes with the radius. The ground we stand on should have a density between 2 to 3 $g/cm^{3}$. That should put you just above the water point on the vertical axis. The corresponding radius is then about 0.45 of the solar radius.

Note that the vertical axis is in a logarithmic scale.

More links to this data and its source in this answer. 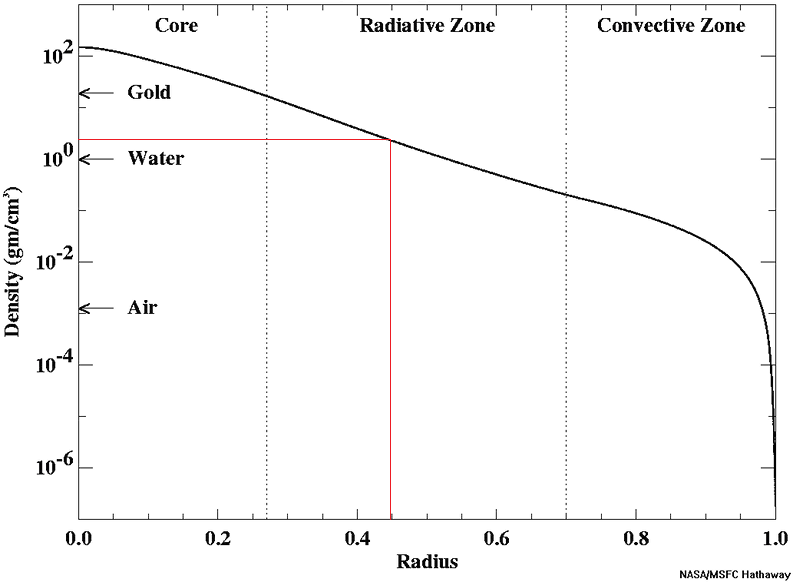 As @KyleKanos point out, "the answer is a google search away", but it's not quite as simple as he suggests. The mean density doesn't answer your question (the mean density turns out to be about 1.4 times the density of water by the way).

Not the answer you're looking for? Browse other questions tagged astrophysics sun stars density stellar-physics or ask your own question.

1
Electron density in the Sun
-2
If we could withstand the temperature of Sun then could we actually stand on it? Does it have a solid surface or not?

2
Is there anything special about the Sun's photosphere in terms of density?
3
Sun energy production as a function of depth
14
Are the electrons at the centre of the Sun degenerate or not?
0
Where is the Hydrogen the Sun consumes?
6
Very old photons from the Sun
1
Can density replace buoyancy?
0
Does the Sun have enough gravitation to bind its hydrogen/helium plasma?