It is hard to push the empty upside down mug inside the water as it has air present inside its cavity which prevents the water from entering inside the mug.But when we tilt that mug which is still completely immersed in the water by some angle then water enters inside it accompanying the formation of bubbles.....even thogh buoyant force acting would be the same in all orientations it happens.......why is it so..

This is how I imagine the situation: 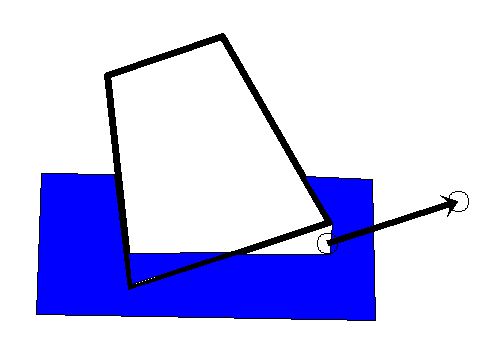 The water level tries to be horizontal, even beneath the tilted mug. That means that in the "lower half" of the mug, the water penetrates inside the mug. The pressure and density of the air stays nearly constant, so air must penetrate outside the mug on the other side. Now, it is geometrically possible for the air to escape in the direction of the arrow and create bubbles.

It's actually encouraged to do so, I think, because the pressure of the air is slightly higher than the pressure of water at the beginning of the arrow. Why? Because the pressure is nearly uniform in the whole confined air – the hydrostatic altitude-dependence in the air is negligible due to the air's low density – and it is equal to the pressure of water at the horizontal level beneath the mug. At the beginning of the arrow, the hydrostatic pressure is lower, so the air has the inclination to move to the right in the direction of the water, and it eventually gets outside the "vertically beneath the mug" space and it may escape.

I hope that I don't have to explain why bubbles of the air move "up" in water whenever they can. ;-)

The critical angle at which the bubbles start to from is determined by the surface tension: the bubbles don't want to be too small because of this additional force and a small initial excess of the pressure may fail to be enough to form such bubbles. Approximately when it becomes possible for the minimal sustainable bubbles to form and escape, they will.

A naval engineer would ask you to examine the relationship between the center of buoyancy and the point where you are applying force and suggest you consider the stability (or lack there of) of the arrangement.

If you have access to a vessel with a rigid handle you could try the experiment again while pulling down.

It is hard to push the empty upside down mug inside the water as it has air present inside its cavity which prevents the water from entering inside the mug.But when we tilt that mug which is still completely immersed in the water by some angle then water enters inside it accompanying the formation of bubbles even thogh buoyant force acting would be the same in all orientations

6
What is the basic reason behind buoyancy?
10
How do simple bird waterers work?
1
How to calculate the pressure inside hose subjected to weight? (Example)
0
Fluid Statics-hollow cylinder problem
0
Why isn't the apparent weight of a body in a fluid equal to the buoyant force? Why does buoyancy reduce it instead?
1
Why is it so difficult to pull an immersed mug out of the water?
1
What would the water pressure be at this point in a static incompressible fluid?
3
How do bubbles rise in water?
33
Why should water fall down from an upside down glass of water?