Consider, I want to make very strong magnetic field in some spot in space ( focus ) but I cannot put any solid material ( like metal conductor, or superconductor ) close to that spot (e.g. because there is very high temperature or radiation, like in some thermonuclear reactor ).

So my idea is that maybe Ion beam can be used instead of solid conductor.

The problem is that a ion beam which would simply bend into a circle by homogeneous magnetic field will decrease (rather than increase ) the field inside the loop enclosed by the beam. ( This follows my previous question. ).

So I come up with configuration where a cusp of high magnetic filed is created in between several ion beam loops almost touching each other from outside. It looks like this: 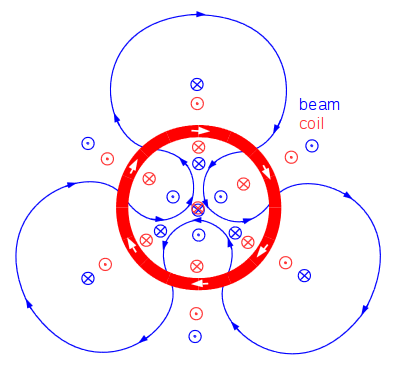 EDIT: Figure description - blue curve is a trajectory of particles ( shape of ion beam deformed by magnetic field ); red circle is electromagnetic coil (e.g. copper or superconductor ); arrows is direction of current; circle-with-cross (X) mark is magnetic field going behind screen plane, circle with dot (.) is magnetic field going in front of plane. Red marks show field created by coil, blue shows field created by beam. Arrows shows direction of current (i.e. positive charge by convention). ( NOTE: clearly the ion beam would need some re-focusation and re-acceleration ... which can be done e.g. in the outside ears of its trajectory - this is not drawn )

Everywhere a two beams with opposite orientation came close they repel each other. In principle I use here inertia of the particles to overcome this repulsion. Therefore, Ion beam is better suited than electron beam for this purpose ( I guess ).

A weak point of this picture probably is that it considers just situation in 2D. In 3D it would be probably very unstable.

In principle it's a nice idea but there are some major flaws.

First of all, even in 2D, your scheme is a super-unstable configuration (tiny fluctuation would destroy it) and the use of the beam repulsion (space charge) in the inner region just does not work. If it would be strong enough to bend the beams, they would be themselves destroyed expelling plenty of particles.

So let's just consider a simpler configuration: we shoot three high energy (rigid) beams on the side of an equilateral triangle and we look at the field in the center.

That's the same order of magnitude of the Earth magnetic field. I let you draw your conclusions ;)

The point is that in superconducting magnets we push currents in the order or tens of kiloamps, and there is no way to have such strong beam currents.

I don’t think your going to make this work in 2D. If you ionise a magnetic material, then rotate protons inside of that field, you should get a magnetic charge based on speed of rotation and density of your ion field and proton count. Your field would need to be a half sphere and you would then need a rotating modulation on that field. They are making super strong magents using ion lasers rotating on fusion to increase proton spin.

Not the answer you're looking for? Browse other questions tagged electromagnetism plasma-physics accelerator-physics or ask your own question.

3
Electron beam in magnetic field - increase or decrease the field?