What is the total velocity/force on a particle in fluid?

I am now facing a fluid-particle interaction problem. I would like to simulate particle motion in a fluid.

I do know the external force acting on a particle (dielectrophoretic force in this case) and gravity and buoyancy forces. The assumption is the particle reaches its terminal velocity in zero time.

The thing I am not really sure about is the drag force. My particle is surrounded by fluid of certain viscosity and density. The problem is the "velocity field", if I can describe it in this way, is not isotropic - the fluid velocity might have (and has) different magnitude as well as orientation on different sides of the particle. (My problem is 2D only.)

The question I am asking is how can I add the velocities around the particle to get the total drag force affecting the particle in a physically correct way?

edit 1: Clarification. I only have one particle in the fluid and the fluid itself is already moving which causes the particle to move according to the drag force affecting it. I am aware of Brownian motion, but I have neglected it for now. The particle is significantly larger than water molecules, so I take water as a bulk and the particle as some sort of object which is moving through the bulk.

edit 2: Picture. I have made a simple drawing of my problem. The particle is significantly larger than the water molecules. The flow in the fluid is anisotropic. My question is how can I determine the final velocity = the final drag force. In another words where exactly would my particle move in next "time step"? 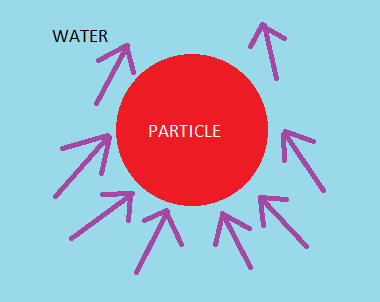 What you're describing is Brownian motion. If there is a force only on the particle, then you should simulate Brownian motion with an additional vector in the direction of the particle force. Obviously the intensity will determine how quickly a particle will move through the fluid.

Rather if the velocity is being applied to all particles, then all particles will have this additional vector for all collisions, which is likely going to get you something similar to a stream flow on a larger scale.

In either case, you should be able to simulate this movement fairly accurately by providing random direction vectors to your particle in combination with a single constant drag vector.

I hope that's clear, but let me know if you need clarifications.

Edit: If all particles have a general drag vector added, then this means every hit with your particle is going to accumulate this force, so the end effect is that the particle is going to go towards the drag vector. Imagine throwing a ball with the wind blowing. Even if you throw it against the wind, the ball tends to want to go with it.

If the particle is large with respect to the others, this only means that it will have more frequent collisions. If it is large, then presumably it is also heavier, and so the random forces would be both more frequent and less intense.

Edit 2: If the particle is significantly larger than the water particles, then you should completely exclude Brownian motion. If you think about it, the particle when moving with the water is having a constant vector applied to it by the water. A particle would have a force applied inversely proportional to the difference between the fluid drag force and the current force being applied on the particle.

where the fluid stress tensor $\bar{\bar{\sigma}}$ is a constitutive function of $\nabla \vec{v}$ and other relevant variables in your problem (viscosity $\mu$, temperature $T$, etc.)

For a Newtonian fluid, the standard constitutive relationship applies, but if you're working with something a little bit more exotic like blood (which I'm betting could be the case since you're doing DEP), that relationship is different and your drag will be different than what you may expect from, say, Stokes's law.

In short, find what the flow field of your fluid is (with the particle in it), calculate the stress field using the appropriate constitutive relation for your fluid, and then calculate the integral above to obtain the drag force. You can do a sanity check by making sure your result is in the same ballpark as Stokes's law, which it should be barring the situation where you are working with a truly pathological fluid.

Not the answer you're looking for? Browse other questions tagged fluid-dynamics particle-physics or ask your own question.

2
Oscillations of a fluid particle in a stably stratified fluid
0
What forces act on an object submerged in flowing fluid in an enclosed environment (i.e pipe)?
2
Is drag force in the direction of particle motion or opposite to motion?
0
motion of a fluid in a moving truck
6
Does a fluid with zero viscosity cause a body moving through it to decrease it's velocity?
1
Does Stoke's drag formula apply even in the absence of flow?
0
How does flow rate affect the terminal velocity of a bubble rising?
1
Questions about the force exerted by a fluid on the pipe in which it is flowing