Why Kink can not tunnel to vacuum, and is topologically stable?

But the book states:

Due to the infinite high energy barrier, the kink can not tunnel into the vacuum.

Where is the infinite high energy barrier?

Here we assume that OP's question asks about $\phi^4$-theory in 1+1D, where the lagrangian density reads 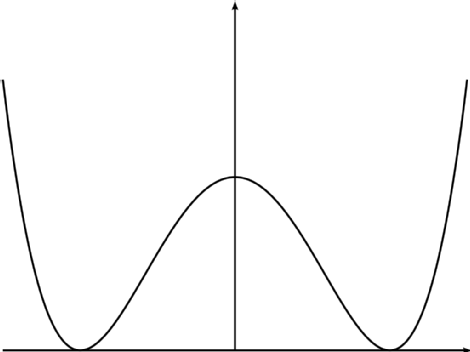 We rephrase OP's question as follows:

Prove that there don't exist finite energy homotopies $\phi:\mathbb{R}^2\to \mathbb{R}$ between the following 4 topological sectors: the kink, the antikink, and the two vacuum solutions $\phi=\pm v$.

Sketched indirect proof: Assume that a homotopy $\phi$ exists. To be concrete, say, between the kink and the left vacuum solution $\phi=-v$. So the homotopy $\phi$ has to change valley for positive $x$. Since this is Phys.SE rather than Math.SE, we are for simplicity going to assume that for arbitrary instants $t\in\mathbb{R}$, the limits

exist. Then to have finite potential energy

Not the answer you're looking for? Browse other questions tagged quantum-field-theory lagrangian-formalism field-theory solitons or ask your own question.

3
Spontaneous symmetry breaking in a scalar field
2
Boundary condition for solitons in 1+1 dimensions to have finite energy
4
What is the intuition for topological currents?
3
How many connected components are there in the vacuum manifold of $\phi^4$ theory?
0
Doesn't the “Mexican hat” potential give a misleading impression that the barrier height between two vacua is finite?
0
Periodic traveling waves of the form $\phi(x,t)=\psi_c(x-ct)$ for a $\phi^4$ model
3
Stability and topological charge of kink (anti-kink) solutions (soliton)
5
How to Diagonalize Self-Interacting Scalar Hamiltonian for Mass Term from Polyakov Paper?