Special Relativity - two beams of light in opposite direction

I just want to first say that I'm aware I am asking a question due to my own confusion and ignorance and not because of anything to do with special relativity. I hope that's alright.

What I'm confused about is whether two beams of light moving in opposite directions away from eachother, have a relative speed of $c$, or $2c$.

The thing is, we can always say it's $c$, but then when we look at the relative distance travelled for the time elapsed, the result is $2c$.

Can anyone explain what is going on?

Response to Alfred Centauri 22/08/2016 I question your reasoning for two reasons. Firstly to photons moving in opposite directions was one of Einstein's examples of the counter-intuitive implications. So what you're saying wasn't around then, and Einstein himself was misconceived. In fact you can find instances opposite direction light beam as recently as 10 years ago. Phillip Green in his popular science book uses that very example in his introduction. So the question is whether this is a formal adjustment to SR, backed by a publication and a reasonable consensus. Is it?

The second reason is to do with your reasoning. You say it is not a legitimate measurement because there is no inertial frame in which one or the other photon is at rest. That at-rest criteria as you define the constraints, is equally applicable to two beams coming toward eachother. In fact almost every problem setup has no way to assume that one of the two frames is stationary. The way it's handled, I believe, is mathematically by the simple addition of the equal and opposite motion. This is also implicit in the Laplace transforms, I think.

The reason this can be done, I think, is because all inertial frames are assumed to be equilvant....they are part of a global reference frame.

A further matter derives from the fact the relative motion of two frames can be represented as tangential and radial components. If what you are saying is correct, then one of the two components cannot be measured in almost all cases.

I definitely want to make clear I am a novice in the theory, and you probably are not. It's possible this is all misconception, except for the historic part of my response which can easily be confirmed. Please do let me know if you can as I am trying to learn and need my mistakes corrected, especially the long running ones.

What I'm confused about is whether two beams of light moving in opposite directions away from each other, have a relative speed of C, or 2C.

The thing is, we can always say it's C

In fact, we can't say that at all.

The two beams of light (or better, two oppositely directed photons) do not have a relative speed at all for the simple fact that there is no inertial coordinate system in which either photon is at rest.

Yes, according to the relativistic velocity addition formula, one might think that the relative velocity is $c$.

In any observers frame, a lightray propagates with $c$. Thus for any observer the distance between two light pulses which propagate from one point in opposite directions grows as $2c \cdot t$. There is no reason to believe that the relative distance grows as $c \cdot t$. One could mistakenly arrive at this answer if one thinks one could go into a photons restframe, which is not possible.

That the "relative velocity" is larger than $c$ is not a problem as you cannot use this setup to send information faster than light. The appearance of "velocities" higher than $c$ happens easily. Assume you send a continuous ray of light at a certain angle to the sky. If you now change the angle with an angular velocity $\dot \theta$ the spot will move with $v=\dot \theta\cdot d$ at a distance d (say we have a planet with a solid surface at that distance). If the distance if very large, this can easily become larger than $c$.

Let's attack the confusion from the other side.

People say that nothing can go faster than $c$

So we can actually conclude that inertial frames can't move at speed $c$ relative to an inertial frame and so therefore neither can observers.

Your result demonstrates that not only is light speed a maximum speed for anything, it is a speed that observers can not achieve, they must always go less than $c.$

I know I'm late to the party and I'll probably just confusing things further but it seemed to me that the other answers glossed over some important points.

The difficulty for the specific case given is that, from the perspective of the photon or some impossible hypothetical ship traveling along with it, time has stopped and lengths are infinitely contracted in the direction of travel. The concept of distance and relative velocity between the two photons is often written off as completely nonsensical but the other interpretation is that there is no distance or time separating them. Not from their perspective, anyway.

Massive particles moving away from a common origin at greater than 0.5c but less than c would sidestep that particular singularity. Length contraction and time dilation still account for why the apparent relative velocity never exceeds c from their perspectives.

It's worth remembering that in GR, it is space itself that's contracting along the path. It's not just that the particle or ship moving at relativistic speeds is being flattened relative to some hypothetical static euclidean space.

People tend to shy away from thinking about this problem but it has real world consequences in quantum entanglement. It's directly applicable with entangled photons but with massive entangled particles moving away from each other slower than c, you have to remember they are coupled by bosons moving at c. That means there's still an infinitely contracted path between them even though that's not the path the two massive particles have taken. Einstein may not have liked "spooky action at a distance" but it's been periodically pointed out in various published papers over the last century that it should actually be expected in GR.

We have the pi0. The pi0 can be at rest and when it decays it goes into two gamma, conserving energy and momentum. In the laboratory frame , here is a pi0, a laboratory case for your question: 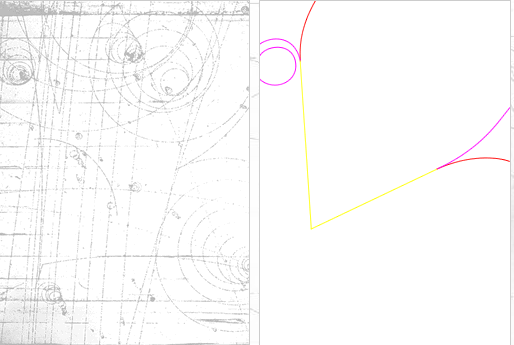 This comes from a famous event, the omega- event which was predicted before discovery.

From this I conclude that at the photon level , only if you find the center of mass of the four vector which is the sum of the two photon four vectors, a stable point in space (versus which the velocity of each photon can be deterimined) exists. Photons cannot be checked against each other because they do not have a center of mass frame.

Light is built up by zillions of photons so the argument should mathematically hold for electromagnetic waves in general as Lorentz transformations are rigorous.

The watertight way to describe things in special relativity is to describe your system, ask a question, and figure out whether that question has a physical answer or not.

You can describe the time/position of one light ray with a line $(t, ct)$. The first number is measured in seconds and is the time, and the second coordinate is measured in meters and is the position, say to your left or right. $c$ here is the speed of light.

At the same time, a light ray is moving in the opposite direction. Its position can be described as $(t,-ct)$.

Asking a question of the system

In your case, it's true that the separation between the two rays of light, at time $t$, is equal to $ct-(-ct)=2ct$. The distance between them increases at a rate of $2c$.

Figuring out whether that is a physical statement or not

You could make a mistake and say, "that means that in some reference frame, I will see light moving away from me at twice the speed of light." That's incorrect! In classical mechanics, and in regular Newtonian every-day life, the question of "what is the relative speed of these two objects" and "can I go into that reference frame and actually observe that relative speed" are equivalent. In special relativity, they are not!

You'll always see both rays of light moving away from you at the speed of light -- no more, no less.

And if planet earth were to move toward light that has not yet reached us from a distant star, the light and the earth would be heading toward each other at a speed greater than C. But that is merely a relative speed: a relative speed is not a speed of a thing.

One could always conjure up a velocity that's much higher than even 2c! So, right now, I have two envelopes in front of me. Say that on the white envelope, a particle is moving relative to it left at c, or -c. On the yellow envelope, we have +c. So, the velocity of particle(yellow) relative to particle(white) is c-(-c), which is 2c.

So, even if we say (theoretically) these envelopes can move apart from objective space at speed c, what if these envelopes were moving away from each other, like before, at v = c--c = 2c? Then, of course, you might think our limit is

Let's add a third dimension, where the envelopes are moving from each other horizontally, simultaneously. So, the magnitude of v would be, using the same rules as before,

Well, there's no reason to stop. sqrt(x) goes to infinity, and multiplying c to sqrt(x) doesn't stop anything - rather, it simply increases the speed the vector trends towards infinity as we keep adding dimensions in quadrature!

I think that the relevance of c is that you can move faster than c from a coordinate system, but not THE coordinate system. At the end of the day, I think we're calculating the magnitudes of vectors that have absolutely nothing to do with c. It's about as meaningful as saying, the length of your genitalia is measured from tip to crotch. What if we add the distance from crotch to tip to tip to crotch?

Not the answer you're looking for? Browse other questions tagged special-relativity speed-of-light velocity inertial-frames observers or ask your own question.

-2
Will relative velocity of light exceed $c$?
1
If the speed of light is a limit, is there a way to tell which direction we are moving through space and how fast?