Why does this treatment of the Michelson-Morley experiment assume the speed of light is constant? 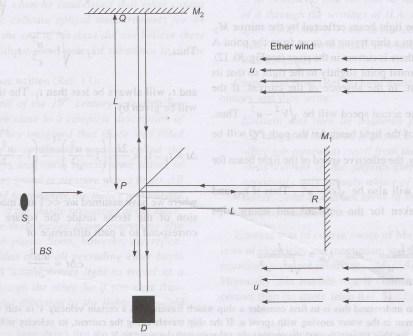 Although Chris' answer contains all you need to know to answer your question, I thought I add a few lines to make things more clear.

The time difference you quote could be derived by taking into account the "velocity of light with respect to the moving apparatus" and expressing the result in terms of the rest velocity $c$. Because it is easier, however, one calculates the time difference in the rest frame of the aether (where light indeed would have a constant velocity $c$) and assumes that the apparatus moves through it with velocity $-u$. This results in "effective lengths" that the light has to cover in the aether frame -- see Chris' post for the math.

Hence the $c$ in the formula should be thought of as the velocity of light in the aether frame.

The point is that it's a test of the spatial consistency (jargon word: "isotropy") of the speed of light. If light takes a different time to go down the two paths then there should be some phase difference between the light rays when they hit the half-silvered mirror; you tune the lengths of the "arms" for some test light (sodium) so that this phas difference starts at 0, then you rotate the apparatus to see if the phase shift changes, as it must if the relative speeds of light are different along the different arms. The effect appears as a "fringe shift" at the eyepiece, which measures an "interference fringe" between the two paths.

So there are two calculations to do: one if the speed of light is constant, which sets up constructive interference and a plain fringe, and one if the speed of light is not constant, which sets up a cool pattern. It's not that hard to do: suppose we do this for sound, where the medium might be moving at speed $u$ in a certain direction but sound waves travel at speed $v$ relative to that medium. Perpendicular to the motion, you should see a time gap $2 L / v$. But in the direction of the motion, you should see a time gap $\big[L/(v+u)\big] + \big[L/(v-u)\big] = (2L/v)~[1 - (u/v)^2]^{-1}.$ The Taylor expansion of this latter term is $1 + (u/v)^2 + \dots$. Roughly speaking, if we're talking an "aether" which is at rest relative to the Sun we're moving at 30 km/s through the aether while the speed of light is closer to 300,000 km/s, so the effects are on the order of $(u/v)^2 = (10^{-4})^2 = 10^{-8}.$ Tiny effects! That's where interferometry comes in: interferometry allows us to look for effects on the super-tiny length scale of the wavelength of light (hundreds of nanometers) caused by this tiny effect aggregated over comparatively huge length scales (meters).

You can read Michelson's first paper, before the Michelson-Morley experiment, on WikiSource here.

In fact, with Michelson's first interferometer, the one that you're looking at, he did the calculation wrong -- he missed a factor of $\frac 12$ and illegitimately thought he had proven the isotropy of the speed of light when the fringe shift could have fit into the "noise" of the experiment without being observed properly. This missing factor is due to the tininess of the numbers involved: we neglected a path-lengthening of the perpendicular direction. Because there's a "cross-wind," we should expect that in a time $t$ the light travels the same distance $L$ but goes $v t$ perpendicular and $u t$ parallel to the wind, meaning that $L = \sqrt{(v~t)^2 + (u~t)^2} = v~t~\sqrt{1 + (u/v)^2}$, having a relative effect $1 + \frac 12 (u/v)^2 + \dots,$ and it's this which "halves" the fringing effect.

So therefore, a few years later, Michelson teamed up with Morley to create a more-complicated, more-sensitive detector (mostly by reflecting the light a lot through the different "arms" of the experiment to get a longer effective path length). This also failed to measure a so-called "aether wind," but at a much higher accuracy which made the experiment more definitive.

Not the answer you're looking for? Browse other questions tagged speed-of-light aether or ask your own question.