How are tidal gravity and curvature related?

I see tidal gravity mentioned in the literature sometimes, and sometimes people even say something like that is the “real gravity”. I am confused about the significance of tidal gravity, and what role it plays in curvature. Please correct me if I have any misconceptions, and I will try to explain my confusion.

Tidal gravity, by my understanding, is the difference in gravity between two points. As the strength of gravity falls as the inverse square of the distance from a spherical source, tidal in this sense indicates a strictly geometrical attribute. What I mean is that there is no difference between this effect and any other geometrical inverse square law, such as for the intensity of light as emitted by a point source. It is due to geometry. Individually, the radiated photons travel to infinity, but the overall intensity (flux) falls off as the inverse square of the distance, due to equal amounts of light passing through increasingly larger surface patch areas.

As for what curvature means, I like how it is presented in the Feynman lectures “curvature expressed in terms of the excess radius is proportional to the mass inside a sphere”. They also give the second law of gravitation as ” How objects move if there are only gravitational forces—namely, that objects move so that their proper time between two end conditions is a maximum.”

So it seems to me that tidal gravity is only kind of indirectly related to curvature. The spherical nature of the gravitational source of bodies such as planets and stars make the distribution of matter (energy) unevenly distributed. This (uneven density distribution of energy) gives rise to the curvature, or excess radius. The fact that the bodies are spheres (or point sources as viewed from a larger perspective) is also what gives rise to the inverse square law.

We could consider the situation for a gravitational body which is an infinite plane. In this case the gravitational strength would not fall as the inverse square of the distance. It seems to me that below the surface there would still be an excess radius, and therefore curvature would exist. But above the surface there are no tidal effects. Gravity is still attractive above the surface, but is space-time there curved?

I could be wrong, but from what I think I understand about tidal forces, there are three cases that I can think of. Please correct me if I am incorrect.

Gravitational tidal force 1: (The inverse square law) This is the decrease in gravitational strength as a body travels further from the center of an (idealized) spherical gravitational source.

Errors in my assessment of tidal forces notwithstanding, my question is what is the relationship between gravitational tidal forces and curvature.

I'm going to answer the question of your title, and also address the curious statement that "tidal gravity=real gravity".

Let's begin with your statement:

Tidal gravity, by my understanding, is the difference in gravity between two points.

You're very much on the right track here. When people talk of "tidal effects" and "tidal gravity" when not describing the actual phenomenon of ocean (or other fluid) tides on a planet, these are, I believe vague statements that to me mean something like "a gravity problem involving a spacetime neighborhood big enough that special relativity - the relativity of flat, Minkowski spacetime, cannot accurately describe the physics and events there". This would also explain the "real gravity" phrase: i.e. gravity for which the tools of general relativity are needed.

The curvature tensor indeed tells us when we are dealing with this "real", non-special-relativity-described gravity and when we are not, i.e. when we could handle the problem with special relativity. There is a mathematical construction that explicitly spells this delineation out very clearly: it is called the Riemann normal co-ordinate system for a neighborhood about a given event $\mathscr{P}_0$ in spacetime and these are explained in more detail below my main answer. Riemann normal co-ordinates annul the connexion co-efficients (the Christoffel Symbols) at the point in question, so they make a small neighborhood of $\mathscr{P}_0$ look exactly like Minkowski spacetime. The fact that such a neighborhood and co-ordinates exist can be thought of as how the Equivalence Principle enters GR: a momentarily co-moving inertial frame always exists at $\mathscr{P}_0$ and physics follows special relativity if we use the Minkowskian co-ordinates of this frame and we don't stray too far from $\mathscr{P}_0$. How far? The curvature tensor determines how far. As long as our proper distance/ time from $\mathscr{P}_0$ is much less than the reciprocals of the curvature tensor's components, special relativity is good to go. Informally, "tidal effects are negligible" as long as our spacetime neighborhood is much smaller than the reciprocals of all the curvature components. In this sense, curvature and the need to consider "tidal effects" are intimately related.

This all sounds sophisticated, but it is really nothing more than the situation shown below. We have a "curved" manifold $\mathcal{M}$ - think of the 2-sphere as a concrete example. The geometry of the manifold $\mathcal{M}$ - for example, the sums of angles inside triangles, how long parallel straight lines can be whilst remaining equidistant (how well Euclid's parallel postulate is fulfilled) - is approximately the same as the geometry of the tangent plane $\mathcal{T}$ as long as we as we stay within a distance $s$ from our initial point $\mathscr{P}_0$ such that $s\,\kappa \ll 1$, where $\kappa$ is the sectional curvature. 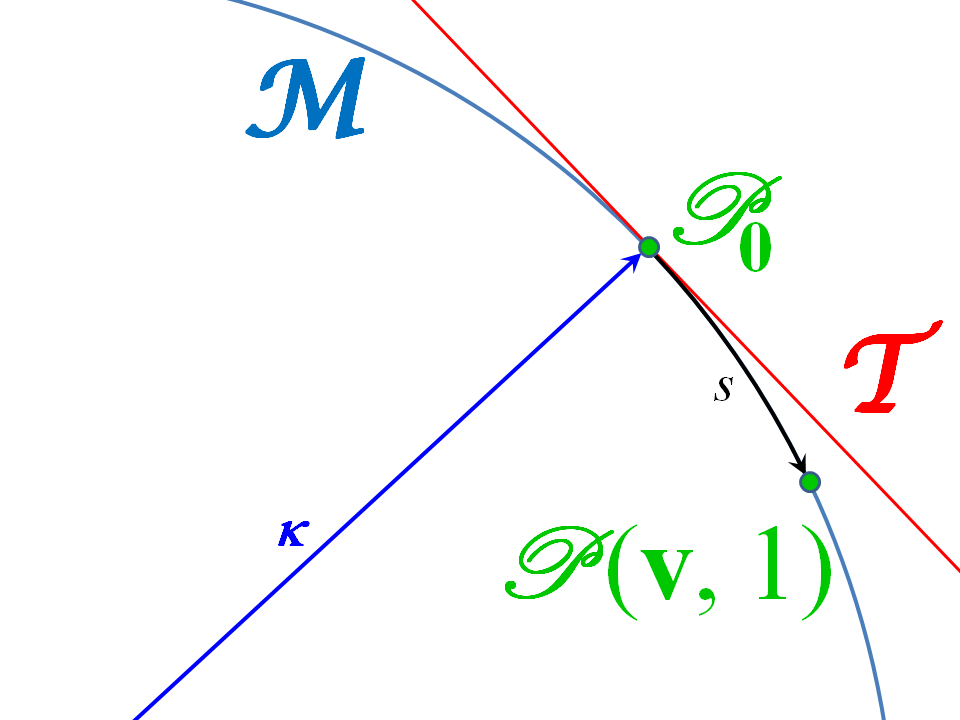 Afterword: Construction of Riemann Normal Co-ordinates and the Role of the Curvature Tensor in Defining the Extent of a Minkowskian Approximation

where the $R^a{}_{b\,c\,j}$ and like components are components of the curvature tensor. So the $\Gamma$'s are annuled at $\mathscr{P}_0$ and therefore the covariant derivative there is simply the same partial derivative one would use with flat Minkowski spacetime. The second line works out the derivative of the Christoffel symbols, i.e. defines "how far" you can wander from $\mathscr{P}_0$ before the Christoffel symbols become appreciable and things don't look like flat spacetime anymore. As you can see, the curvature components directly define this distance.

Not the answer you're looking for? Browse other questions tagged newtonian-gravity curvature tidal-effect or ask your own question.

4
Curvature of spacetime in only required to explain tidal forces?
6
Tidal force when planets and smaller objects collide
0
Tidal forces between Moon and Earth
3
If Saturn's rings cannot coalesce into a moon because of tidal forces, then how are shepherd moons able to exist?
2
How are relativistic tidal forces different from their Newtonian counterparts?
2
Are there tidal forces between the solar system and the galactic centre?