Why does a continuous water stream form ripples when colliding with a surface? [duplicate]

I was in the shower one day washing my hair, and noticed that the water falling off my hair formed perfect streams that ceased to break into droplets for quiet some distance (probably about 5-6 cm). I have kinda long hair so that greatly aided in the formation of the streams. I decided to see what would happen if the stream collided with a relatively flat perpendicular surface. I put my finger under the stream and was pleasantly surprised to see ripples upstream of the "impact". I then decided to move my finger up and noticed that these ripples became increasingly pronounced and seemingly formed a "wave". When very close to the origin of the stream (my hair) they began to turn into spherical beads. I decided to film the phenomenon to show you guys, and further below I have some theories as to what may be happening.

One theory I had was that the ripples are caused by a longitudinal wave traveling up stream, and since the compression zones are in water, they manifest as high pressure zones that cause the stream to bulge outwards as the surface tension holding the stream together is fairly flexible. The wavelength is most likely dependent (either directly or indirectly) on the speed of the falling as when I use faster flowing streams the wavelngth is a lot shorter, possible due to the faster impact. This may also be why when the impact is near the origin the stream begins to bulge more dramatically as the wavelength is a lot shorter due to the water not accelerating from free fall for as long and colliding with less force.

Another theory I had as to why the wavelength changes with finger height is that as you move down the stream since the water is moving a lot faster and the differences in speed become greater between the individual particles the water begins to decrease in density (thing spaghettification near black holes). If this does occur I don't believe it is as strong of a factor as the stream thins as it falls. This shows that rather than the spaces between the particles growing and remaining, they more likely come back together and instead manifest as the thinning of the stream.

If the cause is by both states above I may be able to formulate the density of the falling water based on the wavelength, but this is just a loose thought I have and needs more support.

I may be able to figure out if the cause is speed by looking at whether the wavelength changes as a parabolic function of finger height (as the impact speed and does, and this would possible show they're linked) but this would only be the case if impact shock waves wavelengths were linearly proportional to the impacts impulse. I would love to hear what you guys think of this idea.

My final, weaker theory I had was that the ripples are caused by the surface of the water attempting to establish a smooth transition onto the perpendicular plane, and as it curves outward, it causes a bend in the opposite way upstream which therefore causes another bend opposite to that until it smoothens out. I attempted to crudely illustrate this below. 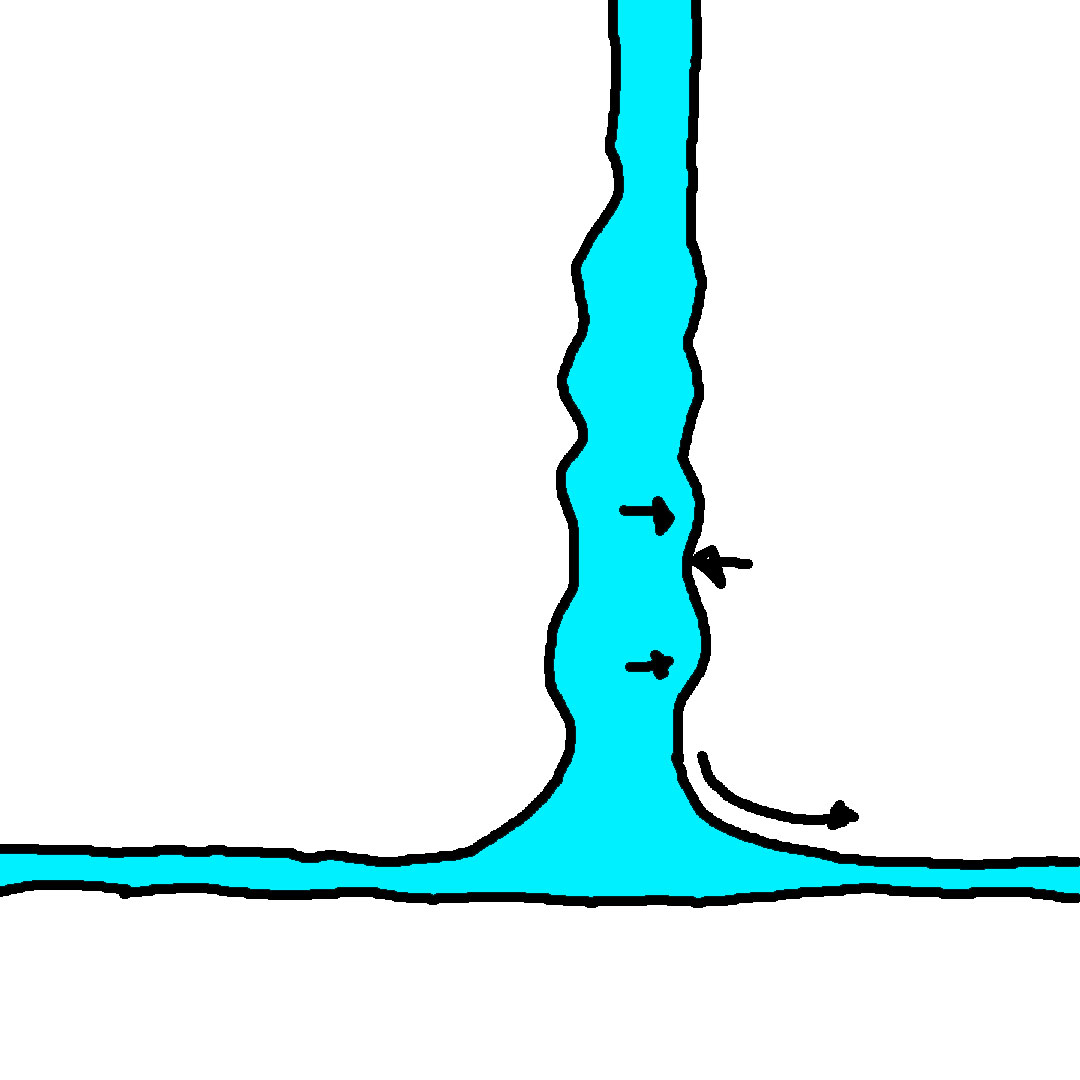 These are lose thoughts that came to mind to support the theory, and am eager to get any feedback and share any results with you guys. If you have a completely new theory or disprove my theories please post them below, any information may help bring this question to a close.

I'm currently doing a physics extended essay, and am willing to drop my current essay for something related to this phenomenon as it seems very interesting and would be pleasure writing about.

EDIT: A friend proposed that the waves are propagated from small currents resulting from the bottles/taps shape or the hole shape. I tested this using a uniform bowl and drilled a hole in it instead of poking one to get a more uniform hole and got identical results.

I reckon I'm going to get lit up like RoboCop because of this post but here we go:

I think the apparent separation of the water into droplets the higher up you go is caused because of two reasons: gravity and the cohesion/adhesion of water (also see Van der Waal forces).

Essentially, the cohesive/adhesive forces are responsible for keeping the water droplets stuck together as droplets, and even sticking to other things like the underside of your finger or (rather annoyingly) the side of a water pitcher when a waiter is trying to refill your glass.

Because these forces are really weak, we only see them at very short distances, and even a force as weak as gravity can easily disrupt them:

When your finger is far from the source, the falling water droplets have a greater potential energy (PE= Gravity x Mass x Height), and thus far too much energy to survive the impact on your finger, and get torn up and splashed about with little care for the cohesive force.

However, when you raise your finger toward the source, the distance that the water droplets fall is reduced, and the thus the water has a lower potential energy.

Because of this shorter distance, the droplets don't have enough energy to completely splash off your finger, and instead they have to compete against the cohesive/adhesive forces keeping them bound together. As you bring your finger higher and higher, we start to see the effects of surface tension more and more clearly.

When you get pretty high up the stream starts to form almost complete droplets due to LaPlace's Law, and they seem to be able to even stack up on on top of one another. I also believe the kind of odd separation of the droplets is due to a pressure wave (At least it looks that way after watching "Surface Tension Droplets at 2500fps - The Slow Mo Guys" on Youtube and seeing the exact same pattern you described!).

EDIT This might have been too simple an answer (if I even answered your question) for what you're going for, sorry for my noobery. I do believe the separation of the drops themselves is due to a pressure wave resultant from the water droplet's impact, they just don't separate completely because there's another drop crashing down on them before they can split up.

Suppose in zero gravity you squirt a smooth stream of water from a nozzle. A cylindrical tube of water with surface tension is not a minimum energy configuration. Spherical drops are minimum energy.

The cylindrical tube is a metastable state, like a ball perfectly balanced on a point. Any slight variation from a perfect cylinder will be increasingly amplified as it grows, and you end up with spherical drops. (I wonder if the astronauts have tried this fun experiment?)

I think this explains what is going on even with gravity. It does not directly explain why you get regular periodic ripples, although I think there are theories about this.

Not the answer you're looking for? Browse other questions tagged fluid-dynamics waves collision or ask your own question.

2
Kinetic energy loss when a rigid body falls into water
2
Why is there a wave on the water surface when I put something in the water?
3
Water falling, why does it spin?
0
Fluid dynamics? What will happen to liquid pressure and flow rate in a system that splits and recombines the the flow of liquid?
12
Patterns in laminar flow of tap water
1
Why do water ripples widen (in plain English)
0
Why does Torricelli's law seems to fail when water speeds up after I put my finger in a hose?
7
Why does a stream of water behave like this when aimed against a spoon or into a glass?
3
Torricelli's law doesn't seem to apply in an experiment. Why could this be? What is going on?