Can a Skydiver Land On a Large Slide and Survive? 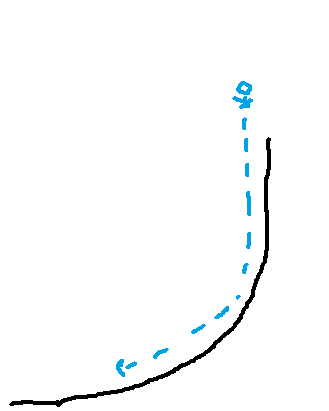 Please forgive my lack of artistic ability, but here's my question: Consider that a skydiver, without using his parachute, were to fall exactly parallel to a giant curved slide that starts at $90\,^\circ$ perpendicular to the ground and gradually curves until it is parallel to the ground. Can he survive?

My thinking tells me that if I stood at the top of the slide and slid down, making sure to keep contact with the slide, I would (if the top of the slide was high enough) eventually get to almost terminal velocity, yet when the slide starts to curve I would begin to feel an increase in G-force and friction, but no impact and thus would survive.

So then, if I were to jump directly above the slide given that I had enough time to adjust myself to be perfectly aligned with the slide as it started to shallow, (or even better, if I was able to have my body or part of my body scraping the slide) the impact when the slide moves from 90 degrees to 89 degrees would be soft enough for me to survive - and so forth until I'm actually sliding and no longer falling with the slide.

The answer is Yes and your thinking is correct.

You try to differ between impact and sliding on a curve. In fact the impact is just a sudden large force, while a curved (e.i. circular) motion similarly applies a force, just much smaller but also over a longer period of time.

The key in surviving any fall is to reduce the force on your body at "impact". A pillow does that. A curved slide does that. And they both do it by extending the impact duration. Remember first Newton's 2nd law:

Smaller momentum change $\Delta \vec p$ (that would be smaller speed or lighter skydiver) or larger duration $\Delta t$ will reduce the total force. A soft material like a mattress will extend $\Delta t$. And a curved slide will as well, as you explain it yourself, cause the momentum change over a much longer period of time.

Let's make life easy for ourselves by assuming that the slide is an arc of a circle:

We also assume the slide is made out of something with a very low friction, so the skydiver maintains a constant speed $v$ all the way round. The reason that using an arc of a circle makes life easy is that the acceleration felt by the skydiver is simply:

where $r$ is the radius of the circle (the length of the dotted lines in the diagram). The acceleration is shown by the red arrow, and always points towards the centre of the circle.

then to achieve this the slide would have to have a radius of 25m, which is actually quite reasonable.

In practice there would be a few problems of course. You'd have to land in exactly the right place at the top of the slide, and after you'd left the slide you'd still be travelling at 50 m/s but horizontally rather than vertically.

I have slid down a much smaller version of this at Burning Man. Paha'oha'o was a 30 foot tall volcano art piece which you climbed and then "sacrificed" yourself by dropping into a pit featuring a slide just like you mention. The drop features a 10 foot free-fall, just enough to take your breath away, after which the careful curve of the slide gently catches you and spits you out horizontally... rather fast. Safety Third! 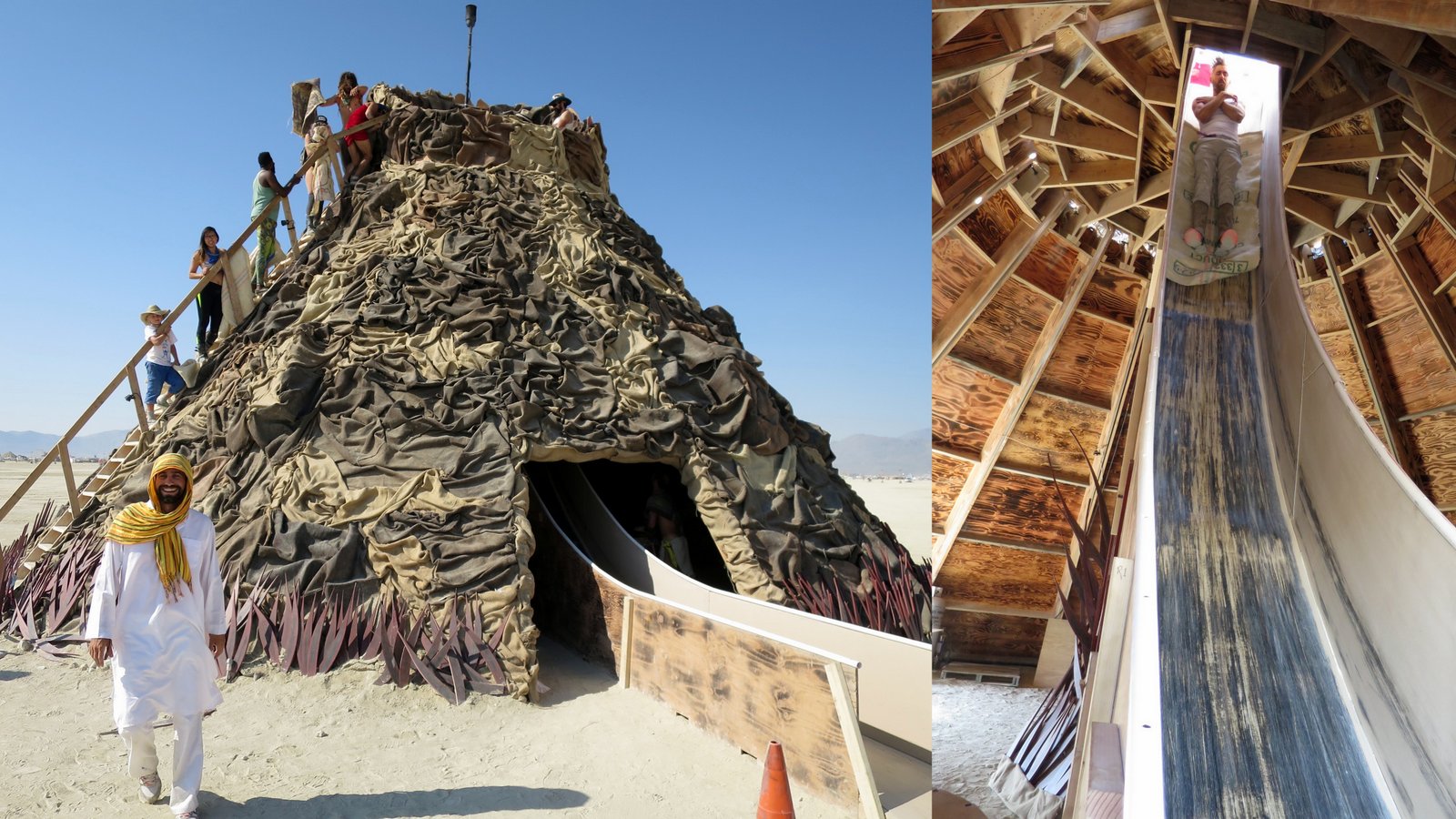 Picture from The Modern Nomad

It is much more intimidating at night, all lit up red and you can't see what you're dropping into.

Probably the closest to what you are asking about is the story of Ivan Chisov's survival (see Ivan Chisov); but there have been several other similar cases (see for example 10 Amazing Free Fall Survivors).

Assuming terminal velocity of 200 km/hour, the scenario seems equivalent to stepping out of a car that's travelling at 200 km/hour. In that case it's not the fall (hitting the road) that kills you, it's the friction (i.e. sliding or tumbling along the road).

There might be a minimum of friction initially (when you're falling parallel to a vertical wall) but that increases towards one gravity as the wall becomes horizontal.

It might work if you timed it with a very long near-vertical to bleed off speed ("bleed" being more than a metaphor); you couldn't land on a sled (because you'd hit the sled at 200 km/hour) but perhaps you could bring a sled with you (instead of a parachute) when you fall, e.g. harnessed to your back, and land on it; or be wearing skis or roller skates.

John's answer has 40m of ramp, if you assume the same deceleration 40m of increasing resistance can stop you safely.

I still think that that sounds as "safe" as coming off a motorbike at 200 km/hour, and sliding along the road for 40 m -- i.e., not safe at all. Presumably someone has already tried it?

My guess is, what if we assume that the skydiver is spherical and already spinning when they touch the wall (to minimize being scraped along the wall)?

Assume a sphere with 1 m radius (2 m diameter), and assume that this doesn't change the terminal velocity. The circumference (2 pi r) is 6 m, at 50 m/sec that's 8 rotations per sec.

8 rotations per sec and a 1 m radius implies a centrifugal force of about 250 g: at 250 g their head would separate from their neck, aren't I right?

Spinning like a human-sized cylinder with a diameter of only 1 m makes that worse (i.e. twice the centrifugal force, up to 500 g): you couldn't keep your arms and legs together.

IMO you need to be in the centre of a large sphere (20 m in diameter would be 1 rotation per second, which is only 4 g of centrifugal force at 1 m from the centre), or not rotate at all i.e. land on wheels or a sled.

Yes. In fact it would be better to imagine that you skydive towards a "track" that you can strap a "chair" onto, and then the chair is stuck on the track. the acceleration to keep you in a circular orbit of radius $R$ is only $v^2 / R;$ with terminal velocity being about $v \approx 56 \text{ m/s}$ a $1~g$ acceleration will be accomplished by a radius of curvature of about $300 \text{ m}.$ That's about as high as a modest skyscraper (the Empire State Building is I think $400 \text{ m}$ or so), but you can lower it if you're willing to accept, say, a 2g or 4g acceleration.

The real problem is going to be that you need your chair to have brakes as well, otherwise when you get to the ground you'll still be going at terminal velocity.

Not the answer you're looking for? Browse other questions tagged newtonian-mechanics newtonian-gravity momentum friction free-fall or ask your own question.

4
Why Can a Skydiver Hit the Ground and Be Killed?
-1
Can a person free fall onto a big block of jelly and survive disregarding the eventual suffocation?

31
Can I survive a free fall using a ramp and a rope?
13
How large can planets or moons appear?
5
Is the Normal force dependent on the density of the object the body is resting on?
1
Target that topples like real person
0
Question about inertial reference frames
0
Is it possible to avoid a dangerous collision with the ground after free fall by converting the potential energy into rotational kinetic energy?