Does calculus work on the quantum scale [duplicate]

I have read somewhere that Leibniz championed the idea that the world is continuous as this was needed for his (or maybe Newtons) new invention (or discovery?) of calculus. But if I am not mistaken a fundamental principle of the quantum world is that things can only take on disjointed, discrete values. So does calculus break down when studying the subatomic world? if so, does particle physics simply rely on algebra and arithmetic or is there some form of higher level math that was need to be conceived to work in this new domain?

Even though calculus was invented in order to study a physics problem, it is a mathematical tool that is very general, that also describes discrete situations.

But if I am not mistaken a fundamental principle of the quantum world is that things can only take on disjointed, discrete values

You are confusing necessary and sufficient. It is sufficient to say "this is the quantum world" when studying the discrete spectrum of hydrogen. But the quantum world is not necessarily discrete, as it has also lots of continuous spectra.

The mathematical model that describes the hydrogen atom, the Schrödinger equation, is using calculus because it is a differential equation.

Calculus works in two senses and fails in a third one: as a mathematical theory, it is well-founded, independently of Newton and Leibniz invention. For operations with space and velocity, it also works, because these quantities are not even discrete in usual quantum mechanics, and the only argument can come if you go "atomistic"; then it must be substituted by Stochastic Calculus, but I would not consider it a fail as it comes from having a completely different starting point.

On the other hand, Calculus fails as a theory of Mechanics, and then we substitute this theory by Quantum Mechanics. This is a fail because Calculus aims to look for an extreme of an "action functional" which happens to be physically in the same units that the Planck constant. So the very quantity that it aims to manipulate is discrete in the real world.

One of my personal pet theories is that this problem was already noticed by Newton and was one of the causes of the delay to publish the Principia. The first problem he solves, the elliptic orbits, require to be able to allow for infinitesimal variations of angular momentum, or of infinitesimal slices of the area swept by the particle, which also involves angular momentum. This section is one of the most heavely corrected by Newton across different editions. In a different world, he could have tripped with the idea of asking discrete angular momentum to get rid of some of the problems!

You can see the problem already in Galilean free-fall: 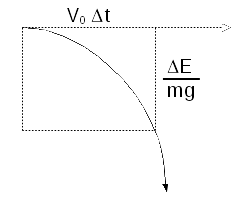 The area of this rectangle is essentially proportional to $\Delta E \Delta t$ so any geometrical proposition that assumes that it becomes as small as we want must to sort out the obstruction of Heisenberg Principle (actually, for Energy and Time, the principle was suggested by Sommerfeld and others). And it was even worse in Newton age, where there was not a clear concept of variable and then the best hope to geometrise time was to consider it as the area from Kepler law; some risk of circular reasonment was apparent then.

Not the answer you're looking for? Browse other questions tagged quantum-mechanics spacetime discrete calculus or ask your own question.