Confusion about the resonance

I get confused with the concept of resonance. Many materials suggest that in order to achieve resonance, the system must undergo simple harmonic force ($F=F_0\sin(\omega t)$), and at the natural frequency. However, it is too hard to obtain the simple harmonic force, and most of the natural phenomenons involving resonance do not need this kind of force either. So what is the exact condition for resonance to happen? Does it only need to be influenced by a force at a natural frequency, no matter what type of force is it?

In particular, there is a question about it: the old man carries a bucket of water on the back of his bike. He travels at a constant speed in a straight line. Assuming holes on the street are aligned the same distance from each other. Then at what velocity does the man bike that the water suffes from resonance? I need a clear explanation.

For resonance to occur you must have

(1) A 'system' capable of 'ringing'. Ringing means that the system has internal structure that can admit energy from outside the system and which allows energy to move about within the system in a periodic manner. The harmonic oscillator is an example of a linear system that is capable of ringing, but the system does not necessarily need to be linear.

As for your specific problem ask yourself does the man-bike-water bucket system have the ability to ring? Generally you need some way to move input energy from a potential to a kinetic state. Next you need to ask at what linear speed does the impact of the tires on the bumps create energy input that can excite the system.

The key tool that makes resonance applicable to many general situations is the concept of Fourier series.

So if you have multiple frequencies driving your oscillator, you can add them up (as the oscillator is linear), and get some complex motion that's the sum of many sinusoidal responses of various amplitudes. But it's not too hard to get a computer to just add them all up.

Now we can work out the response of the oscillator to any sinusoidal driving force, or any sum of sinusoids. The real power comes when we realise we can (more or less) represent any periodic function as a sum of sinusoids. For instance, take the function in black below, a square wave: 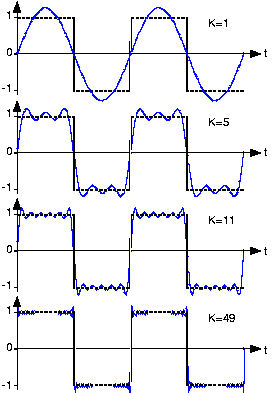 As you can see, the sum quickly becomes identical to the square wave, and in actual fact you can prove that in the limit they are the same function. In general we can work out what combination of sinusoids make up any periodic function.

So the fact that the mechanics of resonance are often only worked out using sinusoidal waves doesn't matter, as it's possible to express any complicated force as a combination of sinusoids, then just add up the effect that these components have on the oscillator individually to get the total.

For your example with the bucket of water, to work out the motion of the water, you would need to examine the force on the bucket due to the holes, and see what sinusoidal components there are at each frequency. Working through the analysis shows that if you want the most response from the bucket, you should ride such that you hit the holes at a frequency equal to the natural frequency of the bucket. But you can also get strong responses if you cycle such that you're at e.g 1/2, 1/3 etc of the bucket frequency, because of the distribution of the impact's sinusoidal components.

Not the answer you're looking for? Browse other questions tagged homework-and-exercises newtonian-mechanics harmonic-oscillator resonance or ask your own question.