Flat throw vs 45 degree throw of a ball

I am not a baseball expert, but the time, seconds, will maybe matter here. You are correct, the maximum distance, theoretically, is when you throw at a 45 degree angle. However, in baseball you might want the maximum distance compared to how long time it will take. You maybe want the ball to get as far as possible, as fast as possible? This might make your coach a bit more correct?

Also, of course, air resistance is in play here too.

Also, since you throw from above the shoulder, not from the ground, the ball is usually thrown a foot or more above the altitude where it's caught and that shaves another degree or two off the optimal angle for distance, so optimal distance, I'm thinking maybe 40 degrees - as a guess.

I agree with Jakethesnake and I suspect your coach is just teaching what he was told when he played baseball and he's not a student of physics. When you throw straighter, it's a faster throw and that's the desired outcome in what is sometimes referred to as the game of inches. You want to hit the cutoff man or the 3rd baseman, not throw the ball as far as you can.

So, yeah, your coach gets an F in physics, but he knows his baseball.

I am a baseball fan (and a physicst), and your coach is misleading you a little. First, in the absence of air resistance, a 45-degree launch will get the ball there with miminum energy expenditure. But not, as the other answers suggest, minimum time. And time matters. A lot. :-)

Your coach should also be telling you to plan your longer throws such that they bounce once before reaching the destination (typically direct to homeplate), for the same basic reason of minimizing elapsed time. The speed lost due to the bounce causes a time penalty much less than the time it takes to throw a ball in a high-enough arc to reach home on the fly. The tradeoff between direct throw and one bounce depends on the distance and the absolute strength of the outfielder's arm.

It's worth noting that a few third basemen (originally a certain disgraced gambler) will throw a one-bouncer to first base for the same reason.

Why does my sports coach tell me that when I'm fielding I should throw the baseball 'flat' to get the maximum distance? I thought from physics that you get the most distance from throwing at a 45 degree angle?

The second question first, this is true if you are a robot throwing a ball on the Moon (no atmosphere) that releases the ball at the same speed regardless of the release angle. You are a human, not a robot, and you are throwing the ball in the Earth's atmosphere rather than on the airless Moon. You need to account for physiology and realistic conditions. When you do that, you will find that the optimal angle is well under 45 degrees. The initial velocity of a baseball thrown by a human depends on release angle; the highest speed releases are with throws that are close to horizontal. This alone drops the optimal angle to less than 40 degrees. Presumably you are throwing the ball overhand. When you release the ball it will have a good deal of backspin. This gives lift. Accounting for lift and drag drops the optimal angle for maximum distance even more, to 35 degrees or less.

Now for the second question. While your coach's reasoning was incorrect, his advice was spot-on. Your goal is not to throw the ball as far as you can. Your goal is to get the runner out. You will not get the runner who started at first or second base out with a long-distance throw if the distance to home plate is at the very edge of your throwing capabilities. The time aloft will be far too long, and just as importantly, your accuracy will be lousy. You'll be better off throwing to the cutoff man.

Check out this list of eight phenomenal baseball throws made from deep in the outfield at http://www.hardballtimes.com/a-physics-comparison-of-great-throws-from-years-past/. All have three things in common: They were incredibly fast, incredibly accurate, and thrown at a rather low elevation angle, from 5.9 degrees to 14.3 degrees.

This is a physics site, so I'm going to pitch a website dedicated to the physics of baseball, http://baseball.physics.illinois.edu. This is written by an emeritus physics professor at UIUC who also is a big fan of baseball.

Let's analyze with some simplifications.

Ignoring friction for a moment... if you throw a ball at angle $\alpha$ with velocity $v$ such that it will fly for a distance $d$, and it is caught at the same height as it is released, then we can quickly calculate the velocity and time of flight.

If you know the distance you want to throw, you can now compute the velocity as a function of angle:

and the time taken to cover the distance

It follows from this that if you have a strong enough arm, the time for your throw will be shorter if you can throw at a lower angle; as David Hammen pointed out, this might even mean throwing with a bounce.

For example, let's take a look at the amazing throw by Yoenis Cespedes (link from David Hammen's post), clocked at 101.5 mph with a start angle of 10 degrees and reaching its target in 2.8 seconds. He might have save himself some trouble with a 45 degree lob - but (using all the approximations above) it would have arrived about 2.8 seconds ($\sqrt{\frac{\sin{45}}{\sin{10}}}$) later... when there was just a split second before the Kendrick would have been safe.

Now this is a simplification - air resistance, spin, and the difference in height between release and catch will all affect the result. But even the basic physics says that throwing fast and low will get more people out. The "high pitched throw" may be needed to get greater range - but at the top end, outfielders that can launch a 100 mph bullet don't need that...

A 45 degree angle gives you the maximum distance to the point where the ball first hits the ground. That's not where a baseball will stop. If you hit the ball at a lower angle, more of the total speed will be in the horizontal direction, and the ball will still continue with a fairly high horizontal speed after bouncing. Thus, the point where friction finally stops the ball may be quite a bit further when you hit it at a low angle.

If you throw a ball at 60mph at 0 degrees, the horizontal velocity is 60mph. 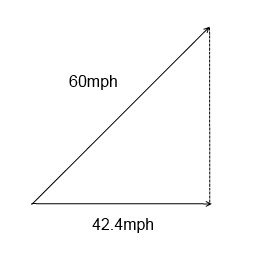 Thus, on a frictionless surface with no wind resistance, throwing it horizontally will get it to the base the fastest no matter how far it is away.

In the real world we have wind resistance and friction, so each bounce will slow the ball depending on the surface and ball-spin, and wind direction/speed will also come into play. We also have to worry about not having a bounce too close to your teammate to avoid errors. Here, a little loft will not slow the initial horizontal speed much and it will cause less bounces, so usually it is a good trade-off.

Not the answer you're looking for? Browse other questions tagged kinematics projectile drag distance or ask your own question.

2
Is it possible to throw an object faster but over the same distance?
1
Friction due to air drag at high speeds
8
Why does a small object stay in one place after being shot from a big gun?
1
Find the max projection angle so that distance from point of projection always increases
3
Conservation of momentum in a baseball
4
Why can I throw a larger stone farther than a smaller stone?