Asteroid as a "free slingshot?"

The question Halley's Comet as a "Free Taxi" had an interesting thought, even though it didn't work out. I was wondering about a variation on the idea. Use a cable, as illustrated below. Could this be made anything like practical given reasonable assumptions? 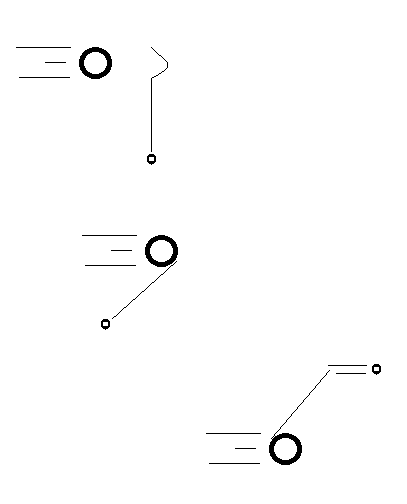 Late thought - Add a small rocket to the net. Accelerate the free end of the cable to match velocity with the asteroid while leaving the probe still. Now you don't smash the net, and you still haven't used all that much energy.

It still may not be a reasonable approach, but it is sounding more possible now.

Think of shooting a shell from a battleship at an instrument, and designing a device that allows it to hold on and continue working while it is transported by the shell. That's probably easier than doing the same with an asteroid.

If you take a look at this table of near-earth asteroid approaches, you'll see that the relative velocity column has units of km/s. We simply have no materials that can cope with such a difference without breaking or crushing.

Right now, we tend to limit accelerations on launch vehicles to around $4g$ or so. Lets say we were dedicated and built some instruments that could withstand a very aggressive $40g$. Now we want it to grab on to an asteroid with a relative velocity of $6 km/s$. it would require a minimum of $15s$ for the acceleration. In that time, the asteroid would have moved over $90km$. We'd need to have some mechanism that is far stronger than anything we have today, and it would have to be able to interact with the object at distances on the order of $100km$.

Not the answer you're looking for? Browse other questions tagged rocket-science asteroids solar-system-exploration or ask your own question.

19
Halley's Comet as a "Free Taxi"
0
Could an asteroid capture an object and bring it into orbit as the asteroid moves through space?

7
Is the Apophis asteroid a concern?
4
How bright will an asteroid be?
8
Orbital mechanics and rocketry: Is it ever a good idea to intentionally lower periapsis?
1
Asteroid collision debris calculation
3
Why was the asteroid 101955 Bennu chosen by the NASA OSIRIS-REx sample return mission?
19
Halley's Comet as a "Free Taxi"
4
NASA's asteroid mission and angular momentum