Why doesn't the moon crash into the Earth? [duplicate]

I was searching about 'why do not moon crash to earth due to its gravity?'Then by reading physics stake exchange existing questions I came to know that its the sideways motion of the moon that keeps moon in its orbit.

So my question is:- Moon is in circular or ellipthitical orbit and during its orbit moon is always pulled towards the centre of the earth but moon is changing its direction at every point because it is in circular or ellipthitical orbit, so the direction of force pulling moon towards the centre of the earth will also change at every point on the other hand the sideways motion of moon is always in a particular direction then there must be a point in the moon's orbit when sideways motion and gravity will act in same direction and moon should crash to earth.Then why it does not crash?

If someone (like superman) could stop the moon from its orbital motion then yes it would fall towards the Earth. Only then the direction of motion would be parallel to gravity.

Same with the I.S.S or the satellites orbiting Earth. They could also spiral in and crash because the atmosphere is taking away their kinetic energy.

Just like the comment says imagine that you throw a stone from a high point horizontally (see picture). The more initial (horizontal) speed you give to the stone the further it will land. But the earth isn't flat ! If you give it too much speed , it will run out of land to crash! It will keep flying under the perpendicular force of gravity. Just like a bull running around in circles while the cowboy pulls him with a rope. So it will fly a full circle and hit you at the back!

In fact you can calculate that speed because then Gravity serves as the centripetal force: $G\frac{M_{earth}M_{moon}}{R^2}=M_{moon}\frac{v^2}{R}$, If you know the mass of the Earth and the distance between them. Although the mass of the moon is large and this serves only as an approximation (see two body problem). 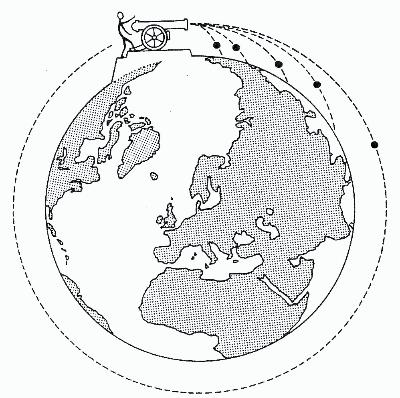 Check also the xkcd blog for some ideas about orbits.

Not the answer you're looking for? Browse other questions tagged newtonian-gravity orbital-motion earth moon or ask your own question.

75
Why doesn't the Moon fall onto the Earth?
-3
Why don't Moon collide with Earth but revolves due to gravity?

47
Why CAN we see the new moon at night?
5
Why does the moon stay with the Earth?
1
How gravity can give energy for unlimited time?
1
Reconciling geosynchronous orbits and why the moon is moving away
0
Why the Moon does not change its orbit from Earth to an another planet?
1
What happens to the water on the surface of the Earth if the Earth is not rotating about its axis in the Earth-Moon system?