Why don't electrons crash into the nuclei they “orbit”?

I'm having trouble understanding the simple "planetary" model of the atom that I'm being taught in my basic chemistry course.

I understand that certain aspects of quantum mechanics were created to address these problems, and that there are other models of atoms. My question here is whether the planetary model itself addresses these concerns in some way (that I'm missing) and whether I'm right to be uncomfortable with it.

You are right, the planetary model of the atom does not make sense when one considers the electromagnetic forces involved. The electron in an orbit is accelerating continuously and would thus radiate away its energy and fall into the nucleus.

One of the reasons for "inventing" quantum mechanics was exactly this conundrum.

The Bohr model was proposed to solve this, by stipulating that the orbits were closed and quantized and no energy could be lost while the electron was in orbit, thus creating the stability of the atom necessary to form solids and liquids. It also explained the lines observed in the spectra from excited atoms as transitions between orbits.

If you study further into physics you will learn about quantum mechanics and the axioms and postulates that form the equations whose solutions give exact numbers for what was the first guess at a model of the atom.

I can't see how a negatively charged electron can stay in "orbit" around a positively charged nucleus. Even if the electron actually orbits the nucleus, wouldn't that orbit eventually decay?

Yes. What you've given is a proof that the classical, planetary model of the atom fails.

I can't reconcile the rapidly moving electrons required by the planetary model with the way atoms are described as forming bonds. If electrons are zooming around in orbits, how do they suddenly "stop" to form bonds.

Right. There are even simpler objections of this type. For example, the planetary model of hydrogen would be confined to a plane, but we know hydrogen atoms aren't flat.

My question here is whether the planetary model itself addresses these concerns in some way (that I'm missing)[...]

The quantum-mechanical resolution of this problem can be approached at a variety of levels of mathematical and physical sophistication. For a sophisticated discussion, see this mathoverflow question and the answers and references therein: https://mathoverflow.net/questions/119495/mathematical-proof-of-the-stability-of-atoms

At the very simplest level, the resolution works like this. We have to completely abandon the idea that subatomic particles have well-defined trajectories in space. We have the de Broglie relation $|p|=h/\lambda$, where $p$ is the momentum of an electron, $h$ is Planck's constant, and $\lambda$ is the wavelength of the electron. Let's limit ourselves to one dimension. Suppose an electron is confined to a region of space with width $L$, and there are impenetrable walls on both sides, so the electron has zero probability of being outside this one-dimensional "box." This box is a simplified model of an atom. The electron is a wave, and when it's confined to a space like this, it's a standing wave. The standing-wave pattern with the longest possible wavelength has $\lambda=2L$, corresponding to a superposition of two traveling waves with momenta $p=\pm h/2L$. This maximum wavelength imposes a minimum on $|p|$, which corresponds to a minimum kinetic energy.

Although this model is wrong in detail (and, in fact, agrees with the actual description of the hydrogen atom even more poorly than the Bohr model), it has the right ingredients in it to explain why atoms don't collapse. Unlike the Bohr model, it has the right conceptual ingredients to allow it to be generalized, expanded, and made more rigorous, leading to a full mathematical description of the atom. Unlike the Bohr model, it makes clear what is fundamentally going on: when we confine a particle to a small space, we get a lower limit on its energy, and therefore once it's in the standing-wave pattern with that energy, it can't collapse; it's already in the state of lowest possible energy.

The treatment of electrons as waves has combined with spherical harmonics (below image) to form the foundation for a modern understanding of how electrons "orbit." 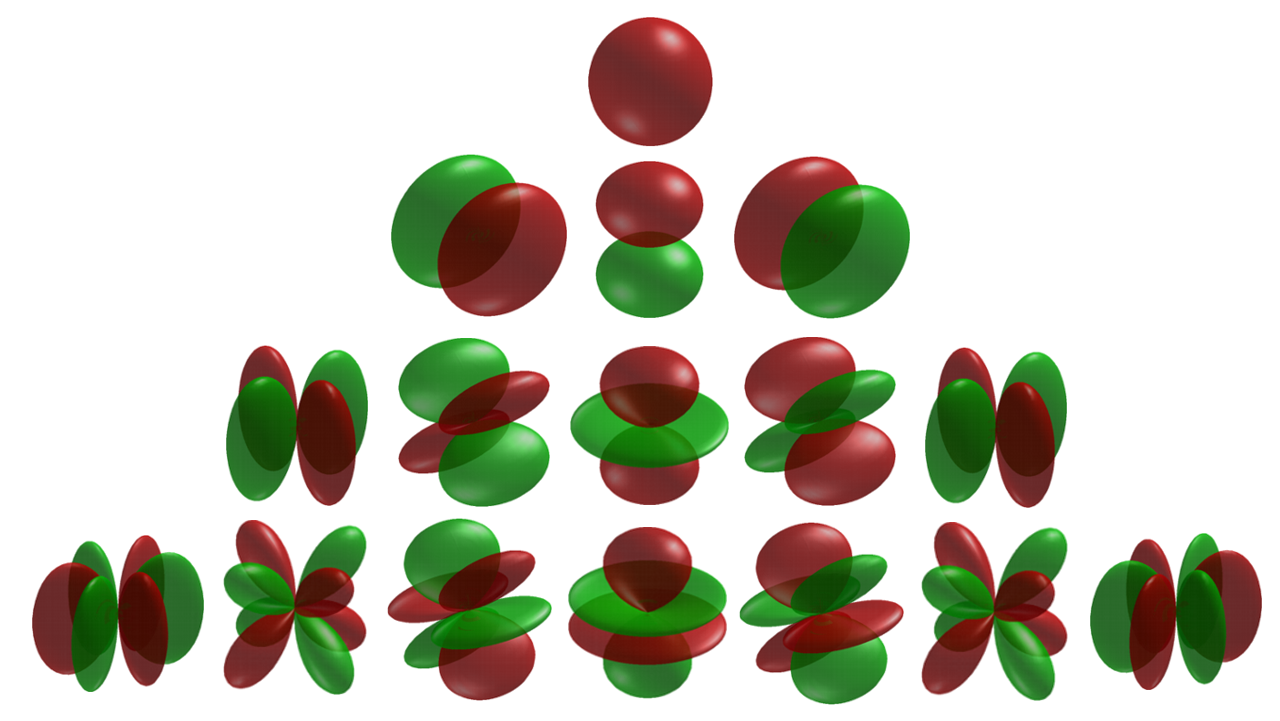 Tweaks to the spherical harmonic differential equations yields the Schrodinger equation, which yields the accepted models of electron orbital structures: 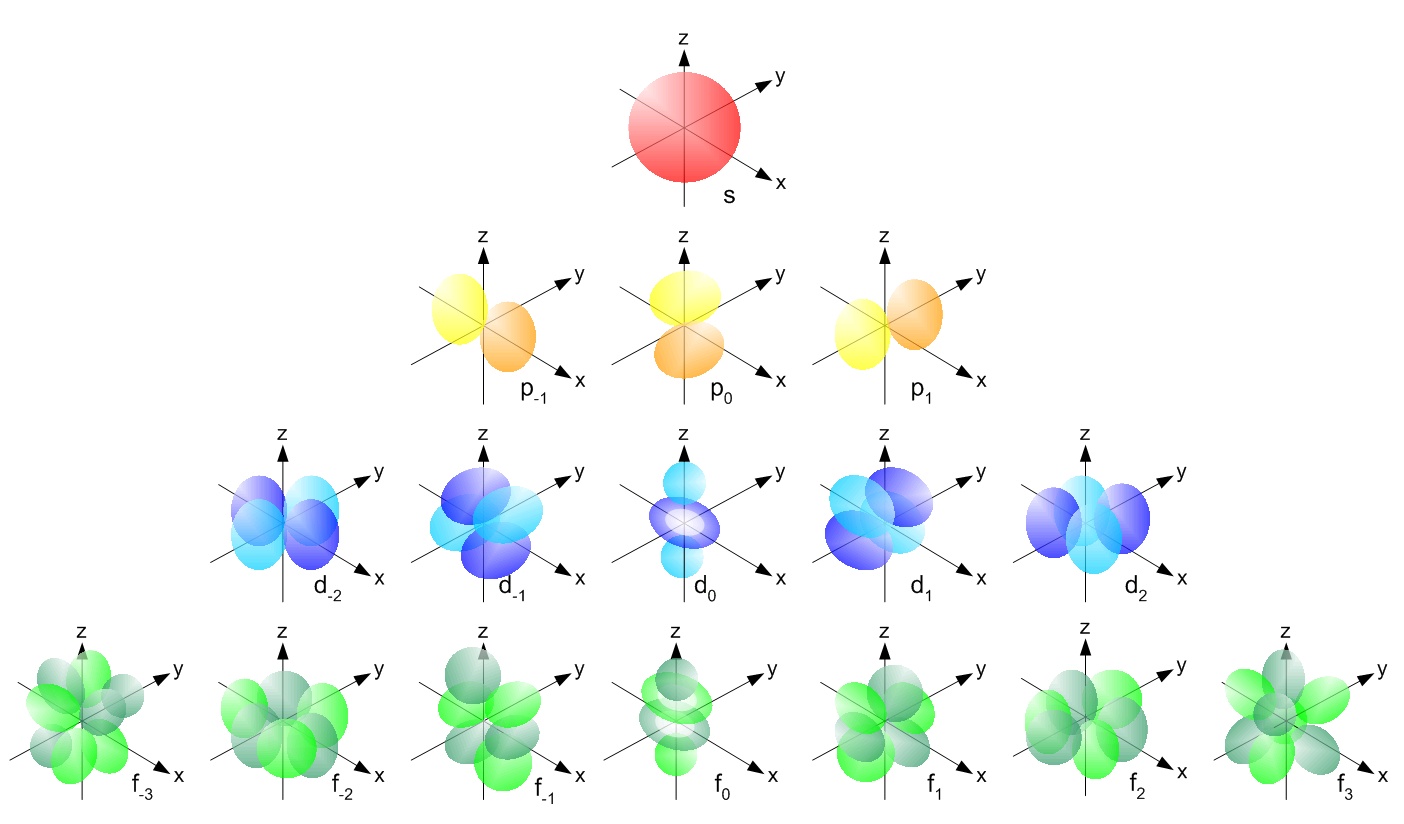 The only element for which the Schrodinger equation may be solved exactly (approximation is necessary for the rest) is Hydrogen: 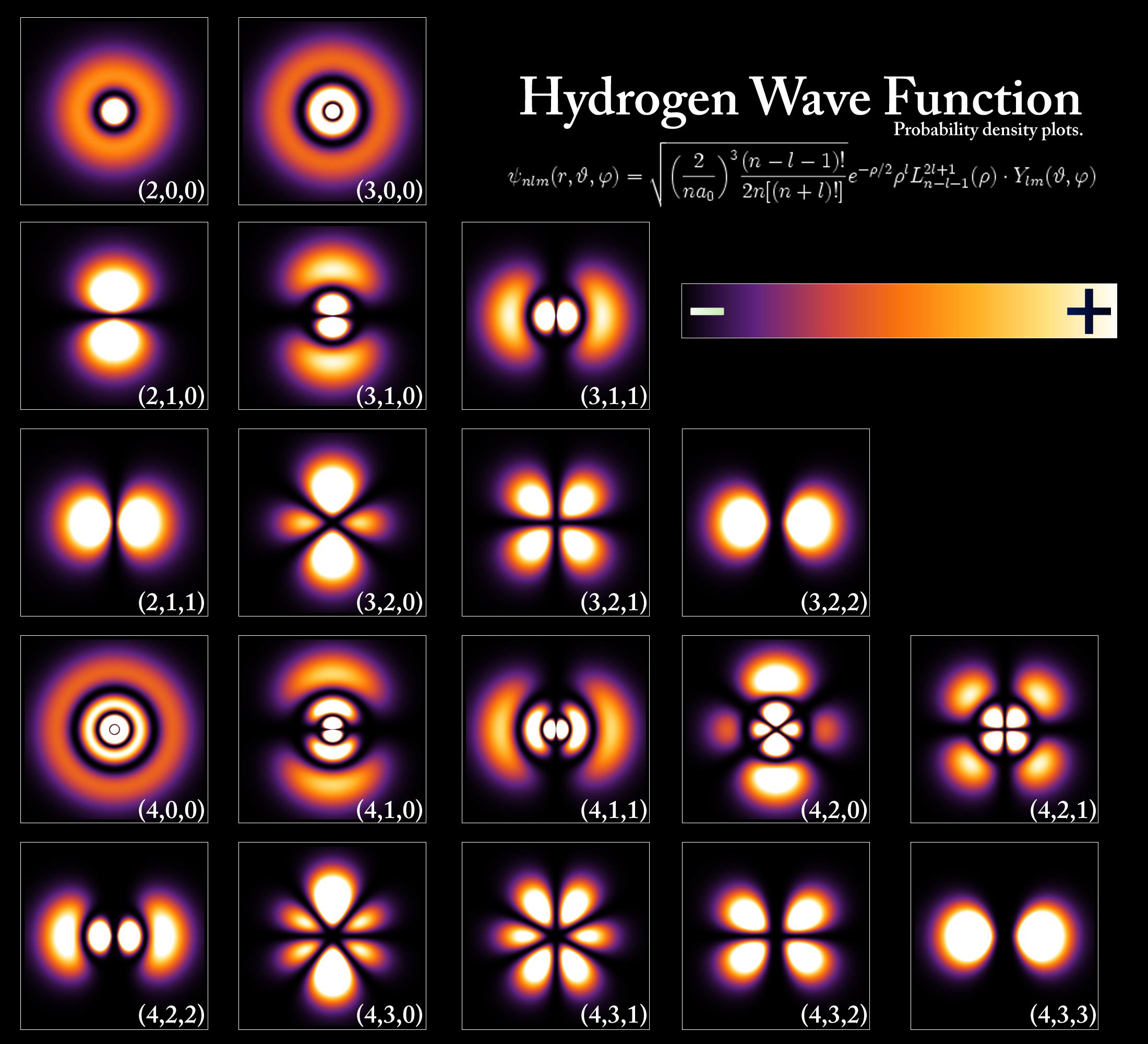 These models predict essentially zero probability that an electron will enter the nucleus for most orbitals. In the orbitals where there is some time that an electron spends time in the nucleus it is believed to be energetically unfavourable for the electron to bind to the proton. If electrons were merely point charges this would not be possible, but the wave-nature of electrons creates phenomena such as the Pauli-exclusion principle that predict otherwise.

Bohr, a genius, just asserted that the phenomena at the atomic level were a combination of stationarity while being in an orbit, and discrete quantum jumps between the orbits. It was a postulate that yielded some agreement with experiment and was very helpful for the future development of quantum mechanics solely because it got people to think about stationarity and discreteness.

2 It is totally useless for discussing chemical bonds. You are quite right to be uncomfortable with it.

3 It would be stretching a point, but you could see the Quantum Mechanics of Heisenberg and Schroedinger as the only way to salvage the planetary model of Bohr, by finally coming up with an explanation for the stationarity of an electron's state around (but no longer considered as « orbiting ») the nucleus and an explanation for discrete jumps as a response to perturbations from outside. But this required seeing the electron more as a wave and hence not having any definite location along the orbit.

You know, of course, that atoms are made with positive protons in the nucleus and with electrons outside. You may ask: “If this electrical force is so terrific, why don’t the protons and electrons just get on top of each other? If they want to be in an intimate mixture, why isn’t it still more intimate?” The answer has to do with the quantum effects. If we try to confine our electrons in a region that is very close to the protons, then according to the uncertainty principle they must have some mean square momentum which is larger the more we try to confine them. It is this motion, required by the laws of quantum mechanics, that keeps the electrical attraction from bringing the charges any closer together.

From the askers perspective, the explanatory powers of most of these answers seem pretty bad. I prefer Emilio Pisanty's answer here: Why isn't Hydrogen's electron pulled into the nucleus? because it explains exactly how the uncertanity principle dictates the facts of this atomic reality.

The summarized problem is that, if the charged and attracted electron and proton fell into each other, we would know exactly their position, and by the Heisenberg uncertainty principle our knowledge of the momentum would be immensely small, it could be anything. The chances therefore of the momentum being large enough to "escape" this essentially electrostatic attraction are very large. Therefore, the electrons recede to an average distance from the nucleus. The electron is in the position it is (or rather average position) to keep these two opposing forces in balance.

The Heisenberg uncertainty acts as a force of repulsion, in similarity with the effect of compressing a gas. More compression=more pushback.

Sometimes electrons do "crash into the nucleus" - it's called electron capture and is a mode of decay for some unstable isotopes.

There is no orbit around nucleus, since expectation value for angular momentum for ground state $\psi_0$ is zero; $\langle{\psi_0}\rangle=0\;.$ That is why we cannot talk about classical planet model, like Bohr did. Also Heisenberg's uncertainty principle prevents electrons from having well defined orbits. Electron is just somewhere outside nucleus.

Since proton is positively charged and electron is negatively they have attractive Coulomb's force. But tiny quantum particles, as electrons, behave as waves and they cannot be compressed into too small volume without increasing their kinetic energy. So electron on its ground state $\psi_0$ is on equilibrium state between Coulomb's force and strange quantum pressure.

However if the electron manages to get crashed into the nucleus, then it would gain an infinite amount of energy according to the uncertainty principle which is impractical to occur in nature.

A planet orbiting a star with eccentricity smaller than unity would have to lose kinetic energy in order to spiral into the star. This could happen in the long run for a planetary system due to emission of gravitational radiation, and due to tidal forces, heating up the star or the planet followed by radiative cooling. In quantum mechanics this cannot happen.

If the planet has eccentricity equal to unity, analogous to an s orbital, it crashes straight into the star where its kinetic energy is converted into heat. Again, in quantum mechanics this cannot happen.

Whether quantum mechanics explains why, or only how, by construction, such an atomic collapse does not happen is a matter of interpretation. Note that electron capture by some nuclei as discussed in other replies requires that the weak interaction is taken into account. I interpret the original question as being about any nucleus, not just the ones susceptible to electron capture.

Not the answer you're looking for? Browse other questions tagged quantum-mechanics electrons atoms models or ask your own question.

51
Why do electrons occupy the space around nuclei, and not collide with them?
3
What prevents the nucleus from wandering into the electron cloud?
2
How is ionization explained in Quantum Mechanics?
0
Bohr/De Broglie simplfied model - joining orbitals
10
Electron as a standing wave and its stability
32
Where are the inaccuracies in the Bohr model of the atom?
1
Quantum mechanical picture of “electrons orbiting the nucleus”
0
Electrons in the quantum mechanical model of the atom