Why photons reflect off glass?

Why photon reflects and refracts through glass? Some photons pass through glass and some reflects.I know this is due to energy levels of electrons of glass, an incoming photon is unable to excite the electron to a different energy orbit.

(Not sure! Just a thought)Is this due to atoms of different substances like water,glass or wood etc curve spacetime differently and thus it influences how photons interact with matter? i.e. some photons reflect and some refract.

This principle, named after Christiaan Huygens and Augustin-Jean Fresnel, is a method of analyzing the wave propagation patterns of light, especially in diffraction and refraction. It states that every unobstructed point on a wave-front emanates secondary spherical waves in all directions. Hence, the net light amplitude at a given point is the vector sum of all wave amplitudes at that point. This principle makes it very useful in visualizing what happens during light diffraction.

Although, as Alex says in his answer, you can use the QFT approach, I would like to provide an alternative answer, using classical, (that is not quantum based) reasoning. It's just easier, for me anyway, to understand :), and, hopefully, to answer.

In classical electrodynamics, light is considered as an electromagnetic wave, which is described by Maxwell's equations. Light waves incident on a material induce small oscillations of polarisation in the individual atoms (or oscillation of electrons, in metals), causing each particle to radiate a small secondary wave in all directions, like a dipole antenna. All these waves add up to give specular reflection and refraction, according to the Huygens–Fresnel principle. 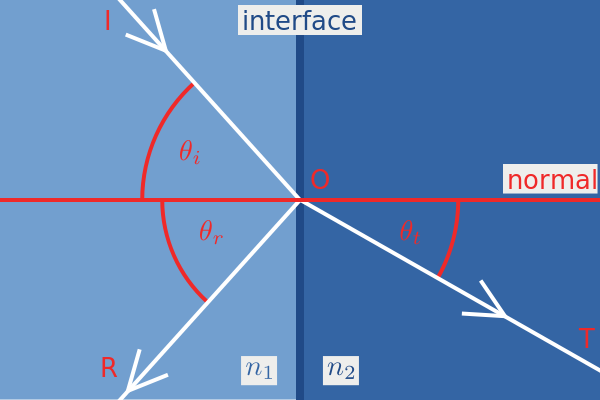 An incident light ray IO strikes the interface between two media of refractive indices n1 and n2 at point O. Part of the ray is reflected as ray OR and part refracted as ray OT. The angles that the incident, reflected and refracted rays make to the normal of the interface are given as θi, θr and θt, respectively.

The relationship between these angles is given by the law of reflection and Snell's law:

If you can follow the math, mostly just trigonometry, you can get the proportion of light passing through the glass, and the proportion that reflects, here:

It's not easy , for me at least, to immediately find an answer to your question based on QFT, as most of the QFT explanations seem to deal with mirrors and how they reflect light, rather than explain how some goes through the glass and some reflects, (as in your particular question), but a good explanation, which is basically a copy of Feymann's book, can be found here:

Just a thought. Is this due to atoms of different substances like water,glass or wood etc curve spacetime differently and thus it influences how photons interact with matter? i.e. some photons reflect and some refract.

I would say no to that reasoning, spacetime is not curved enough in a plate of glass to have a significant effect.

While I don't know the exact details of reflection off glass (it is related to solid state physics from what I recall, with plasmon and such pseudoparticles), this I know.

While individual atoms do only accept particular energy levels, this does not apply in general, due to several reasons :

Instead of thinking about it deterministically think about it terms of the probability that a photon will be reflected. These probabilities can be calculated using Quantum Electrodynamics. Check out this lecture series by Richard Feynman for a detailed explanation. https://www.youtube.com/watch?v=eLQ2atfqk2c

Not the answer you're looking for? Browse other questions tagged quantum-mechanics general-relativity visible-light electromagnetic-radiation quantum-electrodynamics or ask your own question.

11
Why do some materials reflect (metals) and other materials reflect and refract (glass) from the quantum perspective?
0
Theoretically, is it necessary that if light passes through a glass slab, its intensity should decrease?
24
How can my window not scramble the image of my yard?
0
Energy Levels: Reflection or Absorption and Emission / Color of Objects and Emission Spectrum
0
why does water absorb microwaves better than meat (or bread, or pizza rolls)? Why are so many things poor absorbers of infrared waves?
0
If a photon is powerful enough, will it not pass through glass?
2
How does a single photon behave propagating through glass?
2
Why do photons keep their polarization when they reflect?