I'm sure there are several misconceptions here and I'd greatly appreciate it if someone could help me identify and correct them.

When calculating tidal forces across an object, the earth for example, why does one neglect the gravitational force due to the mass of that object (the earth) and instead only consider the force due to the moon's mass?

To clarify, I am wondering why one does not consider the differing force of attraction between different point on (and within) the earth when calculating the tidal effects due to a satellite.

Here is the situation in which I'm trying to understand tidal forces:

The earth and the moon, some distance apart (but "fixed" in space, i.e. not orbiting each other and not accellerating toward each other). From what I've read, this situation should produce tidal bulges in both the near and far oceans.

Here is what I'm thinking:

On the point furthest from the moon, the forces of the earth and the moon on that point are in the same direction (toward the moon)

I fail to see how this produces tidal bulges on opposite sides of the earth.

It seems to work out correctly if one only considers the forces on the points due to the moon's gravity, but I don't understand why you're allowed to disregard the earth's gravity.

I feel that if I understood this quote from the link below, it may shed some light on the issue:

"Since we have taken the near-spherical earth as a baseline, and the tidal effects are superimposed on that, we can ignore the earth's own gravitational forces on itself, leaving only the forces due to the moon. They are the forces causing tidal effects."

The effect of earth's gravity is not disregarded. It is what keeps the earth in one piece and approximately spherical. This is the dominant effect in the the earth's vicinity. Without it the sun and the moon would most likely stretch and tear it apart, as would earth's own rotation. Tides are a tiny perturbation on top of this effect caused primarily by the moon but also a little by the sun. That is why only the effects of the moon and possibly the sun need to be considered explicitly.

The gravitational field of the moon is almost uniform in across the earth's immediate vicinity. However, a completely uniform field could not cause tides since it would act identically on every particle: it would pull equally on the solid earth and oceans at all points. Einstein's equivalence principle says that an observer in free fall cannot physically even detect the presence of the uniform gravitational field. It is therefore only the non-uniformity of the field that actually causes tides.

It then makes sense to subtract out the uniform component and only consider the non-uniform deviations. The moon's field is strongest at the point nearest the moon and weakest at the antipodal point. It also has a component towards the line connecting the centres of the two bodies at points that do not lie on that line, because all lines of force converge to the moons center. Therefore the nemaining non-uniform part of the field pulls away from the center of the earth along the earth-moon line, but pushes toward it in the plane perpendicular to the line. The nett effect is to make the earth slightly football/cigar/prolate-ellipsoid shaped. 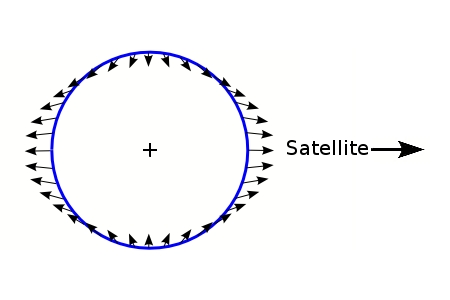 This has a far more pronounced effect on the oceans than on the solid earth, since water is a low viscosity liquid. This is what tides are.

If it were not for the earth gravitational field, these effects would make the earth really cigar shaped and eventually break it up since it is not a single rigid body, but more of a pile of rocks wrapped around a viscous core. Friction and viscosity would slow this process down but would not provide restorative forces. Also the oceans would shear off the earth completely.

The sun comes into play when considering spring tides and neap tides. The sun has qualitatively the same kind of effect on the earth as the moon but much weaker. It is still strong enough to modulate the effects of the moon:

A very good explanation of the ins and outs of tides is https://www.lhup.edu/~dsimanek/scenario/tides.htm That is where the above diagram is from.

The Earth's attraction of different parts of the Earth is roughly the same if you do not care about the equatorial bulge: Everest is only 9 km high on a 6370 km-radius planet, so that's only an 0.14% deviation from roundness -- and oceans don't even go that high; no tidal waves are lapping Everest. There are no substantial deviations in the Earth's attraction of its different parts.

Because of this, even though the Sun's gravitational force is much stronger than the Moon's, its tidal force turns out to be about half the strength -- it is just that much further away that the extra power of D tips the balance in the Moon's favor.

But isn't there a difference in Earth's gravity between antipodal points of the earth (opposite directions)?

I don't follow your statement above, but my sincere apologies if I have misunderstood your question and I will be happy to delete this answer if it does not work out for you.

I think you may be mixing up the Earth's tidal force on the Moon, leading to the Roche Effect and it's consequence's, with the Earth's effect on it's own oceans.

I can't see any other cause for your comment above.

Assume we can disregard topgraphical differences and difference in the Earth's actual shape, compared to a "perfect" sphere.

Consider the gravity of the Earth as acting from the centre of the Earth, on the sea level and therefore the tides, rather than thinking of gravity from the earth immediately below the sea having any overall effect. That is, ignore any local effects.

We could then, as Jimself's comment says, treat mean sea level as effectively an equipotential surface. There is no difference in Earth's gravity across it.

The Moon orbits the Earth in the same direction as the Earth rotates on its axis, so it takes slightly more than a day—about 24 hours and 50 minutes—for the Moon to return to the same location in the sky. During this time, it has passed overhead (culmination) once and underfoot once (at an hour angle of 00:00 and 12:00 respectively), so in many places the period of strongest tidal forcing is the above-mentioned, about 12 hours and 25 minutes. The moment of highest tide is not necessarily when the Moon is nearest to zenith or nadir, but the period of the forcing still determines the time between high tides.

Because the gravitational field created by the Moon weakens with distance from the Moon, it exerts a slightly stronger than average force on the side of the Earth facing the Moon, and a slightly weaker force on the opposite side. The Moon thus tends to "stretch" the Earth slightly along the line connecting the two bodies. The solid Earth deforms a bit, but ocean water, being fluid, is free to move much more in response to the tidal force, particularly horizontally. As the Earth rotates, the magnitude and direction of the tidal force at any particular point on the Earth's surface change constantly; although the ocean never reaches equilibrium—there is never time for the fluid to "catch up" to the state it would eventually reach if the tidal force were constant—the changing tidal force nonetheless causes rhythmic changes in sea surface height.

By now, you might have read this possible duplicate Tidal Bulges which leaves nothing unsaid, as far as I can see:)

Chris and Daniel have provided better answers than mine, on this page, but I think you are still thinking of local variations in Earth's gravity, rather than treating the Earth as a whole when you are considering opposing gravitational forces. 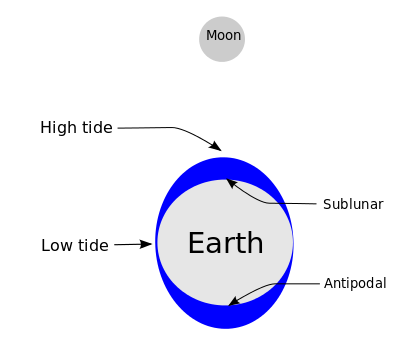 Not the answer you're looking for? Browse other questions tagged classical-mechanics newtonian-gravity tidal-effect or ask your own question.

206
Does Earth really have two high-tide bulges on opposite sides?
1
Why are tidal forces pointing away from the Moon?