Heavy elements couldn't form right after the Big Bang because there aren't any stable nuclei with 5 or 8 nucleons. 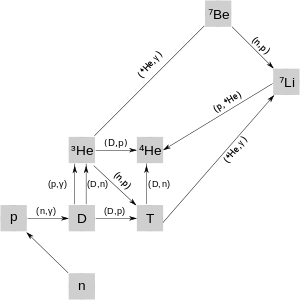 In the Big Bang nucleosynthesis, the main product was $^4He$, because it is the most stable light isotope: 20 minutes after the Big Bang, helium-4 represented about 25% of the mass of the Universe, and the rest was mostly $^1H$. There was only 1 nucleus of deuterium and helium-3 for each $10^5$ protons, and 1 nucleus of $^7Li$ for each $10^9$ protons.

Given these abundances, the most probable reactions to yield heavier elements would be $^1H + {}^4He$ and $^4He + {}^4He$, but neither produces stable nuclei. So instead we have only $^2H + {}^7Li \to {}^9Be$ and $^4He + {}^7Li \to {}^{11}B$. This reactions are extremely unlikely, since lithium was so scarce. It is predicted that one of these nuclei was form for $10^{16}$ protons. Abundance of the previous elements and cooling of the universe prevented the formation of even heavier elements.

On the other hand, in the first stars carbon formed in the triple alpha process, which is only possible with the density and helium abundance found in stars, and takes a lot of time. Subsequent nuclear fusions create heavier elements up to iron, and the energy released in the supernova explosion allows the synthesis of even heavier elements.

I just want to point out, too much energy hurts the building of elements process, it doesn't help.

Nucleosynthesis, from 3 minutes to 20 minutes: The temperature of the universe falls to the point (about a billion degrees) where atomic nuclei can begin to form as protons and neutrons combine through nuclear fusion to form the nuclei of the simple elements of hydrogen, helium and lithium. After about 20 minutes, the temperature and density of the universe has fallen to the point where nuclear fusion cannot continue.

So, over a billion degrees, protons and neutrons are too energetic to bind. Under a billion, they can begin to fuse and you begin to get hydrogen fusion into deuterium and helium.

But, there's a problem,

As the universe expands, it cools. Free neutrons and protons are less stable than helium nuclei, and the protons and neutrons have a strong tendency to form helium-4. However, forming helium-4 requires the intermediate step of forming deuterium. Before nucleosynthesis began, the temperature was high enough for many photons to have energy greater than the binding energy of deuterium; therefore any deuterium that was formed was immediately destroyed (a situation known as the deuterium bottleneck). Hence, the formation of helium-4 is delayed until the universe became cool enough for deuterium to survive (at about T = 0.1 MeV); after which there was a sudden burst of element formation. However, very shortly thereafter, at twenty minutes after the Big Bang, the universe became too cool for any further nuclear fusion and nucleosynthesis to occur. At this point, the elemental abundances were nearly fixed

This question is answered in detail by the so-called "Big Bang Nucleosynthesis", the theory about the creation of the nuclei in the early Universe. Almost out of nothing, it allows one to determine that 75% of the nuclear mass was coming in hydrogen, 25% in helium, and some small traces of lithium appeared, too.

Supernovae are a great environment for neutron capture. However, after the Big Bang, the density of neutrons goes down as the Universe expands; and after much more 10 minutes, the lifetime, the neutrons decay away. There isn't enough time to create the heavier elements.

So we're left with the composition created without processes like neutron capture. And those favor the energetically optimized nuclei such as the light three. The issue is really that it's not quite "high temperature" that is needed for the creation of heavy nuclei. The high temperature is "good" for the creation of energetically wasteful bound state; but it is also "good" for their destruction. The Big Bang is a process in which the temperature is going down so at the end, the energetically thrifty bound states (with higher binding energy) dominate.

Not the answer you're looking for? Browse other questions tagged cosmology nuclear-physics big-bang fusion supernova or ask your own question.

8
Big bang and time
19
How long will the Universe's hydrogen reserves last for?
2
How did the energy/entropy/volume/pressure/temperature relationship exist at the Big Bang and how did it evolve thereafter?
0
Why is the Big Bang the biggest explosion in the universe?
23
When did the first carbon nucleus in the Universe come into existence?
3
Is the rarity of elements related to their position on the periodic table?
1
What determined the amount of energy and matter in big bang
0
Was the Big Bang denser and hotter than a black hole?
3
Does it make sense to measure the time from the Big Bang until the CMB was emitted?