When a magnet falls down a tube, eddy currents form and flow around the tube, perpendicular to the direction in which the magnet falls.

However, when there is a vertical slit in the tube, are either no eddy currents formed (since they cannot complete a rotation), or alternatively do much smaller eddy currents form, as suggested by the following figure?

Further to this, a recent HSC (Australian Physics Examination) tested this, 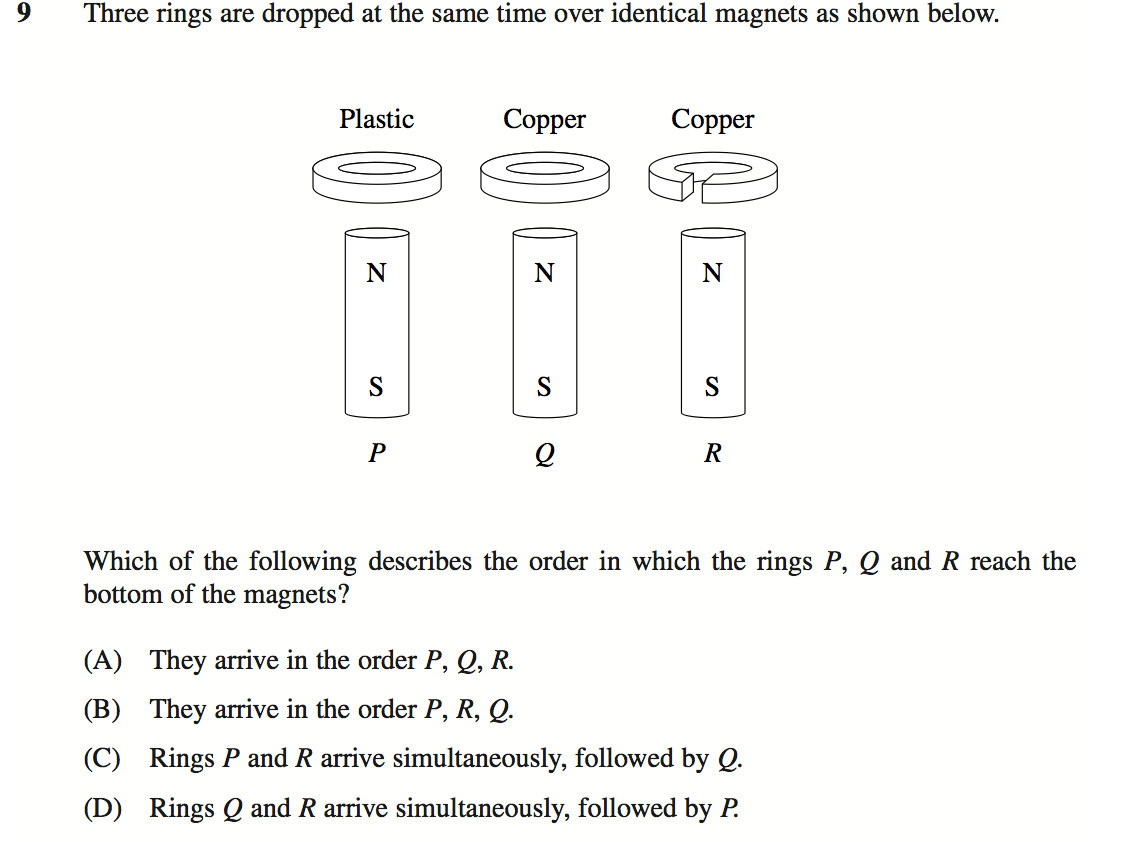 The official answer to this question C. If it is true that small eddy currents are formed, why then is this the case?

Yes, there should be smaller eddy currents formed when the tube has a slit in it. Those same eddy currents will also be formed in the tube without a slit, on top of the current that goes all the way around the circle. The important thing is that the primary current gets cut off by the slit, reducing the amount of energy dissipate compared to the slitless tube.

So, the answer I would expect to be correct would be that the falling order would be: plastic, slitted copper, and slitless copper.

That the answer comes out as the slitted copper and plastic ring hitting simultaneously isn't too surprising to me because the eddy currents in the slitted ring are quite small, and don't dissipate enough energy to slow the object down significantly. It's kind of like dropping an orange and a bowling ball at the same time - the bowling ball experiences more air resistance, but it should also have a higher terminal velocity because it has more mass.

It would be interesting to see this experiment done with a very long drop viewed by both high speed cameras and thermal cameras.

Not the answer you're looking for? Browse other questions tagged homework-and-exercises electromagnetism electric-current induction or ask your own question.

3
An objective question from electromagnetic induction
1
How might eddy currents and terminal velocity be broken down?
0
Reducing eddy currents, changes the property of the conductor & circuit?
3
Eddy currents Vs. Inducing EMF in opposing the change?
1
Magnet falling through a coil that does not form a circuit. Am I wrong or is the mark scheme?
1
A doubt regarding Lenz's Law
0
Eddy Currents and Lenz's law
2
Influence of Lorentz force on Eddy Current
4
Would a superconductor act similarly to copper when braking a strong magnet on a pendulum
0
Change in Magnetic Flux: Eddy Currents vs Moving Wire