I'm having a hard time understanding the nature of voltage and am hoping you guys can help. The main issue is the concept of the voltage drop. 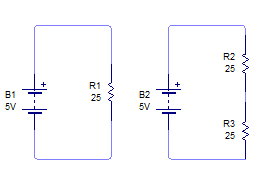 In regard to the first, we have a 5v supply, which from my understanding means that if you were able to enclose a coulomb of charge eminating from the negative terminal, you'd find that it has 5 joules of energy.

This means that each electron eminating from the negative terminal has :

(relative to an electron entering the postive terminal)

and one leaving must have 0 energy.

This leads me to a few questions :

2) If the electron loses all its energy on exiting R1, why does it still end up moving to the positive terminal? If it's still moving to it, doesn't that mean it's got energy?

3) Why doesn't resistance value have an effect on the total energy loss of an electron passing through the circuit?

I understand how this can be explained through ohms law, and I understand that KVL tells us this must be the case, but I want to understand what is physically going on (what the electrons are doing), as opposed to what the equations say.

I'd also appreciate an answer without using an anolgy if possible, as anologies generally always lead me to more questions.

In regard to the first, we have a 5v supply, which from my understanding means that if you were able to enclose a coulomb of charge eminating from the negative terminal, you'd find that it has 5 joules of energy.

This isn't the typical understanding. A 5V (ideal) supply (source) maintains a 5V potential difference across the terminals independent of the current through.

It follows that 5 Joules of work is done by the source on 1 coulomb of (positive) charge in moving through the source from the more negative terminal to the more positive terminal.

There is 5V across R1 but only 2.5V across R3. Why? There twice the current through R1 than through R3.

If the electron loses all its energy on exiting R1

However, the exiting electrons have less potential energy.

Why doesn't resistance value have an effect on the total energy loss of an electron passing through the circuit?

The resistance has an effect on the power (rate at which work is done); the electrons must lose the same amount of potential energy in travelling through the resistor(s) (all else being equal) but the number of electrons per second is reduced when the resistance is increased.

Power in a circuit is defined by P= I x E

P is power in watts or joules per second

E is the electormotive force or voltage

the energy of the electrons is lost to heat

in your second circuit R2 and R3

the electron still has energy leaving R1 because not all the voltage of the circuit is dropped across R1 some voltage even though very small is dropped across the wire or conductor it self. the power supply sees the load as RW+R1 . RW=the resistance of the wire

question 3 should be answered above as well

I'd like to start with a slightly pedantic aside: I think you should try to avoid the phrasing of electrons "having energy"; what they have is potential energy, and potential energy is relative. This is important to remember.

Question 2 is trivial, so I'll answer that first: there is no such thing as zero resistance, so the wire from R3 to the batter's negative terminal is better thought of as simply a minimal resistor; if we were to rewrite the problem this way, we'd see that some voltage was left to carry the electrons through it back to the battery.

A completely accurate answer can only be reached through quantum mechanics, but a pre-quantum model, the Drude model, does provide a relatively intuitive, physically meaningful, and surprisingly accurate result. I will not go into the math, because you can find it on Wikipedia, and I would be basically copying that, but I'll try to give you a qualitative answer, which I think the Wikipedia article is lacking somewhat.

We can think of a resistor as a gas of free valence electrons, interspersed with atoms which are, from the electron's point of view, immovable objects. The electrons bounce around between them, but because there is an electric field pushing them in one direction, they tend to drift that way; we call this current. Since the charge of a resistor in these problems is neutral, the number of electrons doesn't change with voltage or current; a higher voltage simply means that the electrons are accelerated more between collisions, and thus their average speed, which is always in the direction of the current, is greater.

However, because the electrons are moving faster, the "mean free time", the average time between collisions, is shorter; they bump into atoms more often. Because a collision is as likely to push the electron backwards as forwards, more collisions means less progress; the about half of the collisions convert work that the field did accelerating the electron forward into backwards motion.

I know you said you didn't like analogies, but let me try a bad one anyway: it's easier to walk through a forest than to run. (This is bad because obviously you can avoid trees, but an electron can't, but whatever. I tried. An almost perfect analogy would be a board with a bunch of nails on it, at a slight angle; the steeper the angle, the more trouble a marble would have getting through; it would still get through faster, but it would come out the other end having lost a greater portion of its potential energy to nails.)

First, a couple of asides:

A. When circuits are drawn, the convention is that straight lines represent perfect conductors. Any real resistance is shown as a resistor, and hence, gets included in any IR drops. You don't go and say "well, there are some other resistances." If they are important, they are shown. Circuit analysis of diagrams is done with this assumption. Same thing for any stray capacitance or inductance. If they are important, you show them.

C. The power consumption of a closed circuit system is zero. The battery supplies power, and the resistors consume power in this circuit. Power comsumption is calculated for each element and then summed. It is calculated with $P_{consumed}= IV$, with $I$ being the conventional current travelling from high potential end to the low potential end ($I$ might be negative).

Now, the real answer for why the electrons continued to move in the circuit is conservation of charge and continuity of flow. Charge is not building up anywhere (like a capacitor), and the battery is continually changing the energy of the electrons.

The total resistance does have an effect. It changes the flow rate of the electrons which changes both the energy supply rate of the battery and the energy consumption rate of the resistors.

Your question is right but imagine a ball at some height; so ball has potential energy and when it moves towards the earth surface, it losses some energy due to air but other part of the energy is used to make velocity and this velocity is only zero when it strikes with the earth surface: this means that when an electron strikes with a positive plate, then its energy becomes zero meaning when electrons are leaving from resistance, then they have energy and it will become zero when they strike with positive plate. this further means that when you are measuring voltage across resistance it indicates 5J energy is given to minus one Coulomb charge but it is not indicated 5J energy is used.

42
I don't understand what we really mean by voltage drop
2
Why, microscopically, is the voltage drop across a resistor affected by the current through it?
1
Voltage Drop Across a Resistor / Direction and Sign of Voltage
4
How does electrical energy in parallel work out?how does less energy travel through more resistance
0
Why is voltage drop same in parallel?