I was hoping someone could please explain how the transmission of light through a sub-wavelength aperture in a metal film, at a particular wavelength, changes when the aperture is:

From what I've been reading, I gather that above cut-off width there are propagating modes and below cut-off width then tunnelling occurs. If this is correct, could someone please explain the differences between the two processes in this situation?

Any help would be appreciated,

If the aperture width is above cutoff width, then as you say, there are propagating modes. This means that the aperture acts as a waveguide, with a propagation constant $\beta$ with a real part much larger than its imaginary part. (The imaginary part of $\beta$ quantifies damping.) A good reference for waveguides is Snyder & Love, Optical Waveguide Theory.

A propagating waveguide mode has a certain spatial extent. If the aperture width is below cutoff width, then the mode literally does not fit inside the aperture, and so the aperture acts as a very bad waveguide, with a propagation constant $\beta$ which is purely imaginary; so there is no propagation, only damping.

However, electric fields can't just stop discontinuously at the entrance of a waveguide. Even a waveguide mode with purely imaginary $\beta$ will have the field reach into it a little bit. The field will drop off proprortionally to $e^{-i\beta d}$. If the waveguide is short enough that there is any electric field left by the time it gets to the end, then it will turn back into free radiation on the other side. This is called tunneling. An illustration might help to make this intuitive: 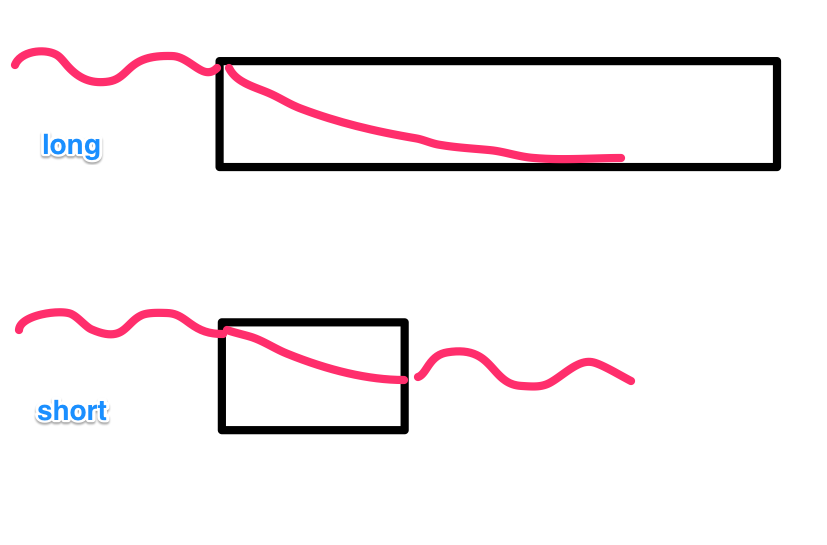 The vertical axis is field amplitude (very hand-wavy because I also drew a sine wave to show a propagating mode, but the amplitude certainly doesn't vary like that) and the horizontal axis is distance.

There is no direct relationship between the metal's skin depth and the cutoff width. Rather, the skin depth influences the value of $\beta$, and $\beta$ determines how thin the metal film must be for there to be any appreciable tunneling.

Note that in the case of a perfectly conducting metal film, which is a decent approximation if the film is gold, silver, or aluminum, and the light is of an appropriate wavelength, then there is no skin depth. In this case, it is only the waveguide aperture size and wavelength of the light that decide whether a mode is propagating or not. In the realistic case, this is still the biggest factor.

Not the answer you're looking for? Browse other questions tagged electromagnetism optics electromagnetic-radiation waveguide plasmon or ask your own question.

8
How can I determine transmission/reflection coefficients for light?
6
Fiber optics with broadband, incoherent light
1
Wavelength and Frustum shaped resonant cavity
3
Can someone please explain extraordinary optical transmission (EOT)?
2
Similarities between light and other frequencies of EM waves
29
Why is UV light visible when reflected off paper?
0
How does the wavelength of incident light and de-Broglie wavelength of molecules in a medium affect macroscopic properties of the medium?
0
Refractive index variation with wavelength of light
0
Is there a difference between metal waveguides in microwave frequencies and dielectric waveguides in optical frequencies?