Is the Sun dusting my electronics?

I recently noticed this odd dust formation on my gaming console's camera peripheral. The dust is significantly thicker on the right side, with the television in the background. On the left, with a West-facing window in the background, there is very little dust. I did not touch the peripheral since last dusting the entire thing. What caused this formation? Have any of you witnessed a similar phenomenon?

I have a guess, but I'm not convinced. For about one hour each night, as the sun sets, the left side receives direct sunlight, and the right is blocked by the TV, pretty much as the dust-made line represents. This sunlight heats up the black casing, which induces convection preventing dust from falling on the hotter, sunlit part of the thing.

I wouldn't expect this to cause such a disparity, though. Even an all-day effect doesn't quite make sense, because we leave the blinds closed during the day. The only way I can see such a disparity occurring is if the heating of the casing not only prevents dust from settling, but can remove settled dust, leaving a nearly dustless surface on the left, with many times more on the shadowed right.

Edit: To those suggesting charge has built up on the sun-exposed side, how would such a charge prevent dust from collecting? Am I mistaken to assume that a charged surface could only attract dust (and not repel it)?

Note: With a teacher home for the summer in the apartment, the TV seen in the picture has been on for at least 8 hours a day. I'm not sure this has any effect, but it might rule others out. 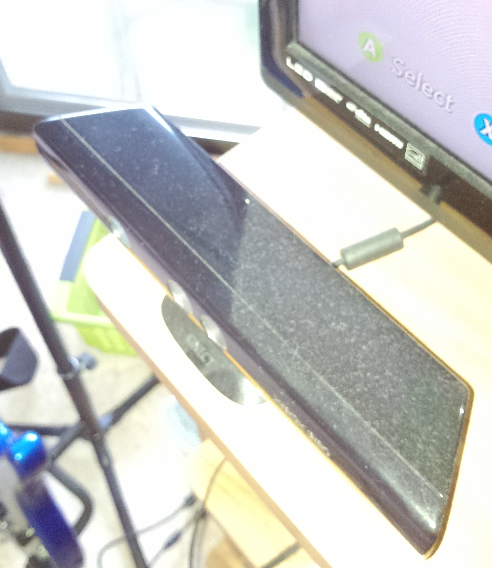 This certainly will prevent particles from landing on a hot surface. It should also be able to remove dust particles that are not too strongly attached via van der waals forces.

Not the answer you're looking for? Browse other questions tagged everyday-life or ask your own question.

11
Why does the Sun feel hotter through a window?
1
Extreme heating by Sun on Earth- Can eggs be fried?
5
Why does the Sun turn red near sunset?
0
Sun radiation in England
0
Apparent size of sun
0
Under a bright sun, can we see the shadow of an overhead power line on the floor?
0
Why do we feel the sunlight the second the sun gets out of the clouds?
17
Why does the sun “beat down” harder in the summer - or does it?