(Left is a laminar separation, Right is a turbulent separation)

I have been having a bit of trouble understanding this concept. How come the laminar separation involves a much larger wake than the turbulent one? I would think that it would be the other way around due to the fact that a laminar flow is more organized and less chaotic that turbulent. Any explanation would be greatly appreciated.

Deliberately introducing turbulence can often reduce overall drag, counterintuitive as it seems. On the wing of this aircraft, you can see vortex generators fitted along it's length.

From Wikipedia Turbulent Flow and Drag

In turbulent flow, unsteady vortices appear on many scales and interact with each other. Drag due to boundary layer skin friction increases. The structure and location of boundary layer separation often changes, sometimes resulting in a reduction of overall drag. Although laminar-turbulent transition is not governed by Reynolds number the same transition occurs if the size of the object is gradually increased, or the viscosity of the fluid is decreased, or if the density of the fluid is increased. Nobel Laureate Richard Feynman described turbulence as "the most important unsolved problem of classical physics.

Vortex generators, small metal plates, are often fitted to aircraft wings to control where on the wing the laminar flow will separate.

No matter what you do, the laminar flow will eventually separate, so it's better to control where it happens, especially if it can help in increasing the efficiency of control surfaces.

I would think that it would be the other way around due to the fact that a laminar flow is more organized and less chaotic that turbulent.

Turbulent flow resists change better than laminar flow because, in a way, it has a life of it's own, and small airflow changes may get damped out, but with laminar flow, it is much easier to disturb it and cause it to separate from the wing. 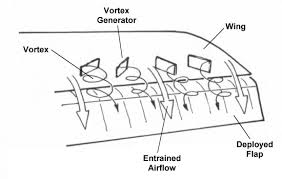 Golf balls and aircraft wings explains this idea in much more detail, (and is much better than my answer all round.)

The higher the fluid velocity relative to the surface, the lower the pressure. In the turbulent case the higher relative velocity leads to lower pressures near the surface such that pressure from the surrounding fluid further away from the surface (the same in each case) forces the streamlines towards the surface for a longer distance compared to the laminar case.

A laminar flow is certainly "nicer" than a turbulent one, but that is not always what you want when you want to reduce drag. In particular, there's no obvious reason why dragging fluid around (via a laminar wake) is going to be better than casting it off, as shed vortices go.

In particular, keeping the main part of the vortex around will mean that you've got a continuously-reinforced low-pressure system behind you. Shedding it means that it can go on its merry way, and stop sucking you backwards. You can therefore think of it as trading a constant drag for a sawtooth wave of sorts.

Not the answer you're looking for? Browse other questions tagged fluid-dynamics flow turbulence or ask your own question.

19
Why aren't airplanes like golf balls?
12
Which travels further, a football or a soccer ball, when thrown?
0
Pressure in wake of turbulent vs laminar flow

1
Is this the reason solids suspended in turbulent fluids don't settle?
4
What's the shear rate in a turbulent flow?
19
Why aren't airplanes like golf balls?
0
Fire tornado experiment: turbulent vs laminar flow of air?
1
Turbulent flow and Separated flow
1
Is theoretically possible to have the laminar flow above $Re=10^7$?
3
Concept behind Reynolds number
2
Is there such thing as a non-turbulent wake?