I'm trying to solve the two body problem numerically, setting up $G$, $m1$ and $m2$ to be equal to 1. then I located each mass on positions -5 and 5 respectively along the $x$ axis and gave them both 0 on the $y$ axis. I'm having trouble finding the initial conditions fitting for circular movement. Please help!

You can see why with the below diagram from the Wikipedia entry on circular motion,

At any one of the four cardinal points, the velocity is purely in the tangential direction. For example, consider the top point; it is at $(x,y)=(0,1)$ with a velocity of $(v_x,\,v_y)=(-v,0)$. You can do the same analysis with the other 3 points. So rather than trying to determine a random $(x,y)$ point, you can simply use the cardinal points to set the positions and velocities.

The radius, $R$ of each circle will be the distance from the mass to the center-of-mass point. Calculate the Newtonian gravity force on a particle, set it equal to $mv^2/R$, where $R$ is the circle radius but the Newtonian gravity is calculated using the distance to the other particle. Solve for $v$. This is the speed perpendicular to the line separating the particles. The direction of this velocity needs to be updated every time step, so you'll have to do good vector algebra.

Setting the initial conditions is only the beginning of the problem. Consider using the Verlet velocity algorithm. A simple Euler's method will deteriorate quickly.

Below are a few shapes of different orbits: 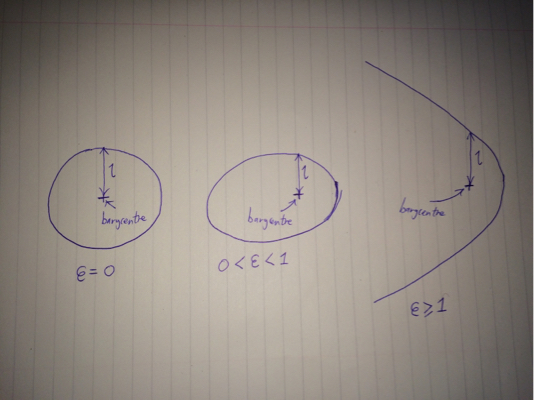 There are two parameters that govern the shape: the eccentricity, $\epsilon$, and the semi-latus rectum, $l$.

$\epsilon$ is how much the shape varies from a circular orbit. $\epsilon = 0$ is a circular orbit. For low values, the orbit is elliptical. Higher values yield open "orbits", where the body only passes by once.

$l$ is a particular length dimension perpendicular to the line of symmetry, governing the general size of the orbit. Doubling $l$ doubles the orbit size.

So you can define the shape of an orbit. For the general orbital set-up below: 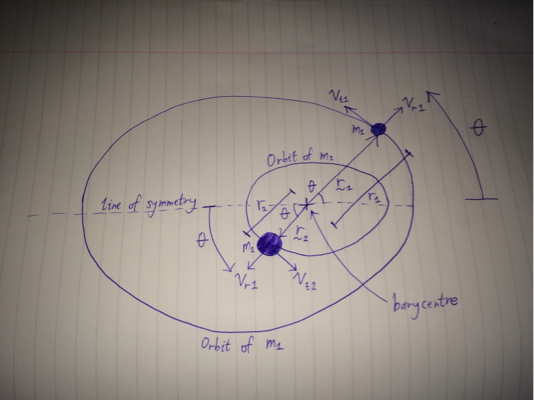 The two masses have orbit shapes with different semi-latus recti ($l_1$, $l_2$) but the same eccentricity.

You can determine the initial distance, and velocities from the shape of the desired orbit you wish to simulate, and the starting angle, $\theta$. Here are the relationships for mass 1:

Then the initial condition for mass 2 can be given by:

And that should do it! Note that putting $\epsilon = 0$ will get you the same results for the usual circular orbit.