Like many others, I have marveled at the images made available from the Hubble Space Telescope over the years. But, I have always had a curiosity about the color shown in these images. An example is shown below. Are the colors we see, such as the yellows, blues, and so on the true colors or are they applied by some kind of colorization method to enhance the image quality for realism. 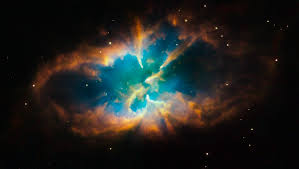 The raw Hubble images, as beamed down from the telescope itself, are black and white. But each image is captured using three different filters: red, green and blue. The Hubble imaging team combines those three images into one, in a Technicolor process pioneered in the 1930s. (The same process occurs in digital SLRs, except that in your camera, it's automatic.)

Why are the original images in black and white? Because if Hubble's eye saw in color, the light detector would have to have red, green and blue elements crammed into the same area, taking away crucial resolving capability. Without those different elements, Hubble can capture images with much more detail.

As an interesting aside, the Wide Field Camera 3 sees in wavelengths other than visible light, as do the Cosmic Origins Spectrograph and the Space Telescope Imaging Spectrograph.

NASA goes into a litte detail about the process here, as well as some of the rationale behind choosing some colors. Some of the reasons for using artificial colors include showcasing elements whose emission lines are out of the visible spectrum, and showing features that are too dim at visible wavelengths. Remember, CCD detectors usually don't see the same things that humans do, and Hubble can see outside the visible spectrum.

The classic color mapping for Hubble is described in Flase-color astrophotography explained.

What you have is (in the Hubble palette):

An example of this for true color from John Nassr at Stardust Observatory at Coming to Life Again…. Hubble’s 25th Anniversary Honored with New Hi Definition Photo of Pillars of Creation in the Eagle Nebula: 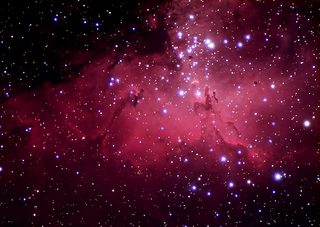 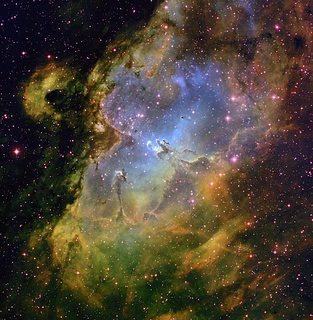 You will note that the true color image is dominated by red - which is the Hydrogen alpha, and Sulfur-II lines (which show up as reds, greens and yellows in the false color).

The colors in astrophotography are specific remappings of frequencies into other frequencies so that our eyes are capable of perceiving the subtle differences between different emissions from elements. Otherwise, we have difficulty seeing the structure that is there and indicated by different elemental densities in the nebulae.

I will point out that the H/S/O palette given above isn't the only one. The image in the question has a link to the fastfacts tab which states:

The image is a composite of separate exposures made by the WFPC2 instrument on the Hubble Space Telescope. Three filters were used to sample narrow wavelength ranges. The color results from assigning different hues (colors) to each monochromatic image. In this case, the assigned colors are:

I find myself now answering my own question but only because the comment feature is not suited to this "comment". I have selected the answer by @HDE 226868 as my answer and primarily due to the linked Space.com reference. Very good answer to my question.

In particular, I also thought this quote from the same page as being important as these reasons (below quote) for adding color were more of what I originally thought they were doing:

The Hubble team uses color in three ways. First, for objects that would otherwise be too faint for the human eye to see,the team adds color to make the objects visible. Second, the team uses color to depict details that the human eye can't see, like astronomical features only visible in infrared or ultraviolet light. Third, color can highlight delicate features that would be otherwise lost.

Not the answer you're looking for? Browse other questions tagged astronomy telescopes or ask your own question.

9
Automated telescope system
4
Can the Hubble telescope bring any star into focus?
7
What are the minimum telescope requirements to view a nice spiral galaxy?
19
Why don't we have a better telescope than the Hubble Space Telescope?
0
Does an uneven and/or moving surface affect quality when using a solar filter?
8
Why is the Hubble Space telescope able to see farthest in the universe?
3
Telescope size to view saturn
5
How to produce a loss-free combination of two "identical" beams?
33
How do we stabilise satellites so precisely?