Misconceptions about the universe - Hubble Sphere

I recently watched Veritasium's (excellent) video "Misconceptions about the Universe". However, he said something (at 2min 25s) which I think is wrong. Can somebody please clarify this one way or the other? This is really bothering me - actually this is driving me crazy. I checked the comments and some of the comments also disagreed with him. The precise line is:

But, due to the accelerating expansion of space, our Hubble sphere is actually getting bigger

from which Veritasium's argued that light from distant galaxies currently outside our Hubble sphere can actually cross the sphere (the sphere basically engulfs it) and the light can then proceed towards us. This doesn't sound right to me.

Veritasium then responded to commenters saying he thinks Wikipedia is wrong and cited a journal paper cited paper to back his argument up. I have read the paper and I'm still not convinced but it's certainly made me feel less confident in what I "know".

So what's my problem?

Basically, my understanding is/was that if the Hubble constant was also constant in time, there would be a sphere of fixed radius where all things move away at the speed of light. Objects inside that emit photons that will reach us. Objects outside emit photons that recede from us. End of story. No ifs, no buts.

If the Hubble constant was not actually constant in time, for instance take the universe's expansion to be decelerating, then I imagine this sphere to be growing outwards. Therefore, it is perfectly reasonable that photons that were emitted outside the Hubble Sphere (and thus initially are receding) might get caught by the growing Hubble Sphere and can then begin their journey towards us. Whether I am right or wrong, this is a fundamentally geometrically intuitive picture to me.

In contrast, if the expansion were accelerating, I think the sphere should be shrinking and galaxies that emit light inside the Hubble sphere (and the photons are initially moving towards us) might actually get caught by the Hubble sphere and then find themselves out in the cold, receding from us. And given that the 2011 Nobel Prize was awarded for the accelerated expansion of the universe, I think the Hubble Sphere should be shrinking (counter to what Veritasium said) and that objects currently outside the Hubble Sphere will never emit light signals that can reach us (counter to what Veritasium said).

This Redditor seems to share my exact confusion although the thread was never satisfactorily resolved. DilithiumMatrix wrote a post that seems to tally with my understanding. I thought all galaxies will eventually end up outside the Hubble sphere and the Milky Way will have a very lonely, sorry existence indeed.

Am I talking sense? Can someone please put me out of my misery?

ps this is absolutely not a personal attack on Veritasium. I love his stuff. I just want to understand this point of confusion.

Kyle Kanos makes the point that "am I right questions?" are not ideal. Fair comment. I'm not going to delete my reasoning as the hope was that someone could better hone in on my misunderstanding if I offered it. Anyway, there's a lot here that needs clarifying for me.

Finally, given Veritasium had a lot of comments disagreeing, he subsequently responded with a comment that got 890 likes, it seems a lot of people are not clear on this point.

Ok, so I've finally got to the bottom of this. Basically, the confusion stems from what it means to say the universe is accelerating so let's clear that up. The Hubble parameter is defined to be $H(t)=\dot a(t) /a(t)$ where $a(t)$ is the scale factor. When we say that the universe's expansion is accelerating, we mean that $\ddot a$ is greater than zero. This absolutely does not, however, tell us anything about $H(t)$. $H(t)$ could be increasing, it could be decreasing or it could even be constant.

The de Sitter model, for instance, describes a universe in which the Hubble parameter, $H(t)$, is actually constant in time. That is, $\dot a(t) /a(t)=H_0$ which has an exponential solution for $a(t)$ but, for the most part, $H(t)$ can be decreasing or increasing despite $\ddot a$ being greater than zero.

How can I see this?

Right, picture two cars driving apart with an infinitely elastic bit of tape between them. They have some markings on them which you can think of as galaxies (or comoving coordinates). I've drawn three sets of pictures and I will explain them each in turn. 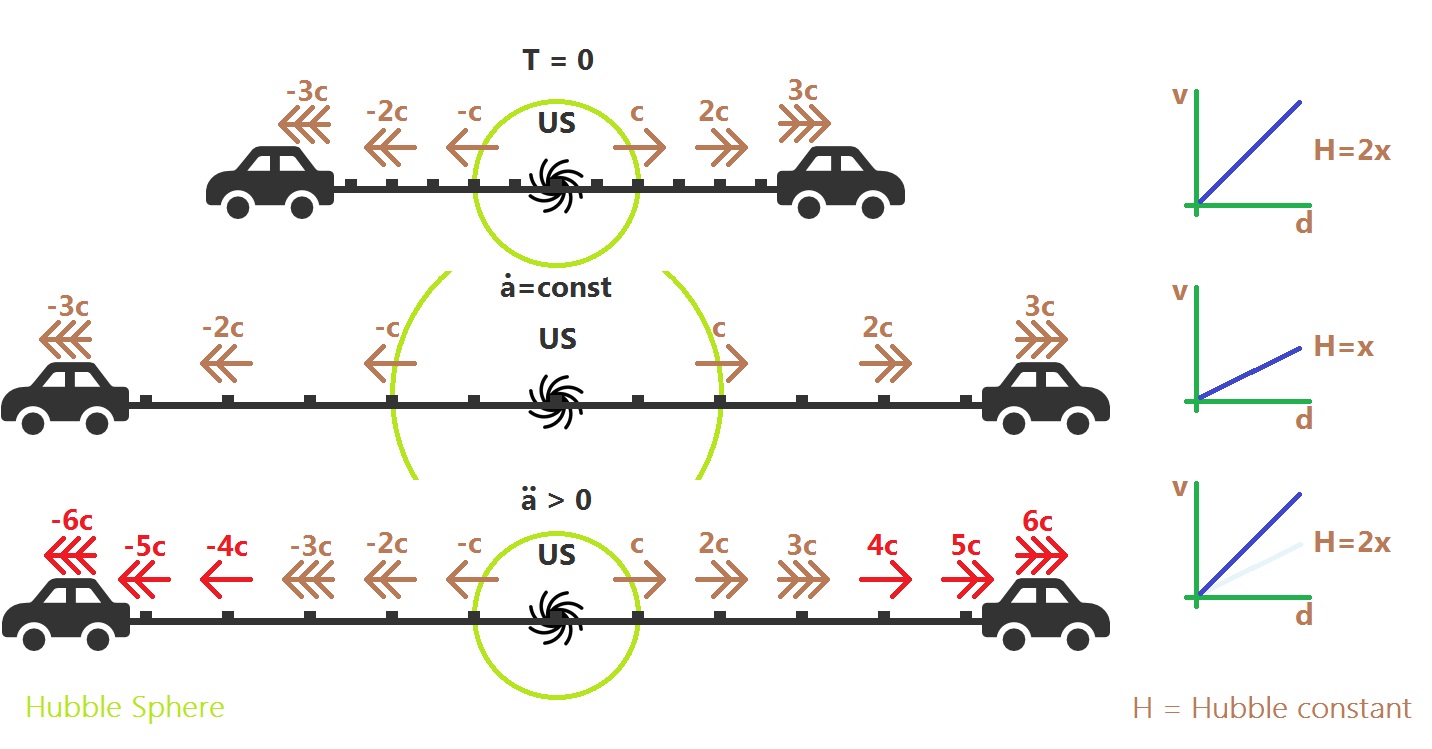 First consider two cars driving apart at speeds $3c$ (ignore the unrealism of that claim - I'll take $c$ to be $10$mph) with us at the centre. These cars are not accelerating. These cars are driving away at $30$mph in opposite directions. Somewhere along the tape, there's a Hubble Sphere where comoving galaxies are receding away at $c$ (or $10$mph). I've marked it in green. We can draw a chart of recession velocity, $v_{rec}$ against proper distance, $d$, and see that there is a linear relationship between the two. That is, things 2km away from us are moving twice as fast as things 1km away from us. The Hubble parameter, $H(t)$, is the gradient.

Keep with the idea that these cars are not accelerating and let's have a look a little while later. Remember, they're not decelerating either. Everything got pulled apart and the Hubble Sphere goes along for the ride. Think about it - if the cars are still going $30$mph then our Hubble Sphere is still one third of the way along the tape from us. Importantly, if the Hubble sphere is growing it can start capturing photons that were once outside the Hubble Sphere and, once these photons are inside, they can start their journey towards us. We will see these photons. Note that the gradient of our $v_{rec}-d$ plot has tanked as the Hubble Sphere expanded.

Ok, let's add acceleration or, for the mathemagicians, $\ddot a(t)>0$. What happens now? Well, it depends on how hard the cars are accelerating. In my example, I made the cars accelerate just hard enough that the Hubble Sphere maintains constant size. Notice the gradient staying constant in the chart to the right (cough, de Sitter cough). In this case, the photons outside are stuffed. They're never getting in. End of story.

But what about if the car didn't accelerate all the way to $6c$ ($60$mph)? What about if they only reached, say, $5c$. Well in that case, the slope on our plot would have dropped a bit, our $c$ marker will be one fifth of the way along and our Hubble Sphere will have moved out a bit. What was that? The Hubble sphere moved about even though the universe's expansion is accelerating? Bingo.

How do we fit into all this?

Believe it or not, we think we're in that last camp. The 2011 Nobel Prize was awarded for the discovery that the universe is (or cars are) accelerating. But it's not happening at a rate fast enough to maintain a constant sized Hubble Sphere so the Hubble Sphere is also growing. Because it's growing, we can capture more photons from galaxies that are currently receding away at superluminal velocities. These photons can then begin their journey towards us.

Was Veritasium right? Well... he wasn't really wrong. Then again, saying "due to the accelerating expansion of space" isn't really right either. Perhaps he should have said, "due to the decreasing Hubble parameter..." instead. Oh well... who cares. This took a long time for me to figure out - I truly hope it helps someone else out.

This is answered here: https://www.physicsforums.com/threads/why-is-the-hubble-sphere-expanding.616551/

So The Hubble "Constant" has been and still is getting smaller since the beginning of time. It's at about 70 km/s/Mpc and will stop at about 60 or "H=Λ/3". Its getting smaller at a slower rate originally because the matter density of the universe is decreasing more slowly but now the rate-of-H-slowing has decreased even more because the Universe is feeling the acceleration as Dark Energy dominates. "Acceleration of the expansion today just means that the Hubble parameter is decreasing less rapidly than before. But it's still decreasing." Eventually the acceleration will reach a peak and H will be a constant. That is paraphrased from the physics stack, so I don't want credit, which has a much clearer explanation than here above but details above still educate.

As space/universe lessens its rate of expansion (Hubble constant, about 70km/sec per mparsec), as is currently the case, the Hubble sphere increases and vice versa. The notion that the Hubble sphere increases with accelerated expansion of space is incorrect (Veritasium et al.). To understand the characteristics of the Hubble sphere we must first understand the expansion of space. If we were to travel to an object 1/2 mparsec from earth we would find it receeding at 35km/sec. If we continued outward to an object 1 mparsec said object would be receeding at 70km/sec. But, keep in mind, all the little bits of space between earth and these bodies are expanding at a uniform rate. But all those little bits of expansion add upon each other. The more little expanding bits between 2 objects, the faster the rate of seperation. So if we continued outward from earth we would eventually reach a point where objects are receeding at the speed of light (Hubble sphere). Light emitted from an object at this point would never reach earth. But if all those little bits of space decreased thier rate of expansion we would have to travel farther to reach a point where the recession speed equals light speed (Hubble sphere expands), and if those little bits increased thier rate of expansion we wouldn't have to travel as far realize light speed recession (Hubble sphere shrinks). If those little bits didn't expand at all there would not be a hubble sphere, Light from all distant objects, given time, would reach earth.

The Hubble expansion law is that the apparent speed of a galaxy is proportional to its distance away from us:

The radius of the imaginary Hubble sphere is defined to be the radial distance at which the gradually increasing galaxies' apparent recession speeds become equal to light speed:

And so an object outside the Hubble radius will obviously stay outside.

Not the answer you're looking for? Browse other questions tagged cosmology space-expansion event-horizon or ask your own question.

62
Can space expand with unlimited speed?
25
What is the theoretical limit for farthest we can see back in time and distance?
11
Is the edge of our Hubble Sphere within our Cosmic Event Horizon and why?
11
A Cosmological horizon at the Hubble radius?
6
Why does the Hubble parameter keep getting smaller if the expansion of the universe accelerates?
0
Can we see beyond the Hubble Volume?

7
When will the Hubble volume coincide with the volume of the observable Universe?
10
Will acceleration rate of expansion of space become faster than speed of light?
1
How does measuring redshift make us conclude that rate universe expansion is accelerating?
11
Is the edge of our Hubble Sphere within our Cosmic Event Horizon and why?
7
Accelerating expansion of the universe: so?
0
Is the Universe being dragged into a singularity rather than expanding?
1
Should the potential of a point charge be taken from the Hubble boundary instead?