It can be inferred that the amount polarisation $ P $ is dependent upon and proportional to the magnitude of the electric field $ E $ applied: 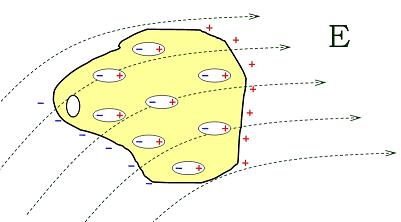 Convention dictates that vectors regarding electric charge must point from the positive charge to the negative, implying that

What is the justification for the vector direction that allows $\hat{\mathbf{P}}=\hat{\mathbf{E}}$ by equation 1 when the arrangement of charge suggests the opposite?

The reason is simple: the convention is that the polarization vector goes from negative to positive, not the other way around.

Why? Because both charges exert forces, but the $q/r^2$ gets weaker the farther away you are so you still point away from the positive charge and towards the negative charge.

Now if you imagine the distance between the charges as getting smaller eventually it looks like the field just comes into the dipole over where the negative charge was and jumps out the other side where the positive charge was.

That vector is the polarization vector. Check out the gif at wikipedia https://en.m.wikipedia.org/wiki/Electric_dipole_moment#/media/File:VFPt_dipole_animation_electric.gif

Now a real electric dipole has that field pointing the opposite direction in between you can approximate it with an ideal dipole which doesn't have that space between the charges.

If it helps, you can think that the vector pointing from negative to positive is your reminder that you are approximating it as if the charges were on top of each other (closer than they are really) and you changed how strong the charges were. Not because it was accurate, but because that was pretty close to the correct field when you are not very close.

Not the answer you're looking for? Browse other questions tagged electromagnetism electric-fields polarization or ask your own question.