What is the total internal reflection?

From what I read, it sounds like when a light ray passes from one medium to the other, if the critical angle is reached so that the refractive ray is at 90 degree with the normal, the light ray does not enter the second medium but stays in the first. (not sure about this)

Since it's called total reflection, I assume there to be no refractive ray at the 90 angle. But this picture confuses me: 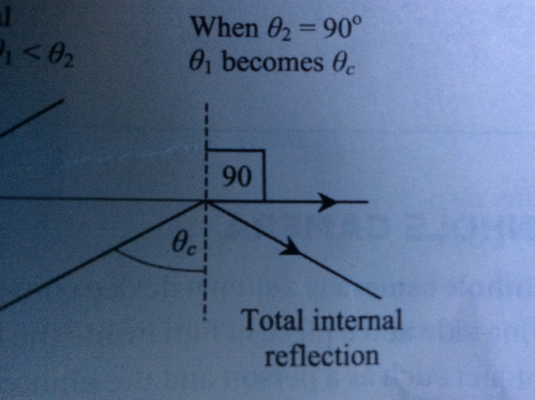 The books says that all rays are reflected. But I am not sure the one ray at 90 counts as an reflective ray.?

My guess based on the pic, is:

To summarize, my questions are

So at the boundary, what's really happening is: the frequency of light must remain the same (wave crests/troughs cannot exit any faster than they enter) and therefore the different speed of light changes the wavelength of the light.

Of a certain intensity of light, a proportion $T$ transmits into the new medium and a proportion $R$ exits. The barrier does not absorb energy, so $T + R = 1.$ It can only absorb momentum perpendicular to its surface, so there must be conservation of momentum in the other direction. Now for a light wave, the momentum is proportional to the inverse of the wavelength $\lambda$, so if $\theta$ is measured from the line perpendicular to the surface, momentum balance in this region means:$$\frac{1}{\lambda_1} ~ \sin \theta_1 = \frac{T}{\lambda_1}~\sin\theta_1 + \frac{R}{\lambda_2}~\sin\theta_2$$Conservation of momentum and energy therefore together give us Snell's law, since you can work out that if the frequency stays the same then $\lambda_1 / \lambda_2 = n_2 / n_1.$

You need another equation to successfully pin down the exact value of $R$ and see how it varies with respect to $\theta_1.$ This other equation is harder for me to explain, and it comes from the continuity of fields, which makes it polarization-dependent.

Typically light is a wave made of two fields, an electric and magnetic field, that oscillate perpendicular to each other, and perpendicular to the direction that the wave goes, too. So if light is going "up" then possibly the electric field is oscillating east-west while the magnetic field is oscillating north-south. The energy is contained in the square of the amplitude of these oscillations, and, if the wave is moving at a speed $v$, the magnetic field's amplitude is usually related to the electric field's amplitude by $E / v$. A full writeup of how exactly all this works is available here.

First off, observe that this is actually really well-defined for $\theta_2 = \pi/2$, which is when we know $\theta_1$ is critical: it limits to 1. For all $\theta_1$ less than this, we get a reflection coefficient R which smoothly increases from 0 to 1 before abruptly having a "kink" at 1 (because Snell's law can no longer be satisfied beneath that point and so it stays $R = 1$). And this means that $T$ goes to 0.

More specifically, if you are shining a laser pointer from the bottom of a swimming pool, straight up towards the surface of the water (perpendicular), the beam will not bend. As you increase the angle of incidence (measured from the normal), the beam exiting the water will bend away from the normal. At the critical angle, the beam exits the water surface parallel to the surface. Any angle greater than the critical angle causes the beam to reflect back into the pool, and no fraction of the light beam escapes into the atmosphere (you get total internal reflection).

Regarding the "jump" in the reflected ray, it isn't actually a jump. At all angles below the critical angle, part of the light ray is refracted and escapes into the atmosphere and part is reflected back into the pool. The amount of refracted light progressively diminishes as the angle of incidence increases (measured from the normal). At the critical angle, a small portion of light escapes the pool and a large portion is reflected.

If you want to see this phenomenon for yourself, and you can hold your breath for a fairly long time, find a calm swimming pool and quietly dive down in the deep end until you are a few feet underwater. Look up, and you will see light from the outside world, but only up to the critical angle. This will give you a view of the outside world that looks like a circle, and every image outside that circle will be reflections from inside the pool.

But I just wanted to point out the statistical mechanics perspective as this may give you an additional insight.

Index of refraction (squared) is proportional to the number of optical modes that can be supported in a material.