Why does an image form at the intersection of light rays? 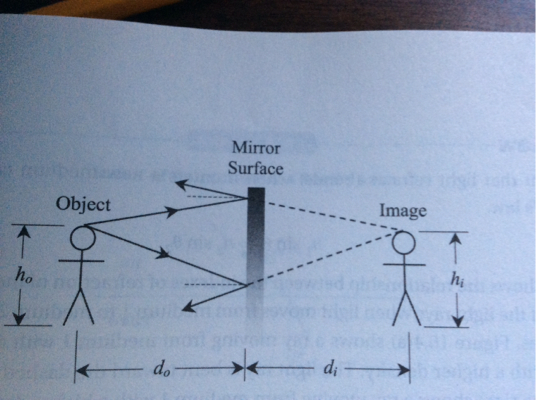 If image is simply what we see, then why, when light rays bend in the atmosphere, enabling us to see the sun, is there no intersection of rays?

The concept is strange. I can not relate it to anything else I learn in physics to try to give it an explanation. Seems to me each light ray carries a picture of the last thing it gets reflected off of. Very very strange.

Normally when you look at something, you experience the light rays that come directly off of the spot you looked at, going into your eye. When you look directly at the sun, this is what you see, more or less. You see the sun in spite of atmospheric effects, not because of it!

The sun is very far away, but we can see it directly by looking at it, because it is so intensely bright. Not everything is so bright, though, and often we can't see things in the distance because of this. This is why we use lenses and it works something like this.

Objects emmit light in every direction. When we look at an object we only see the light that is travelling directly from the object into our eye in a straight line. What we would like to do is bend some of the light that does not reach our eyes, such that it does reach our eyes. This way the apparent brightness of the object will go up, and we can see the object more clearly. The lens is constructed to make this happen.

You see in the picture you provided that there are two rays coming off the object. Normally, an observer (at the right side of the lens) would not see these rays, but the lens bends them such that they all travel towards a special location, the focal point, where they intersect. This is where you want your eyeball to be, in order to see the object (or you can use a projection screen to act as an eye for you.) If your eyeball is not exactly at that location, the light rays that were perfectly gathered at the focal point start to move away from each other again. This will be observed as a fuzzy image, and we call it out of focus.

It has to do with convolution.

Suppose the original figure was simply a point of light, emitting rays.

Its rays will convolve with whatever they interact with.

The image plane is where the convolution function reduces to a point (i.e. delta) function, so it reproduces the original light source. If the light source is two points, the light from each source is convolved with the delta function to form a separate point. This is how the image is formed.

The intersection of rays - or convergence of waves to a focus in the Maxwellian picture - is indeed absent in the atmosphere, or from most of the light field that you're steeped in.

The lens imparts a curvature on the wavefront that reverses the divergence that a wave output from a point source undergoes in propagating from its source to the eye's lens. The curvature is such that it makes this reversal nearly exact for the distance you are focussing at through the adaptive optic system comprising the conscious will to fix your gaze at something and the lens actuated by lens muscles. Objects nearer to or further from the eye than this focal length are slightly out of focus, but, because a focus is not the cone shaped ray bundle in ray optics but rather a hyperboloid shapen field intensity map, the focal "waist" of this hyperboloid can be quite long in axial extent, particularly when, as in the eye, the lens is imaging at low numerical aperture (high f-number). The hyperboloid waist is what gives rise to the "depth of field" notion.

The purpose of focusing optics is to make it so that a significant fraction of the photons which are emitted from some point on an object will have a significant probability of being directed through a particular point in space associated with that point on the object. For simplicity, assume a two-dimensional world and consider a lens with a nearly infinite coefficient of refraction which is almost infinitesimally thin and has nearly-flat sides, oriented vertically along the Y axis, positioned so that any light which enters along the X axis will pass through and continue along the X axis. Imagine further that a bunch of photons leave from a point on an object which is on the axis (i.e. its Y coordinate is zero), and proceed to strike the lens.

The slope of every such photon which hits the lens will be equal to the change in Y coordinate where it left the object to where it hits the lens, divided by the change in X coordinate. If the object is at (Xo,0) and it hits the lens at (0,Yi) the slope will be -Yi/Xo. To make all such photons strike a common point (0,Xf) on the X axis on the other side of the lens, they must leave with a slope which is equal to -Yi/Xf (note that the Xf and Xo have opposite sign, so the slopes do likewise). Focusing lenses work by changing the slope of the photons passing through them by an amount which is proportional to the distance from the axis. The amount by which the lens changes focus when hit at position (0,Yt) is -Yi/Xf-(-Yi/Xo), or Yi/Xo-Yi/Xf.

The fact that a significant fraction of the photons which depart from a particular spot on the object will pass through an associated point some distance from the lens means that the number of photons that would strike a target placed at that spot would be proportional to the amount which leave from the corresponding origin point, thus making it possible to estimate how many photons are leaving the origin point by determining how many strike the target.

I think there is confusion because there are many meanings of the phrase "intersection of light rays" that do have meaning, but I think the picture you show suggests you are being mislead by the image. There is a concept of "intersection of light rays" which is very meaningful when discussing lenses and how they focus the photons onto the retina. However, I don't think that's what you're looking at.

In the mirror picture drawn, the lines are actually rather misleading. Consider this as a raytracing problem... we're going to follow photons on their journey. Take any point on the person's body... let's say its a freckle, just so it has a name. Photons from the lightbulb hits the freckle and are emitted in all directions. Now every single emitted photon is going to end up somewhere, but that's a lot of things to keep track of. We're only going to keep track of the photons which will end up hitting the eye. The only photons that are going to get there are those which can reflect off the mirror at the perfect angle to hit the lens of the eye. The other photons exist, but we're not going to worry about them, because they wont affect the image.

The photons we care about are those within a narrow angle. how narrow? About half as wide as the arrows drawn on your chart... those arrows are confusing. What you're actually looking for are all the lines which go from the freckle, to a point on the mirror, and back to the eye.

Where do the extra lines they drew come from? I honestly don't know. It looked like they wanted to show some congruent geometry to prove a point. The photons do not "bend" at the mirror as they show it in the picture.

3
Why is an image formed when two light rays coming from an object intercept?

0
What is the total internal reflection?
1
A Question About Thin Film Interference
0
How does the diaphragm in a camera work?
0
How do lens capture reflections clearly?
4
Do reflected and incident rays interfere?
0
Incongruence in virtual image position on a convex parabolic mirror
4
Why does an image only form where light rays coming from a single point get reflected or refracted and converge to a common point?
2
How do we perceive object distance in refraction/reflection?