Why spinning a pen makes it easier to remove it from the stand?

I have a ballpoint pen stand on my desk. The pens are held inside their caps with the point down, like this one (but not as fancy): 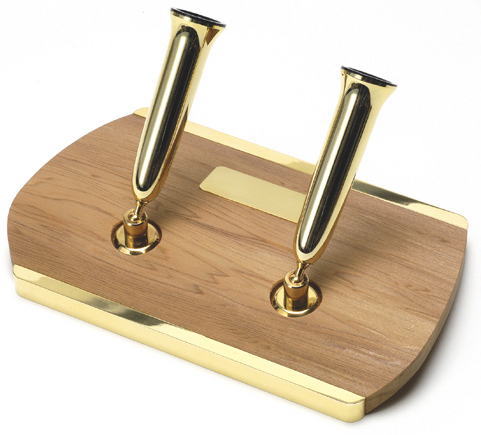 If I try to simply pull up one pen, the friction between cap and pen is strong enough to lift the stand, instead of simply removing the pen from the cap.

But If I spin the pen while pulling, it comes out without even bumping up the stand.

Why spinning the pen reduces the friction against the pull?

Info requested by the commenters:

You may want to read about the functioning of frictional force (what happens between the surface at atomic level) in detail to understand the above stated inequality.

You are overcoming the static friction, which others have noted is generally greater than dynamic friction. But, the force needed at the point of contact is presumably the same when twisting versus when lifting, so why the difference in the behavior of the stand (lifting up, versus just sitting there)?

The reason is because of the direction the force is applied. Let's say a 250g force is needed to overcome static friction of the pen in the holder. If you pull upward on the pen, then if the holder is lighter than 250g, then you'll lift up the stand rather than remove the pen.

But, let's say you twist the pen hard enough to exert a 250g force on the boundary between the outside of the pen and the inside of the holder. This is applying a torque, and if the torque is strong enough the holder will twist. How strong would the torque be?

Let's say the pen outside and holder inside are 1cm in diameter, and the stand itself is 15cm across. The torque produced by your 250g at the surface of the pen is equivalent to that produced by about 17g at the edge of the holder. If the holder weighs, say, 200g, then trying to twist it with less than a tenth of that force seems likely not to budge it.

Edit: So, now you have the pen spinning; why can you lift it up without still lifting the stand? Because you've already overcome static friction; you only have to add a small vertical force to start removing the pen from the holder.

(Yes, there's a whole lot of "let's say"s in there; if you post actual weights and dimensions I'll get more concrete.)

This is not a complete answer, but by spinig the pen you give to your system the same energy as if you pull it out directly, in two diffrent forms.So the ''spinning'' energy overcomes the friction and the rest pulls out the pen.

For the same reason if you try to push a block or your coffee mug placed on the table it take some force before it move but when it starts moving you can lower the amount of force you applied but the block/mug keeps moving.