Is it true that spring has more force acting on it at its positive maximum amplitude than than at the negative one? 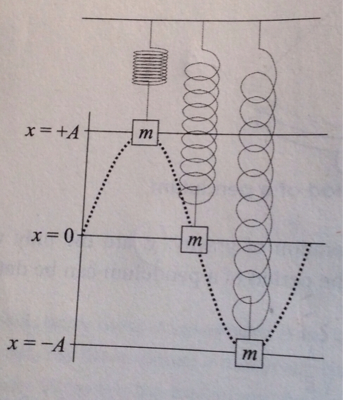 It seems obvious to me that at $+A$ and $-A$, the spring has restorative forces equal in magnitude but opposite in direction. But since gravity is always pulling it down, the spring at position $-A$ must have less net force acting on it. But my book says that at both positions, the spring has its maximum $\sum F = ma$. How does this make sense?

The equilibrium position in this case is not where the spring is not stretched, it is actually stretched by a $\Delta x$ amount with $F_{spring}(0) = k\Delta x$.

You have to notice that in this equilibrium position

the same hold for the -A position

In accordance with Hooke's law the force is linear with distance. Incorporating gravity only means that the equillibirum position of the spring has changed, the "zero" around which it oscillates. The gravitational pull is already compensated by the spring. Thus the magnitude of the force is euqal at $-A$ and $+A$.

Edit: When the gravitational pull on the mass on the spring is considered, the spring elongates. This results in a new equillibirum position $x'_0 = x_0 + \Delta x = x_0 + \frac{m g}{k}$. Since the force is always (in Hooke's regieme) linear with distance, you can just neglect the gravitational force since it is compensated by the spring. It is a simple superposition of forces.

The answer is no. The net force at the maximum elongation points has the same magnitude. This is because the rest point of the spring is modified by the gravitational weight of the mass. The mass oscillates around this new rest point, and at the points of maximum amplitude the net force is the same. One can tell that the gravitational force can be "integrated out".

Not the answer you're looking for? Browse other questions tagged newtonian-mechanics newtonian-gravity harmonic-oscillator spring equilibrium or ask your own question.

12
Why is a book on a table not an example of Newton's third law?
0
Newton's third law of motion, and the collapse of objects under heavier weight
2
Distance between coils on a massive spring
13
What force causes the ball to move up?
8
Newton's Third Law As Discussed in Den Hartog's Mechanics
0
Velocity is zero, but acceleration is not?
1
Better understanding natural resonance frequency and simple harmonic motion
0
How does tension work for a simple pendulum? What force is at play to keep a rigid body from stretching?
1
Why is the force of gravity positive for an oscillating spring?
2
What forces are required to physically separate two bodies in a gravitational system?