Why can't we see light travelling from point A to B?

Let's say we have a cloud of dust which is a lightyear across and someone shoots a beam of light from point A to B , why it is not possible for an observer far far away to see the light while it travels through the cloud at the speed of light? 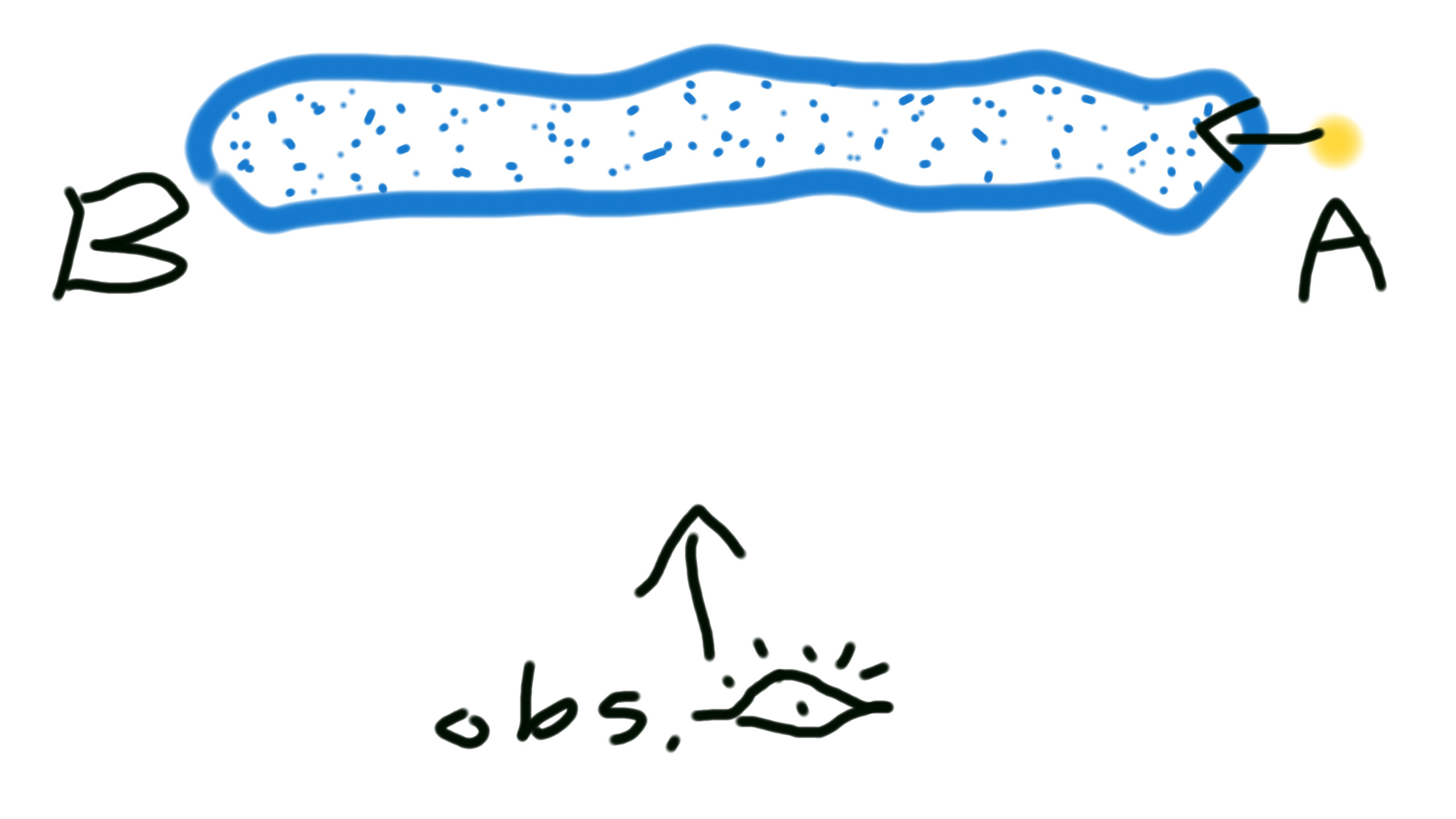 Sometimes we do, and the phenomenon is called a light echo.

What you're looking at there is NOT moving gas. It's an "echo" exactly as you describe.

The problem is that you need a pulse of light. If you have a constant stream of light, the "light echos" will be exactly like what you see in fog on earth.

It would be possible to see the progress of photons through space if the light pulse were exceedingly intense, and if the dust cloud from which they reflect were positioned and shaped to reflect the light toward us. Rather than shooting a beam from Point A to Point B, it would be better if the light source were between us and the dust cloud, as light reflected off the cloud would appear more intense to us and more likely to be seen by us. It's best if the pulse were instantaneous, as otherwise it would appear to be an expanding diffuse gas ball with no interior detail, as John Rennie points out in his comment.

All these conditions were met by the link which NeuroFuzzy provided, which appears to be time lapse photography of a pulse of light from V838 Monocerotis echoing off of a dust could behind it, the most spectacular light echo in the history of astronomy, according to the European Space Agency.

It is much brighter than even a supernova, but it is not exactly an explosion. The light from the initial pulse reached the earth in 2002. V838 Monocerotis didn't lose its outer skin. Instead, it expanded enormously in size, until its outer skin was not much hotter than a light bulb. This is very unusual behavior and may have been caused by one star cannibalizing another.

The animation of the light echo does NOT depict ejected debris. What you see is the light itself reflecting off of interstellar dust that is mostly behind the progenitor, not in front of it. The light echo forms an expanding ellipsoid with V838 Monocerotis at one focus and we observers at the other. It's concave toward us. A good description is in the Wikipedia article, which is the last link below.

Here is an account of the event, and an even better time lapse video, thanks to the Hubble telescope: http://www.theatlantic.com/technology/archive/2014/06/space-cannibalism-is-beautiful/373260/. It's fascinating to see the progress of photons themselves as they cover vast distances.

Here is a more complete history of the event, with a bibliography: http://www.phschool.com/science/science_news/articles/enigmatic_eruption_v838.html.

The wikipedia article also includes a good bibliography of references to this light pulse and the subsequent light echo: https://en.wikipedia.org/wiki/V838_Monocerotis.

The observer may use past experience about the behavior of light etc. to infer that the source of the light is not the dust particles but A, and that any light not dissipated by dust will reach B. For example, in the following image, we can infer that the source of the light is the sun and that some of the light, not dissipated by particles in the air, will likely reach particular spots on the ground in that field. Here, we can also see that some of the light reaching those points on the ground is reflected back to the observer, confirming the inference. 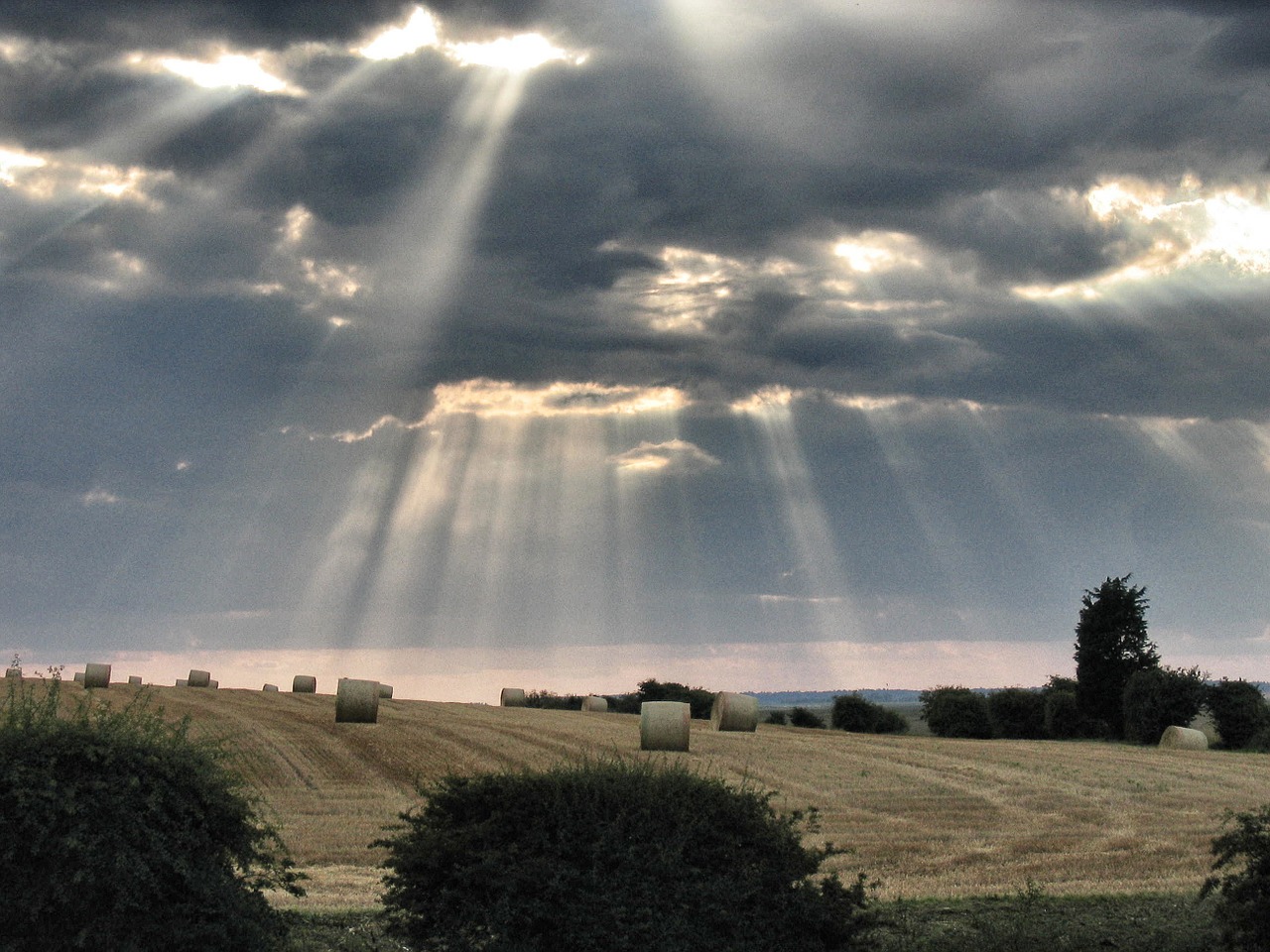 The observer, illustrated as an eye, is a light detector which only detects light reaching it, the observer, not light which doesn't reach it. (That's the short answer to the question.) The observer will also have to wait whatever time is necessary for the photons to go from A to whatever it's being reflected off of, to the observer.

By contrast, in this second photo, certain frequencies of light are reflected from B (points on the ground) to the observer, but the path the light is following is not as clearly shown because of the differing amount of particles on the path between those ground-points and the light source. 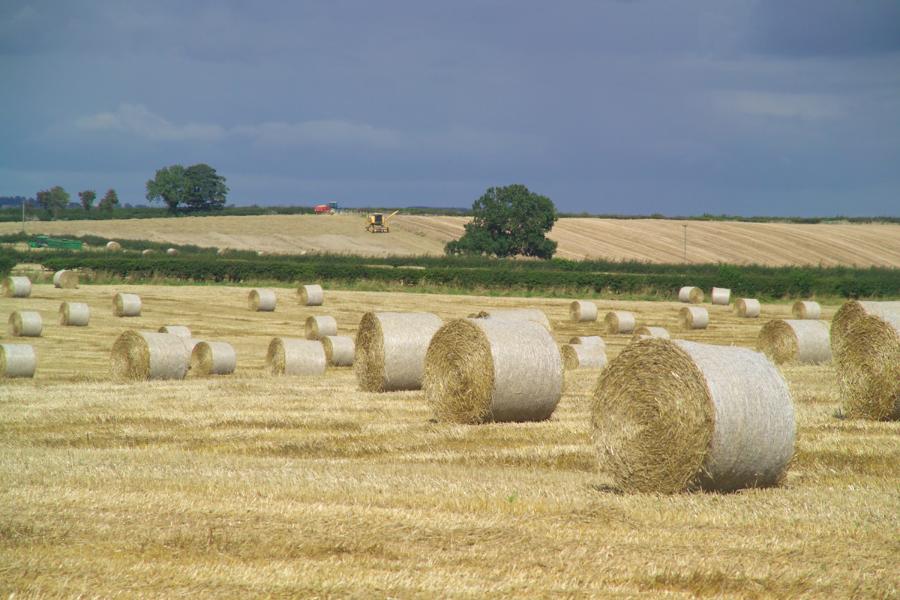 Using a camera that can capture "Motion at a Trillion Frames Per Second", this can be done at the laboratory scale. The technique used has been called femto-photography.

Of course a camera that literally takes one trillion full frames per second is totally impossible with today's technology. Assuming 1000x1000pixel frame size and 3 bytes per pixel, such a camera would have to output a total raw data rate of at least $3*10^{18}$ bytes/second or 24 billion Gigabit/second!

Instead, the photographed scene must be repeatable (i.e. totally still and variations in ambient lighting eliminated). A laser is used to send many short pulses of light into the scene. As well as as illuminating the scene, the pulse of laser light triggers a streak tube, which effectively captures one scan line of image. With multiple repeated exposures, the scan lines can be built up into an image, and multiple images into a full-motion video. The trick is in careful synchronization of time and viewpoints.

You throw a ball, and it hits the sensor: Detected!

You throw a ball across the sensor from left to right... no detection, because you didn't hit the sensor.

Your eyeball is a light sensor, which creates pictures from the light that hits your optic nerve. You can't see light that doesn't enter your eye.

My masters project was on something like this (though with hydrogen alpha emission lines for gas clouds between galaxies rather than dust between stars) and the answer in that case (and almost certainly in this one too) is that you can't see it because it's just too dim, though using hundreds of telescope hours can get you close (maybe).

(that wasn't me but was the paper I referred to most often.)

Under the conditions stipulated, the question is a false statement. We would, in fact, be able to "see" the light beam between points A & B. As the photons travel from point A to B, some photons will be deflected (by colliding with the dust particles) in our direction, allowing us to "see" the beam. Only in the absence of dust particles (or any other particles), we would not be able to see the light beam.
To avoid complications due to light intensity, big distances, and diffusion, the experiment is done in a lab, using a laser beam, and the distance between A & B equals a light-nanosecond.

If the photon you described is going to move from A to B, there's no reason you can see it at position C. Because if you were able to see the photon, it had moved from A to C, where you are, not B. Therefore, you are not able to see the path light travels through, unless, as others said, something like an atom deflects it. In all the answers above, something has reflected light so that it comes to the photographer's camera. Otherwise, it's impossible to see that photon.

Not the answer you're looking for? Browse other questions tagged visible-light photons astronomy speed-of-light or ask your own question.

9
Why can we only “see” reflected light?
-4
If we can see the light reflected off objects, why can't we “see” light?

0
How does the photon differentiate between events?
2
Light coming from distant stars
2
If the speed of light is constant in all reference frames, why does the mirror clock experiment show light travelling on an angle?
0
Observers without point of reference can assume themselves to be at rest