How can the magnetic field surrounding a current-carrying wire ever be uniform?

My book says that to find the force a current-carrying wire exerts on a moving charge, one uses $B = (\mu_0 / 2\pi)(I/r)$ to find the magnitude of magnetic field around the wire, and then uses that to find $F_B = q v B \sin\theta$, which is the same formula as that for uniform field between the planes of a permanent magnet.

How can the field around the wire ever be uniform since intuitively it weakens as distance increases?

The field around the wire isn't uniform. When you calculate the force on a charge in a magnetic field, you use the value of the field at the point where the particle is. So, $$F_B = qvB\sin\theta$$ is not just for a constant field. If the field varies from position to position in space, then the force the particle feels will also vary. This equation is introduced with a constant field because the math is easier and because the resulting motion is a simple circle.

So, when you calculate the force of a current-carrying wire on a particle, the resulting force is only for that moment in time. If the particle moves towards or away from the wire, the force on the particle will be different. $F_B = qvB\sin\theta$ is always true, but that doesn't mean the force is constant.

Below is a picture of a proton traveling at $10\ m/s$ next to a wire carrying $1\ A$ of current. The proton starts off at the bottom of the picture traveling upwards parallel to the wire in the same direction as the current. 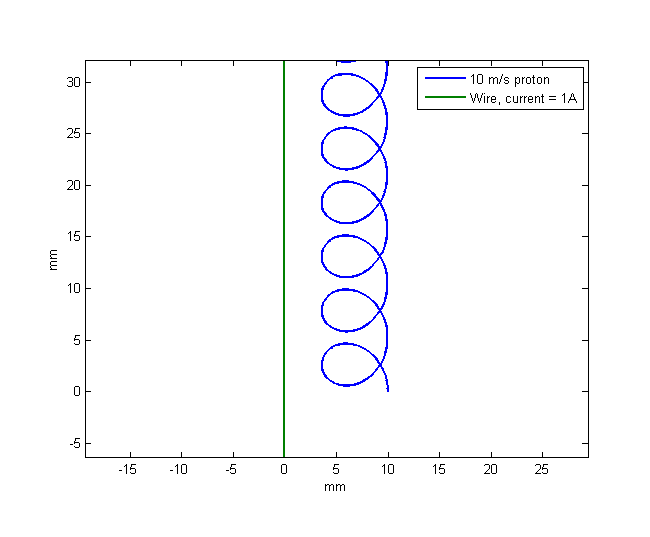 Notice that as the proton gets closer to the wire, the magnetic field increases, so the turn gets tighter. Once the proton turns $180^o$, it starts moving away from the wire, and the turns become wider.