Why do we see brown light?

While researching about lasers (it's my hobby), it suddenly hit me: there are lasers for every color of the visible spectrum, but there are no brown lasers.

Brown isn't even on the rainbow. How is it possible that we can see it?

Even stranger, brown as a color is produced with red and green, but when you mix red and green light, it makes yellow. Now this is where it gets VERY interesting: There are forbidden colors, colors that cannot be perceived by the human eye though they are a mix of perceivable colors. They are caused because the cones devoted to complimentary colors will cancel each other out. Red-green is one. Blue-yellow another.

I don't think it's a coincidence that while brown is, for some unknown reason, not on the visible spectrum but still perceivable, it reflect out red and green, components of a forbidden color.

I also don't think that it's a coincidence that magenta does not lie on the rainbow, is nevertheless perceivable, and that it reflects...blue-yellow?

This may be a source of your misunderstanding.

The way humans perceive color is by having three types of photoreceptors in their eyes. Each of them has a broadish response function which means, that the "green" receptors react well to pure green light (as in 555nm), but also are somewhat excited by yellow (589nm) and hardly respond to red (>600nm). The same reasoning goes to the "red" receptors, which respond well to red (632nm, for example), but the yellow (589nm) also affects them somewhat.

Therefore, when you shine a red and green light onto a white screen, it reflects both red and green photons, exciting both "red" and "green" photoreceptors in your eye, which the brain interprets then as yellow. But similarly, you can simply illuminate the screen with a yellow light and get a 589nm wave, to which both mentioned types of receptors are sensitive. As a result, they're both excited and the brain again interprets (this time correctly) this as yellow. (see first figure)

Now the way pigments mix is slightly different. A pure pigment absorbs all light, except light of its color. Again, not perfectly, but with a relatively broad response, i.e. a green pigment may reflect some blues and yellows, but the main part is centered on the green. Similarly, a red pigment absorbs all, but red. So when you mix the pigments, qualitatively you're summing up their absorption functions. The presence of red prevents you from seeing much of the reflected green light, conversely, the presence of green prevents you from seeing much of the reflected red. However, in between, where the yellow lies, their response functions overlap and they reflect (although strongly suppressed), some yellow.

This dark yellow, smeared over a wide portion of the spectrum is perceived as brown. (see second figure)

Fig. 1
Brain identifies "red" and "green" receptors to both be strongly excited in roughly equal parts. It figures, the wavelength of incident light to lie at the point where they are equally sensitive and concludes, that incident light is yellow. However, it may just as well be equal amount of red and green photons. 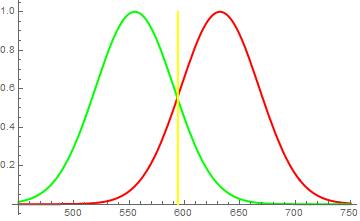 Fig. 2
Red and green pigments have - qualitatively - these kind of reflection spectra. When you mix them together, you get the worst of both worlds: neither green, nor red is reflected particularly well, some residual reflection remains in between. 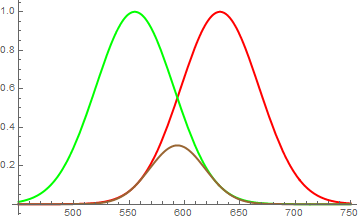 Not the answer you're looking for? Browse other questions tagged visible-light laser vision perception or ask your own question.

66
Is it possible that there is a color our human eye can't see?

10
What are colors?
0
The color purple in a rainbow
0
Is purple in visible light?
1
Human colour perception – summary needed